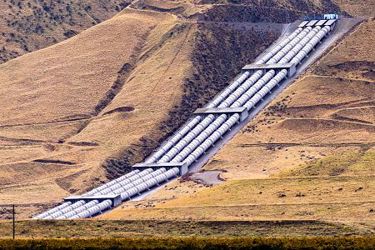 Officials in a major U.S. city that has struggled with water scarcity since its founding now believe they are on the path toward fundamentally solving the problem — even as drought hits historic new levels.

“Leaders of Los Angeles — a metropolis forged by water heists from distant lands — think they’re on a path to drought resilience,” BNN Bloomberg reported. “Heavy investments in water storage, rainwater capture and reclamation are serving towards a goal of supplying 70% of the city’s water from local sources by 2035.”

While the plan is ambitious, it may be that Los Angeles has little choice but to swing big. California’s Sierra Nevada snowpack is now estimated to potentially disappear forever in the next 25 years, nearby San Francisco has declared a water shortage emergency, and late last year the state of California officially termed its ongoing drought to have grown from “extreme” to “exceptional.”

By improving storage, reclamation, and rainwater capture capacity, Los Angeles could rely less on piping water in from other places that are increasingly drying up. It’s a vision for the future that is already well on the way, and none too soon.

“The city is planning massive upgrades to its wastewater treatment plants to make that water potable,” per BNN Bloomberg. “This is a key piece of L.A.’s water-security puzzle: to source 35% of the city’s water from recycling, up from 2% currently.”

Meanwhile, massive groundwater treatment facilities are being raised in the area as are efforts to stem pollution of these sources. New catch basins and inlets to recharge aquifers are in the works as well, with the hopes that these will double the city’s rainwater capture capacity in the next decade and a half.

With billions of dollars pouring into the effort, L.A. will be significantly advancing its drinking water treatment operations as it seeks additional drought resiliency. A groundwater treatment facility set to open in the San Fernando Valley, for instance, will use sand separators to flow water into a cartridge filter, then an advanced oxidation process. Hydrogen peroxide and UV disinfection will be leveraged to remove contaminants, per BNN Bloomberg.

But perhaps the most significant change taking place is the region’s growing acceptance around potable reuse and recycling, once a public non-starter. The growth of this practice could help combat source water scarcity nearly anywhere in the world.

“Attitudes have changed,” BNN Bloomberg reported. “Other parts of Southern California have shown that reclaimed water is safe to drink, and public awareness has grown to the point that what L.A. is planning at its sewage treatment plants no longer seems novel.”