Trouble In Paradise, And A Plan To Alleviate It

While San Diego has a reputation for beautiful weather in a sunny seaside setting, its growing population in the southernmost area of rain-starved California is a recipe for trouble in paradise. That challenge has spurred the creation of Pure Water San Diego — a multi-phase, multi-year program with the goal of using recycled water for up to one-third of San Diego’s water supply by the year 2035.

As the eighth largest city in the U.S., San Diego’s population of 1.4 million people has increased by 50 percent over the past three decades. With an average rainfall of less than 12 inches per year — and almost none of that falling between April and October — water is an extremely precious commodity. The Pure Water reuse program is just one facet of a larger sustainability effort that incorporates water conservation, recycled water, renewable energy, and more.

Phase 1 of the program, scheduled to break ground in Spring of 2019, is targeted to produce 30 MGD of purified water to be mixed with imported water stored in the city’s Miramar Reservoir and serve the northern areas of the city. The blended water from that reservoir will be treated at a drinking water plant before being introduced into the potable water distribution system (Figure 1). 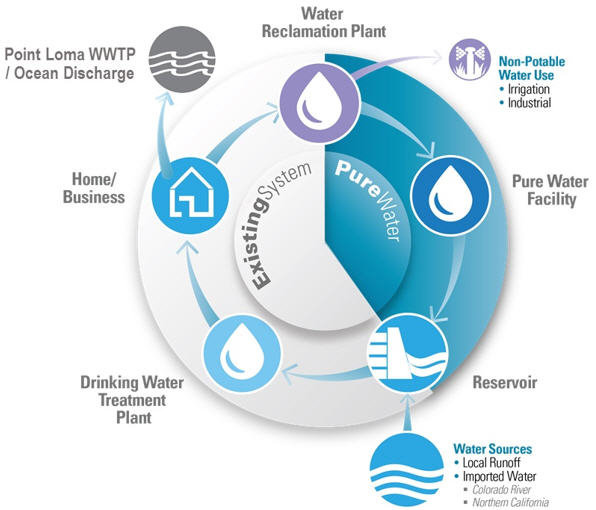 The program’s long-term goal is to produce 83 MGD of purified water to serve all areas of the city (Figure 2). That is forecast to be one-third of the city’s consumption by 2035. It is estimated that the current average San Diego resident uses approximately 65 gallons of water per day, which is only about 75 percent of the national average daily use of 88 gallons per person. 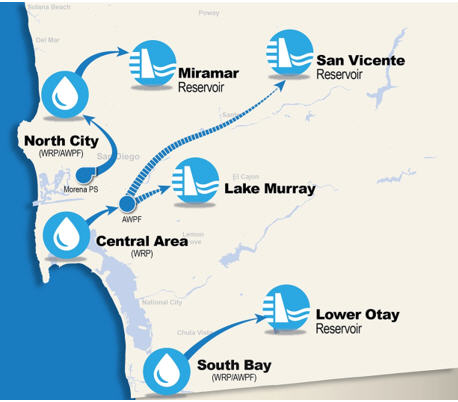 Figure 2. The ultimate goal of the Pure Water program for 2035 is to recycle up to 83 MGD of San Diego’s potable water by treating it and storing it in reservoirs spaced throughout the region.

Technology At The Heart Of The Effort

In preparation for rolling out the program, the city created a demonstration facility to prove that the total process could deliver water pure enough to meet all federal and state drinking water standards. It uses ozonation, biological activated carbon filtration, membrane filtration, reverse osmosis, and UV disinfection with advanced oxidation (Figure 3).

San Diego has taken significant steps to document the reliability of Pure Water technology. In a one-year period alone, more than 9,000 tests were conducted on 342 chemical and microbial components and water quality parameters. Since mid-2011, the city’s Pure Water demonstration facility has been supplying 1 MGD of purified water. In all, more than 50,000 water quality tests have been conducted to document the performance of the technology.

Investing In The Future

The estimated cost for current purification at the Pure Water demonstration facility is $1,700 to $1,900 per acre foot — i.e., 325,851 gallons. While that is higher than the current cost of imported water ($1,200 to $1,400 per acre foot), it is still less than one cent per gallon. Over time, that cost will become even more attractive considering projections that San Diego’s imported water rates are expected to double over the next decade. That is a continuation of the progression that has seen imported water costs triple over the past 15 years.

San Diego recently received a $614-million U.S. EPA loan, which the city will put toward the $1.4-billion Phase 1 budget for the program starting with the 2019 construction.

According to a news release on that loan, San Diego Mayor Kevin Faulconer was quoted as saying, “This federal funding is validation that our Pure Water Program is cutting-edge technology and a worthy investment for San Diego’s future water independence. This is going to be one of the most significant infrastructure projects in San Diego history and will deliver clean, reliable water to our residents for decades to come.”