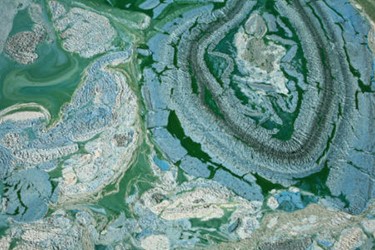 For years, harmful algal blooms (HABs) have posed a threat to drinking water across the country. And now, a tragic incident has illustrated that the problem can have an even more direct effect on our loved ones.

“A doggy play date in a North Carolina pond turned tragic after three pups died from toxic algae,” according to CNN. “The culprit … was poisoning from blue-green algae present in the pond where they played.”

HABs are on the radar of drinking water treatment facilities at this time of year, when warm temperatures encourage their growth. They have grown in frequency as nutrients from fertilizer and other sources increasingly find their way into waterbodies and risk contaminating drinking water. Salem, OR, has recently planned to invest $75 million to combat the problem. Advocates in Ohio voted to give Lake Erie legal rights to protect it from pollution leading to HABs. And the largest algal bloom in recorded history is currently approaching the Florida coast.

Despite the frequency of the issue around the country, many consumers aren’t aware of just how problematic HABs can be. It can be difficult to identify contaminated source water and even the most diligent regulators may not effectively communicate the location of blooms. In this recently reported incident, the dog’s owner, Melissa Martin, was not aware that her pets were at risk.

“Martin told CNN she didn’t notice the algae at first, but her veterinarian told her what appeared to be debris from flowers were blooms of cyanobacteria,” CNN reported. “She said she didn’t see any signs warning of toxic algae near the pond, which sits next to a popular walking trail. It’s her mission now, she says, to erect signs about toxic waters and warn pet owners about the blooms.”

Water quality advocates and pet owners alike are hopeful that more advocacy can make a positive difference in HAB education and prevention efforts. Martin’s loss has already served as a platform for more information about the dangers.

“Some blooms of blue-green algae can produce chemicals toxic to animals and people who drink the untreated water, according to the North Carolina Department of Health and Human Services (NCDHHS),” Fox News reported in a story about the tragedy. “The department added that the algae bloom may turn the water neon green, blue-green or reddish-brown, could cause a bad smell and taste in the water and sometimes forms foam or scum on the water’s surface.”

To read more about how utilities work to prevent the formation of HABs, visit Water Online’s Nutrient Removal Solutions Center.