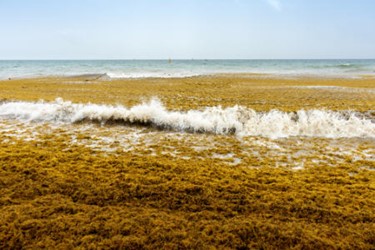 For those in the drinking water and wastewater treatment space, the climbing temperatures in summer months can bring with them an obstacle that seems to get worse every year — harmful algal blooms. Illustrating this aggravation is the presence of a massive bloom now approaching Florida that is reportedly the largest in world history.

Much of the toxic algae that plagues waterbodies around the U.S. can be traced back to an influx of nutrients like nitrogen and phosphorus, which need to be addressed by wastewater plants before effluent can be discharged. But warmer water and the presence of nutrients from other sources, like agricultural runoff, can make toxic algae difficult to control in source water. Drinking water treatment operations have to remain diligent, as the algae can make drinking water unsafe for consumption.

In this latest case of massive bloom, the algae in question is known as Sargassum, a seaweed that washes to shore and creates an unpleasant smell as it rots.

“Floating mats of Sargassum seaweed in the center of the North Atlantic were first reported by Christopher Columbus in the 15th century,” according to a research paper published this month in Science. “These mats, although abundant, have until recently been limited and discontinuous. However … since 2011, the mats have increased in density and aerial extent to generate a 8,850-kilometer-long belt that extends from West Africa to the Caribbean Sea and Gulf of Mexico.”

Though it is unlikely to cause dramatic issues for treatment plants, there is now so much of the seaweed in the Atlantic Ocean that it can be seen from space. One mat in particular, now dubbed the “Great Atlantic Sargassum Belt” (GASB) is the largest macroalgal bloom in the world — roughly twice the width of the United States at its peak. This behemoth is a stark illustration of how human activity may be making the harmful algal bloom problem worse.

“Researchers linked the GASB to human impacts — such as deforestation and fertilizer use in the Amazon, which has steadily increased nutrient runoff — as well as natural processes,” Vice reported. “When the macroalgae aggregates in coastal waters, it can deplete the oxygen levels, killing other life. When it dies, it sinks to the bottom and suffocates anything not fast enough to swim away. That, plus the rotten egg smell, sends tourists running and can disrupt local fisheries.”

So far, the GASB doesn’t seem to have had a direct impact on drinking water or wastewater operations. But there also seems to be no recourse in stopping it from becoming larger and potentially more disruptive. If nothing else, it should raise public awareness about the algal impacts our human activity can have.