Researcher: Produced Water Is 'Not As Bad As We Thought' 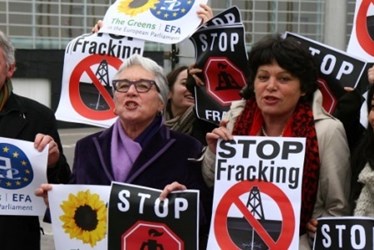 As study author Andrew Barron put it, the results indicate that frac water "was not quite as bad as we thought," Inside Climate News reported.

What was groundbreaking about the study was that it "involved examining and identifying over 50 organic chemicals in the waste—an area that's been little studied previously," InsideClimate News reported.

The researchers pinpointed 25 inorganic chemicals in the mixture.

"Of those, at least six were found at levels that would make the water unsafe to drink—barium, chromium, copper, mercury, arsenic and antimony. Depending on the chemical, consuming it at high levels can cause high blood pressure, skin damage, liver or kidney damage, stomach issues, or cancer," InsideClimate News reported.

The absence of benzene was a hopeful sign for the safety of the water supply.

Wilma Subra, an environmental consultant from Louisiana, told InsideClimate News that this discovery was "surprising."

The research has implications for the development of technology to treat and recycle produced mixture.

"Re-use of produced water for hydraulic fracturing is being encouraged; however, knowledge of the organic impurities is important in determining the method of treatment." the study said. The study indicated that "that industry should concentrate on non-chemical treatments of frac and produced waters."

Produced water is a hot button issue in many states as policymakers debate whether it poses too great a threat to the water supply and should be regulated.

For instance, in Texas, "the agency that regulates oil and gas activity is considering new, tougher regulations governing the practice of injecting leftover water used to frack natural gas wells deep into the ground — a process which is believed to be responsible for an increase in human-caused earthquakes across the state," Think Progress reported.