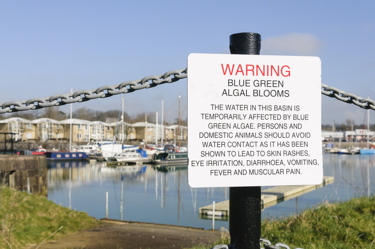 Ohio’s toxic algae problems are well documented. In 2014, high microcystin concentrations in drinking water caused by this algae led to a drinking water shutdown in Toledo. Last year, voters in the state moved to grant its most significant source-water body human rights in an effort to curb the issue.

Still, it might come as a surprise to learn that Ohio’s costs for fighting harmful algae over the last 10 years have been significantly higher than the costs of any other state in the country.

“Ohio far and away leads all states when it comes to spending money on the fight against harmful algae, with $815 million in documented expenses over the past decade — 70 percent of what all 50 states have spent,” The Toledo Blade reported.

The ranking came from a recent report from the Environmental Working Group (EWG), which found that Oregon spent the second most on fighting toxic algae, at $75 million, with Texas, California, and New York also in the top-five list of spenders.

In total, the EWG estimates that $1.1 billion has been spent fighting harmful algae across the U.S., which it called a likely undercount due to a lack of recorded data.

“Algae outbreaks can produce toxins that pose serious health hazards to people, pets and aquatic life,” EWG explained in its report. “Despite a huge surge in reported outbreaks in recent years, the federal government only tracks outbreaks in the largest lakes. Some states do a better job, but they do not always record the cost of dealing with the problem.”

For regulators in Ohio, the news seemed to indicate that the state’s approach to the problem so far hasn’t been working.

“The fact that Ohio spends more money fighting algae than anyone else, and yet the waters of western Lake Erie are as toxic as ever, proves that all the money in the world won’t solve this problem,” Toledo Mayor Wade Kapszukiewicz said, per the Blade. “Only meaningful regulations on agricultural runoff will make a difference.”

The state’s agriculture industry, at least, is optimistic that the program will help reduce Ohio’s costs on the issue going forward.

“The work being done in rural Ohio, paired with what is being done to address other causes of algal blooms in suburban and urban areas of the state, should give Ohioans peace of mind knowing that the issue is being addressed from all angles to insure health water for everyone,” Ty Higgins, a spokesperson from the Ohio Farm Bureau Federation, told the Blade.

It should also be noted that just because Ohio has been spending the most to combat toxic algae, it is not necessarily the state with the worst problem.