Nutrient Removal: Is Bardenpho Right For You?

The Bardenpho process is a popular choice for biological nutrient removal (BNR) of phosphorus and nitrogen, but it requires tankage that not all wastewater treatment facilities can accommodate. This case study details the process, the necessary plant parameters, and the performance of Bardenpho for nutrient removal.

The Fox River Water Reclamation District (FRWRD), located in Elgin, IL, was tasked with reducing effluent phosphorus concentrations from 2.5 milligrams per liter (mg/L) to 1.0 at its West Water Reclamation Facility (WRF), which is one of three plants the district operates. The 1.0 benchmark was set as part of a voluntary agreement with the Fox River Study Group and the Illinois Environmental Protection Agency (IEPA), but also in anticipation of state regulations.

“It's the writing on the wall, the floor, the ceiling, everywhere you look,” said FRWRD Executive Director Bob Trueblood. “We’re negotiating with the state now for the language that basically spells out the limit at 1.0, and that’s pretty much assumed for every discharger in the Fox River watershed.”

And it’s not just Illinois. Trueblood added that, on a national level, “Phosphorus limits are going to be part of everybody’s reality in the next few years. If it’s not now, it will be soon.”

Should the mandates arrive as expected, the West WRF will be well within compliance, thanks to the five-stage Bardenpho process started up in early 2012. The biological nutrient removal (BNR) system has reduced phosphorus levels down to 0.2 mg/L, while nitrogen — another problematic and closely monitored nutrient — has been reduced from 30 mg/L to 8.0.

Built in 2003, the West WRF was an ideal candidate for implementation of the five-stage (or “modified”) Bardenpho process, which requires the use of multiple tank zones operated in anaerobic, anoxic, and aerobic modes. The 5-MGD plant was designed with both plant expansion (up to 25 MGD) and BNR in mind, so the necessary tankage was already available to operate for nutrient removal at current capacity. 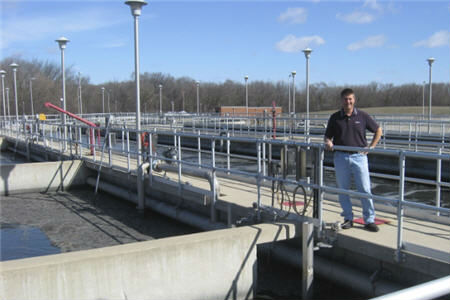 Furthermore, because the plant was still somewhat new at the time of the 2012 switchover, they were able to utilize their existing aeration blowers… with one important addition.

The West WRD purchased a high-speed blower through grant money of more than $90,000 — compliments of the Illinois Department of Commerce and Economic Opportunity and the Illinois Clean Energy Community Foundation — awarded on the basis of energy saved by adopting BNR.  With Bardenpho in place, the district was able to reduce the air demand by approximately 16%, in addition to the energy savings of the more efficient blower.

Beyond the plant’s natural design and the incentive of grant money, FRWRD management opted for the Bardenpho process because it works well in the cold weather of Northern Illinois and is a retained asset, as opposed to the continuous purchasing and repurchasing of chemicals for phosphorus removal.

“We never really liked the chemical option, because it's a one-time-use expense,” said Trueblood. “While you may actually lower your costs for this particular year, if you look at the 20-year life cycle, you've put a lot of money into chemical use, time after time, and you also have to dispose of it. Over the long term, when you have a retained-value asset like BNR, you have a much better opportunity to recover your costs.”

The modified, five-stage Bardenpho process is an expansion of the classic four-stage approach, with an anaerobic tank added on the front. The technical aspects of Bardenpho can be found in the U.S. EPA’s Municipal Nutrient Removal Technologies Reference Document, which includes the following diagram.

The five zones — anaerobic, anoxic, aerobic, anoxic, and aerobic — each require dedicated tank space, which is the critical component and cost of the Bardenpho process. Municipalities that experience high flows due to storm events and inflow and infiltration (I&I) require even further capacity.

In addition to tanks and aeration blowers, anoxic mixers are necessary for the zones that aren’t aerated, and a recycle pump is needed to return the mixed liquor back to the front of the cycle for denitrification, as shown in the diagram above.

The importance of the recycle pump, and of backup equipment, was impressed upon the FRWRD staff in March of 2013, when a faulty wire shut the pump down and sent effluent nitrogen levels up to 18 mg/L. With no nitrogen mandate in place, the experience merely served as a valuable lesson for when regulations could be in play. “With that knowledge now, we will make sure that we have additional equipment available,” Trueblood vowed. “So if this occurs in the future, we can take temporary measures to continue to denitrify and to meet the demands.”

Mostly, however, the Bardenpho process is easy to operate and maintain. FRWRD does it with just two full-time operators — in addition to shared maintenance personnel — but they also get help from their supervisory control and data acquisition system (SCADA).

“If you’re going to do Bardenpho, or any type of advanced system, I think you really need to make sure that you have a good SCADA system there,” advised Trueblood, “particularly if you aren't staffed 24 hours a day. If you have an alarm condition, can you dial in with a laptop and take care of it? I think SCADA is fairly critical for any type of process like this.”

Because the plant was designed for BNR, the capital cost for putting the Bardenpho process in place was a relatively modest $213,000, which included the 150-horsepower high-speed blower, tank mixers, and some engineering design costs.  With the grant funding, the net cost to the district was approximately $123,000.

“The biggest capital cost for any facility to implement BNR would be the tankage, if you don’t have enough.  If the volume is there, just figuring out your aeration system and dividing the tankage up into zones are minor costs,” said Jack Russell, FRWRD’s lab manager.

As for FRWRD, they expect to see ROI at the West WRF in less than 12 years. The initial ROI estimate was 7 years, extended only because of energy market deregulation and a drop in electricity rates (lower cost = less savings margin). Energy use, however, has been reduced as anticipated. Based on actual power data from October 2012, the estimated power reduction for aeration is over 380,000 kilowatt hours (kWh) per year, or 35%.  This comes from needing 16% less air with the Bardenpho process, delivering the air with a more efficient blower, and having a larger turndown range with the new blower.  Even considering the energy to run the added mixers and internal recycle pump, the power savings are over 15%.

“By going to the high-speed blower, it gave us a better range to work with, and we’re able to better target the actual air demand that we have, versus the conventional blower,” Trueblood explained. “We could have made the BNR work without it, but it works so much better with the high-speed blower.”

Along with the financial benefits offered through efficiency, the Bardenpho process, when compared to the chemical alternative, also works better for the environment. “If you’re able to reduce your energy demands, then you’re able to reduce your carbon footprint. With chemical nutrient removal, you’re actually adding to the carbon footprint — and the cost — by transporting the chemical to the facility. The chemical addition also results in more biosolids to process and dispose of.”

Is Bardenpho Right For Your Plant?

Wastewater treatment plants with extra tankage or add-on space should strongly consider Bardenpho for nutrient removal, and also look into grants offered for energy-efficient technology. For FRWRD, Bardenpho proved to be a logical and highly effective choice. It should be noted, however, that the facility pumps its sludge to another plant rather than processing it on-site; therefore, 0.2 mg/L may not be achievable when incorporating sludge dewatering recycle streams. In such cases, municipalities with very strict phosphorus limits (below 0.5) may need to supplement Bardenpho with (minimal) chemical treatment and/or filters.

Facilities absent the design and equipment advantages of the West WRF would likely have significantly higher capital costs associated with a transition to Bardenpho. Many others, because of space restrictions, simply don’t have the option. Those facilities may opt for chemical treatment, which is cheaper up front, but has the aforementioned drawbacks (recurring costs, not environmentally friendly); membrane bioreactor (MBR) technology, which may incur significant capital costs, but has a much smaller footprint than BNR; or waste lagoons, which take up expanses of space and have come under tighter EPA regulation due to adverse environmental and health impacts.

While the Bardenpho process represents a step away from the use of harsh and (over time) expensive chemicals, it’s a step that has a large physical footprint. As such, it presents an engineering challenge that must be weighed against life-cycle cost, as well as other available nutrient-removal processes.

What experience do you have with the Bardenpho process? Please post your comments or questions below…