Nitrate contamination is a pervasive problem in many industrial and municipal discharges, both in the U.S. and worldwide. Excess nitrates from large-scale use of agricultural fertilizers, concentrated animal feeding operations and releases of partially treated sewage disperse into groundwater supplies and have become one of the world’s most prevalent contaminants (Water Online, 2011). In the U.S., it is estimated that over 10,000 public water supply wells currently have high levels of nitrate. Studies across Western Europe and Asia have further identified thousands of wells with nitrate concentrations at or above established health standards, with potential impacts to as many as 10 million people.

The typical drinking water standard to meet is 10 mg/L of nitrate as nitrogen, primarily due to concerns with methemoglobinemia (“blue baby syndrome”) in infants. Nitrate discharges continue to be strictly regulated and a number of new technologies, aimed at wastewater, drinking and industrial waters, have come to the forefront.  Most of these new technologies are biologically based.

Biological nitrate removal is based on the following reaction that is catalyzed by denitrifying bacteria:

Methanol is one of many carbon sources that can be used to promote denitrification.  Others include ethanol and other alcohols, sugars such as glucose and sucrose, glycerin and acetate.

Conventional technologies for nitrate removal include:

The TETRA Denite® system, which is a fixed-film biological denitrification process combined with a deep-bed filtration system, was developed by Severn Trent as another type of packed bed bioreactor.Its objective is to provide effective total nitrogen and phosphorus removal.Methanol is typically added as the carbon source via the TETRAPace™ automatic dosing control system to reduce chemical costs and minimize Biochemical oxygen demand (BOD) in treated effluent.TETRA Denite has been shown to provide effective denitrification (to below 0.5 mg/L nitrate-N) during cold weather operation (6-12o C).

2. Membrane bioreactors (MBRs).  An MBR is a membrane process such as microfiltration or ultrafiltration combined with a suspended growth bioreactor. When used on domestic wastewater, MBRs can produce high-quality effluent for discharge or reclaim for urban irrigation.  Other advantages of MBRs over conventional processes like packed bed bioreactors include a small footprint and easy retrofit to existing wastewater treatment plants.  MBR providers include GE Water, Evoqua Water Technologies, and Bioprocess H2O.

3. In situ systems.  This technology is typically applied where groundwater must be treated and it cannot be easily extracted or re-injected. Several in situ systems implemented by Apex Engineering are shown in Table 2.

New technologies for nitrate removal include:

1. Moving bed bioreactors (MBBR). This biological wastewater treatment process utilizes specialized plastic carriers to create a surface for biofilm attachment.  The carriers are mixed in the reactor and their large surface area reduces the reactor volume required for treatment.  One MBBR provider is AnoxKaldnes, a subsidiary of Veolia.  Apex Engineering has worked with an AnoxKaldnes system at the Stillwater East Boulder Mine in Alaska and a proposed system for the Kensington Mine in Alaska.  An MBBR from Headworks BIO™ Inc. is also being used at a gold mine in northern Saskatchewan.  The technology is provided by other companies at many locations with diverse applications.

2. The ARoNite (Autotrophic Reduction of Nitrate) system developed by APT Water.  This is a fixed-film biological treatment technology for removal of oxidized contaminants such as nitrate, perchlorate, hexavalent chromium and selenate. Like other biological systems, ARoNite does not create a brine stream or other waste residual.  ARoNite systems rely on native bacteria that use added hydrogen gas as an electron donor, and utilize carbon needed for cell synthesis from bicarbonate in the feed water or from added carbon dioxide.  Advantages listed for this process are:

3. The SepticNET™ system developed by Water & Environmental Technologies (Butte, MT), which is a modular septic treatment system designed for use with new home construction, as an upgrade to existing on-site septic systems or as a complete small community wastewater treatment system (Figure 1).  SepticNET was patented in 2012 and has gained Montana Department of Environmental Quality approval as a Level 2 wastewater treatment system.  It is approved for an effluent total nitrogen concentration of less than 7.5 mg/L with no limitations on flow rates and no nitrate mixing zones.  SepticNET is available in pre-designed residential and small community systems ranging from 500 gallons per day (gpd) to 10,000 gpd.  The system has four treatment steps: 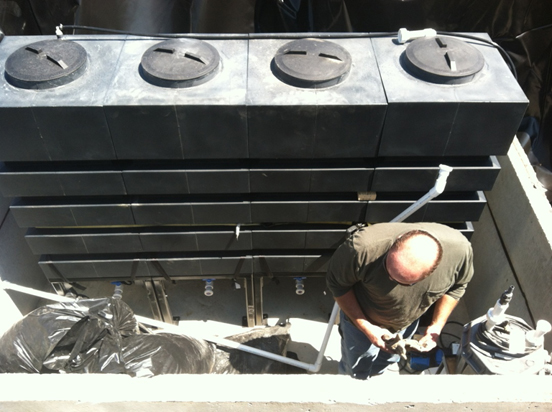 4. Floating islands or floating treatment wetlands (FTWs).  Over 5,000 FTWs have been installed worldwide over the past decade by Floating Island International (FII) and its licensees (see a 9/15/04 article in Water Online). Uses include water treatment, fish and wildlife habitat enhancement, and shoreline protection.  FII applications for nitrate removal include wastewater lagoons and stormwater ponds (Figure 2), with up to 95 percent removal.  Apex Engineering is a consultant for FII.

5. Lentikats MBBR.  In the past five years, this company from the Czech Republic has advanced a biotechnology that immobilizes pure cultures of bacteria (commonly present in activated sludge) into porous polyvinyl alcohol pellets, called a biocatalyst.  Wastewater diffuses through the sponge-like pellets while the entrapped bacteria biodegrade contaminants such as nitrate.  Lentikats has developed a specialized biocatalyst for denitrification. Reported advantages include:

The technology has been evaluated in about 15 pilot tests and three full-scale installations.Lentikats claims its biocatalyst pellets can be continuously operated for at least ten years without replacement or decreases in efficiency.

Ion exchange (IX) is another technology for nitrate removal.  Most IX resin manufacturers make ion-specific resins for contaminants such as nitrate, which minimize adsorption of and interference from other cations or anions. The Buckhorn Mountain Mine in Washington used a nitrate-specific resin from ResinTech to treat a 100-gpm stream of mine water.  The primary disadvantage of IX is that it produces a concentrated brine that must be discharged, disposed of or further treated.  However, the brine volume is typically lower than that from reverse osmosis.

AdEdge Water Technologies has installed dozens of IX systems for many contaminants, primarily arsenic.  AdEdge has recently installed several IX systems for nitrate removal from drinking water and industrial water in the U.S.  Design flows range from 40 to 350 gpm, with nitrate-nitrogen concentrations between 12 and 25 mg/L.  Other companies have also used IX on both wastewater and drinking water.  However, I know of several facilities that have switched from IX to biological treatment.

Reverse osmosis (RO) can also be used to remove nitrate from water.  RO is a non-selective technology in that it will remove all ionic contaminants from water, particularly those with higher valences.  Since NO3- is a monovalent ion, RO rejection is lower than for most other contaminants.  Because of this and the higher brine volume than either IX or biological treatment, RO is rarely used for nitrate removal.  Other membrane processes such as microfiltration or ultrafiltration are ineffective for nitrate removal except when employed as part of an MBR.