This article is the sixth in a series on industrial water treatment focusing on inorganic contaminants; this one will discuss several emerging treatment technologies.  While regulatory limits are being established (see Part 1), the process of identifying a cost-effective treatment process should be undertaken (Part 2).  Potential water treatment processes for inorganic contaminants can be grouped into three categories:  physical (Part 3), chemical (Part 4), and biological (Part 5).

This article will review:

Biochemical reactors (BCRs) are a type of suspended-growth bioreactors.  These engineered treatment systems use an organic substrate to drive microbial and chemical reactions to reduce acidity and concentrations of metals and sulfate in industrial waters (Interstate Technology & Regulatory Council, 2013, Biochemical Reactors for Mining-Influenced Waste), primarily mining-influenced water (MIW).  BCRs can be designed to address a wide range of flows, acidity, and metals loading, and can also be designed to operate via gravity flow or pumped flow.  They can be configured to operate without external energy or chemicals, and can often operate for months at a time without human intervention.  BCRs were formerly known as “passive bioreactors.”

The most common BCRs for treating MIW operate anaerobically and are also called sulfate-reducing bioreactors (SBRs).  Microbial sulfate reduction produces sulfide and bicarbonate within the reactor, which precipitates metals such as iron, cadmium, copper, nickel, lead, and zinc in MIW as metal sulfides at pH values above 5.  BCRs contain a mixed consortium of bacteria, leading to microbial processes including organics degradation, fermentation, denitrification, and sulfate reduction.  The general formula for sulfate reduction is:

This reaction transforms sulfate to sulfide, which will precipitate dissolved metals as metal sulfides.  It requires an organic carbon source for metabolism and consumes acidity, which raises the pH.

BCRs have been evaluated for over 20 years, primarily for MIW.  Their design life is 20 to 30 years with minimal operation and maintenance requirements.  Ideal carbon sources are a mixture of long-term sources (including wood chips, sawdust, and biochar) and short-term sources (straw, hay, and manure).  Limestone can also be added as a pH buffer.  Table 1 shows a partial list of BCRs installed over the past 20 years. 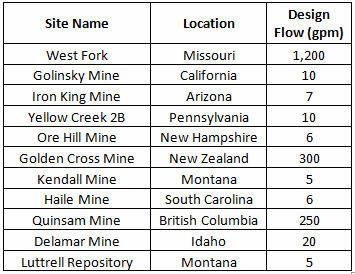 Apex Engineering, Sovereign Consulting and Morrison-Maierle have designed three large BCRs that are now being installed and commissioned at the Jerritt Canyon Mine in northern Nevada.  Design flows range from 5 to 30 gpm, with sulfate concentrations of 2,500 to 8,000 mg/L. 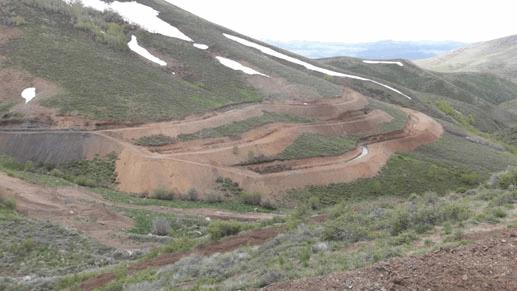 Figure 1.  Snow Canyon BCR under construction at the Jerritt Canyon Mine

The Solar Transpired Evaporation System (STES) has been developed by the Solar Multiple company as an accelerated evaporator for difficult-to-treat waters.  The technology, which is still in the pilot-scale stage, increases evaporation rates by about seven times compared to standard solar evaporation.  The technology uses south-facing solar arrays to heat air, which is then bubbled through the water to be evaporated.  Water vapor escapes to the atmosphere while solids accumulate in a pond or tank. 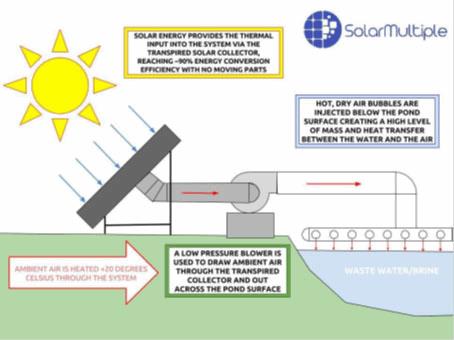 Figure 2.  Schematic of the STES system

Advantages of STES include:

The primary disadvantage is that water is not recovered.  Typical costs for this technology are shown in Table 2.

1. Moving bed bioreactors (MBBR). This biological wastewater treatment process utilizes specialized plastic carriers to create a surface for biofilm attachment. The carriers are mixed in the reactor and their large surface area reduces the reactor volume required for treatment. One MBBR provider is AnoxKaldnes, a subsidiary of Veolia. Apex Engineering has worked with an AnoxKaldnes system at the Stillwater East Boulder Mine in Alaska and a proposed system for the Kensington Mine in Alaska. An MBBR from Headworks BIO™ Inc. is also being used at a gold mine in northern Saskatchewan. The technology is provided by other companies at many locations with diverse applications.

2. The ARoNite (Autotrophic Reduction of Nitrate) system developed by APT Water. This is a fixed-film biological treatment technology for removal of oxidized contaminants such as nitrate, perchlorate, hexavalent chromium, and selenate. Like other biological systems, ARoNite does not create a brine stream or other waste residual. ARoNite systems rely on native bacteria that use added hydrogen gas as an electron donor, and utilize carbon needed for cell synthesis from bicarbonate in the feed water or from added carbon dioxide. Advantages claimed for this process are:

3. The SepticNET™ system developed by Water & Environmental Technologies (Butte, MT), which is a modular septic treatment system designed for use with new home construction, as an upgrade to existing on-site septic systems or as a complete small community wastewater treatment system (Figure 3). SepticNET was patented in 2012 and has gained Montana Department of Environmental Quality approval as a Level 2 wastewater treatment system. It is approved for an effluent total nitrogen concentration of less than 7.5 mg/L with no limitations on flow rates and no nitrate mixing zones. SepticNET is available in pre-designed residential and small community systems ranging from 500 gallons per day (gpd) to 10,000 gpd.The system has four treatment steps: 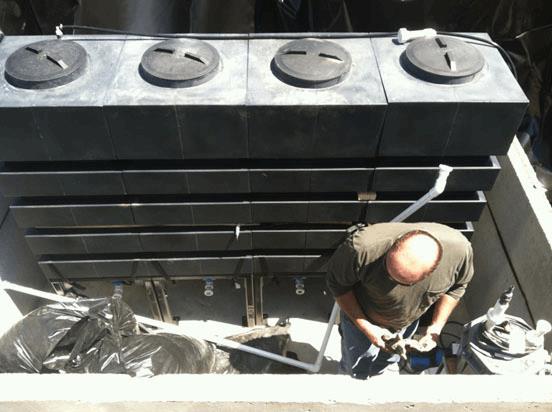 4. Floating islands or floating treatment wetlands (FTWs).Over 6,000 FTWs have been installed worldwide over the past decade by Floating Island International (FII) and its licensees (Water Online, 9/15/14). Uses include water treatment, fish and wildlife habitat enhancement, and shoreline protection. FII applications for nitrate removal include wastewater lagoons and stormwater ponds (Figure 3), with up to 95 percent removal. Apex Engineering is a consultant for FII. 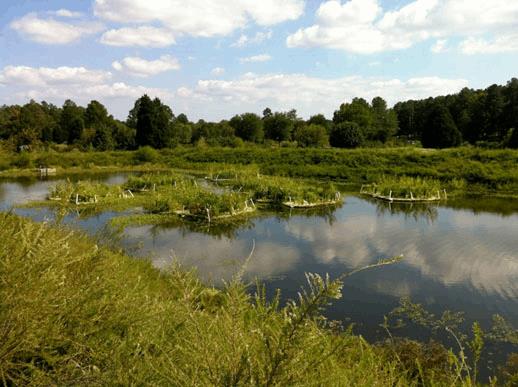 5. Lentikats MBBR.In the past five years, this company from the Czech Republic has advanced a biotechnology that immobilizes pure cultures of bacteria (commonly present in activated sludge) into porous polyvinyl alcohol pellets, called a biocatalyst. Wastewater diffuses through the sponge-like pellets while the entrapped bacteria biodegrade contaminants such as nitrate. Lentikats has developed a specialized biocatalyst for denitrification. Reported advantages include:

The technology has been evaluated in about 15 pilot tests and three full-scale installations.Lentikats claims its biocatalyst pellets can be continuously operated for at least 10 years without replacement or decreases in efficiency. The company also has experience with nitrification of very high ammonia concentrations and with deammonification.

Several innovative arsenic removal technologies, or variations of existing technologies, have been developed over the past decade (Water Online, March 2015).  Most are aimed at providing simple, low-cost arsenic removal to developing countries such as Bangladesh and India, where naturally occurring arsenic is common in groundwater.  It is estimated that over 60 million people in those two countries drink groundwater contaminated with high levels of naturally occurring arsenic.

1. ElectroChemical Arsenic Remediation (ECAR) uses a low electrical current to create rust from iron plates in contaminated water. The rust binds to arsenic, which can then be removed from the water through settling and/or filtration. It is targeted for communities or countries that do not have the resources for standard coagulation/filtration plants. The technology was developed at Lawrence Berkeley National Labs and is currently being pilot-tested by a company called SimpleWater. The ECAR process is reportedly much less expensive than conventional technologies.

2. Regenerating adsorptive media (AM) is another recent development. Several types of AM media have been used for arsenic removal for decades. Although alumina, titanium, and zirconium-based media cannot yet be regenerated, iron-based media can. Backwashing and regenerating iron-based media, rather than replacing it, is a development being evaluated at the Twentynine Palms Water District in California (Water Online, 2014). A caustic soda solution (pH 13) is used to strip arsenic off the media.

At Twentynine Palms, regenerated media has shown no signs of degradation after five years of regenerating. Each regeneration removes about 90 percent of the arsenic accumulated on the media. Operator training (a more complicated process plus safety training) and wastewater disposal are the major considerations for regenerating iron-based AM. Including wastewater disposal, the entire media regeneration process is still 60 percent less expensive than purchasing new media.

3. Several nanomaterials have recently been developed for arsenic removal. In one technology developed by the National Institute for Materials Science, the inner walls of nanoporous substances are densely packed with a functional group that is sensitive to and selective for adsorbing arsenic (Water Online, 2012). Very low levels of arsenic can reportedly be adsorbed. A distinctive feature of the technology is that the color of the nanomaterial changes as arsenic is adsorbed. This nanomaterial is reportedly lightweight with rapid kinetics but also low-cost. Application at both large-scale treatment plants and point-of-use systems is being explored.

4. Another low-cost technology designed to address arsenic removal in developing countries is Subterranean Arsenic Removal (SAR). This technology uses controlled oxidation with air and filtration to reduce arsenic to low levels. In a modified in situ process, water is oxidized above-ground and injected back into the aquifer, where ferric arsenate particles are then filtered. No chemicals or adsorption media are used, and the sludge produced is immobilized underground. The SAR process is being used at several plants in India and one community in Washington State. Here is a schematic of the SAR process: 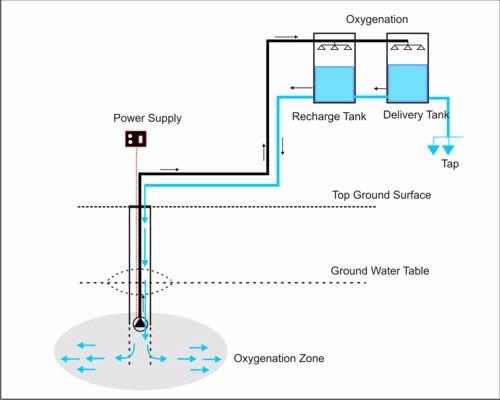