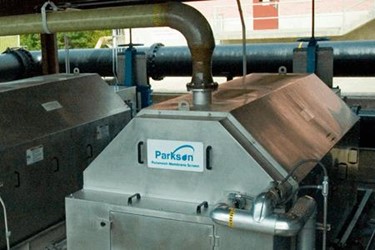 Rotating drum screens with perforated plate screen media are the most successful solution for screening prior to an MBR system. Because Rotoshear® PF uses Rotoshear®’s base structure, it is the most reliable and highest capacity screen for an MBR plant.

More than 15 MBR plants use Rotoshear® PF as their membrane protection. It has been incorporated at more than five major installations in the country with more than 5 MGD (3500 gpm) flow rate per screen. That is a claim no one else can make.

Unlike center-flow band screen technologies, Rotoshear® PF does not allow bypass of solids larger than the screen opening. Plants using other technologies often face problems with membranes fouling. As a result of those problems, several plants switched to Rotoshear® PF to eliminate their concerns about membrane fouling.