How The Ukiah Wastewater Treatment Plant Solved Its Debris Problem

Welcome to the City of Ukiah, CA
The City of Ukiah is a modest community of about 16,000 people set in the heart of Mendocino County. Conveniently located along the historical Highway 101, Ukiah’s location makes it an accessible cultural and financial hub not only to Mendocino County but to neighboring Lake County as well. With its picturesque vineyards, quaint historical downtown, and 300 days of sunshine, Ukiah prides itself in earning the title of “California’s Best Small Town.”

Wastewater Facility
The water treatment needs of both Ukiah Valley and Lake County are served by the Ukiah Wastewater Treatment Plant. Nestled between Highway 101 on the west and the Russian River to the east, the facility features a scenic view of surrounding valleys of vineyards seemingly out of a Steinbeck novel. Construction of the facility was completed in 1958 back when the city had a population of around 9,000. Since then, the population has grown by about 78% to a total of 16,000 residents. The plant’s five pumps are equipped to handle 2.8 MGD (million gallons per day) of dry weather flow, and 20 MGD of wet weather flow. Even though the plant is equipped to remove some floating material, they were having issues with an overflow of unwanted debris.

The Challenge of Unwanted Debris
As the sole treatment facility responsible for the intake of 1,333 square miles and a growing population, the problem of solid non-organic waste became an issue. Plant Supervisor Alan Hodge notes that “the plant is designed to treat human waste, but that’s not all we take in. If it can get flushed down a toilet or sent into a manhole or a drain—we get it. Gravel, rocks, toys, potato chip bags, garbage, you name it.” But the problem doesn’t stop there. They also occasionally find cell phones as well as service garments from a local prison. Alan reveals that when faced with this obstacle they only had two solutions—manual removal, or pump replacement.

Manual removal means sending in an operator to clear the debris by hand. This is not only time- consuming but dangerous as well. Climbing down a well surrounded by pipes and moving water can be a potentially life-threatening situation. The alternative is to replace the whole pump once it’s received extensive damage from clogging. Although it’s safer than manual removal, it’s very costly. Alan notes that “with the pumps taking in so much trash they would invariably fail at least once a year. [They] would fail and cause us to have to rebuild each one of those pumps literally once a year at the tune of about $100,000 a piece. So right there is a half million dollars to rebuild five pumps almost every single year.” 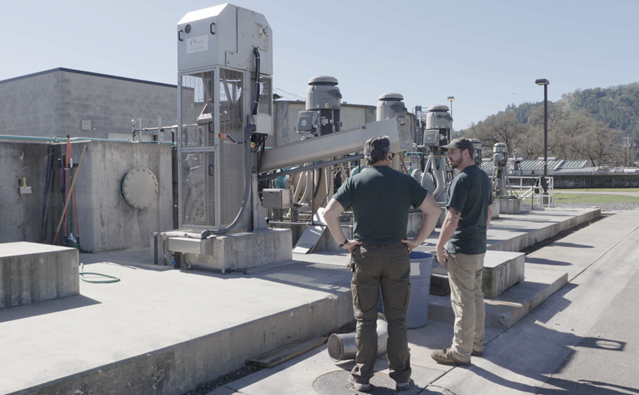 Having recently undergone a three year, $56.5 million improvement project, spending half a million dollars every year just on pump replacement was not an option. Thankfully, Alan Hodge contacted Aqualitec for a solution to their debris problem.

The Aqualitec Solution
The solution was Aqualitec’s Screentec bar screen: a vertical bar screen filter system designed to remove any solid objects from wastewater, and protect pumps from clogging. Aqualitec’s proprietary bar screen is vertically designed to fit headworks, pump stations, lift stations, wet wells, and manholes. A stainless steel rake collects unwanted debris at the bottom of the frame, which can then be ejected upwards and prepared for disposal. This product proved to be a great solution for Alan Hodge. He says that “once the Aqualitec bar screen was installed, we haven’t had to rebuild any of the pumps.” The Screentec Aqualitec becomes the first level of filtration used by wastewater treatment plants, and extends pumps’ life cycle while also improving the quality of wastewater treatment. And with no moving parts at the bottom of the frame, it can safely be operated from the top.

Aqualitec Screentec: The Affordable, Quality Solution
Screentec’s versatile design meant that it could easily be installed in Alan’s plant with minimal retrofitting needed. It also spared the danger of manual maintenance, while at the same time protecting expensive equipment. “The only manufacturer that provided a bar screen that could be installed and accommodate this plant design was Aqualitec. I’m very happy that we have this bar screen,” Hodge says. “That money is now allocated to training and maintenance issues with other equipment throughout.

The Screentec design proved to be a great investment. By getting rid of their clogging issues, the Ukiah Wastewater Treatment Plant was able to save over half a million dollars every year. Aqualitec’s solution meets the needs for reduced manual labor, lessened risk to operators, equipment reliability, and increased protection of expensive pumps. With over 15 years of experience in the industry, we guarantee to always be the most affordable, quality solution.

Hodge says “I’m very happy that we have this bar screen. I’ve been doing water treatment and wastewater treatment for about 37 years now my ultimate goal for when I retire is that I leave the city of Ukiah with a competent group of individuals.” Thanks to Aqualitec, that goal is possible.