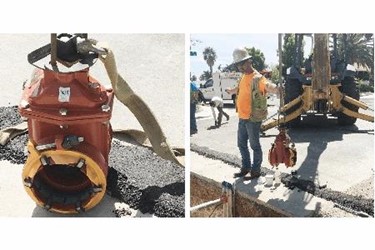 Las Vegas Valley Water District (LVVWD), which serves more than one million customers in southern Nevada, completed its first pilot installation of the AMERICAN Flow Control Series 2500 Resilient Wedge Gate Valve with ALPHA restrained joint ends in April 2017. LVVWD Engineer Kenya Henderson said, “We were impressed with how quick and easy it was to install the gate valve with ALPHA ends.”

Byrd Underground served as contractor for the project, which was part of the water district’s ongoing system maintenance. “After installing the initial valve with ALPHA ends for this pilot project, we really saw the value in this valve design,” said Tyler Byrd with Byrd Underground. “We requested approval to use ALPHA on another project where we needed to shut down a water main, which provided both fire and domestic services, in order to cut in two new gate valves for isolation purposes. By using ALPHA, we estimated we could reduce shutdown time from four hours to 45 minutes, minimizing the impact to the end user.”

AMERICAN introduced the ALPHA restrained joint for use on its Series 2500 4- to 12-inch Resilient Wedge Gate Valves and its American-Darling and Waterous fire hydrants last year. Developed by Romac Industries, Inc., the ALPHA joint restraint can quickly be installed by one person, is compatible with several pipe materials and uses only one stainless steel bolt, versus up to eight bolts on each end of a standard mechanical joint valve. ALPHA saves the customer time and money. A video featuring the installation of an AMERICAN Flow Control Series 2500 with ALPHA retrained joint ends, as well as technical information, is available on AMERICAN’s website.

About AMERICAN
Founded in 1905 in Birmingham, Ala., AMERICAN is a manufacturer of fire hydrants, valves and ductile iron pipe for the waterworks industry and electric-resistance steel pipe for the oil and natural gas industries. AMERICAN’S diversified product line also includes spiral-welded steel pipe and fire pumps.

For more than a century, AMERICAN has been committed to doing things the right way – exceeding customer expectations, caring for our employees and building strong communities.