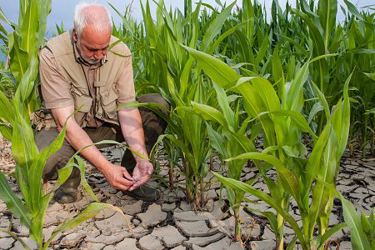 As the heart of a historically severe drought in the U.S., California is forcing its emblematic agricultural industry to adapt.

“Responding to California’s extreme drought, state water regulators have ordered many farmers, agricultural water districts and cities to stop diverting water from rivers and streams along the San Joaquin River,” the Los Angeles Times reported. “Large quantities of water are typically diverted to supply vast farmlands growing almonds, pistachios, grapes, alfalfa for cattle and other crops. Water deliveries for agriculture have already been cut back substantially during the drought, forcing growers to leave some lands dry or pump more groundwater, which has been rapidly declining in many areas.”

California’s latest drought has seen its cities pursue ambitious new water management plans and a range of forced consumption cutbacks. But even these solutions don’t appear sufficient to curb a trend that is harshly impacting nearly all of the Southwestern United States.

Now, with more cutback measures reaching California’s massive farming sector, some fear this drought’s consequences will soon be felt more widely than ever.

“The latest curtailments will have major effects in farming areas, said Danny Merkley, director of water resources for the California Farm Bureau,” per the Times. “Merkley said he hopes the cuts don’t lead to food shortages or significant hikes in food prices, ‘because I really do not want to rely on China or Mexico or South America for my food supply.’”

On top of the growing cutbacks, California is exploring a range of additional solutions to secure and protect its dwindling water supplies. One additional, agriculture-specific idea has been to buy its farmers out.

“After decades of fighting farmers in court over how much water they can take out of California’s rivers and streams, some state lawmakers want to try something different: use taxpayer money to buy out farmers,” the Associated Press reported. “A proposal in the state Senate would spend up to $1.5 billion to buy ‘senior water rights’ that allow farmers to take as much water as needed from the state’s rivers and streams to grow their crops.”

As California explores ways to secure drinking water supplies, it’s clear that the impact on the state’s farmers will be significant. Just how that impact is felt across the rest of the country is yet to be seen.