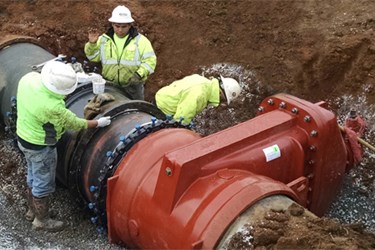 Murfreesboro, Tennessee, is the fastest growing city in Tennessee, and one of the fastest growing cities in the United States with its population more than doubling since 2000. To manage this growth, the city’s Water and Sewer Board recently embarked on an $8.2 million project to construct the Southwest Regional Force Main. It is one of three projects being constructed simultaneously by the city to increase capacity and meet demand. The other two projects involve construction of the 20-million gallon per day (MGD) Southwest Regional Pumping Station and a new headworks or preliminary treatment building at the Sinking Creek Wastewater Treatment Plant. Once finished in summer 2015, the three projects will make the system complete.