In order to maintain system design efficiencies and provide protection from transients, water pipelines and distribution systems require the installation of air valves at high points and regular intervals (i.e., every half-mile) to exhaust and admit air during system operations including filling, draining, and critical conditions such as surges or line breaks. The risk of contamination cannot be mitigated by eliminating the valves. The function of air valves is critical to the safe and efficient operation of the water system.

Air valves are produced in accordance with the AWWA Standard C512 and should be certified for use in drinking water systems in accordance with NSF/ANSI 61. AWWA also publishes M51 — Air Valves: Air Release, Air/Vacuum, And Combination Air Valves to provide guidelines for the use and installation of air valves including the design rule that air valves should be installed as close to the pipe as possible. AWWA advises that long interconnecting piping to the air valve should be avoided when possible and the piping shall be larger than the valve to accommodate the required flow of air, hence most water pipelines have many planned openings for air release and air entry that can also allow the entry of contaminated water or harmful chemicals. Figure 1 shows a flooded valve vault and the same vault shortly thereafter where contaminated water was drawn into the pipeline due to a negative pressure transient in the pipeline. 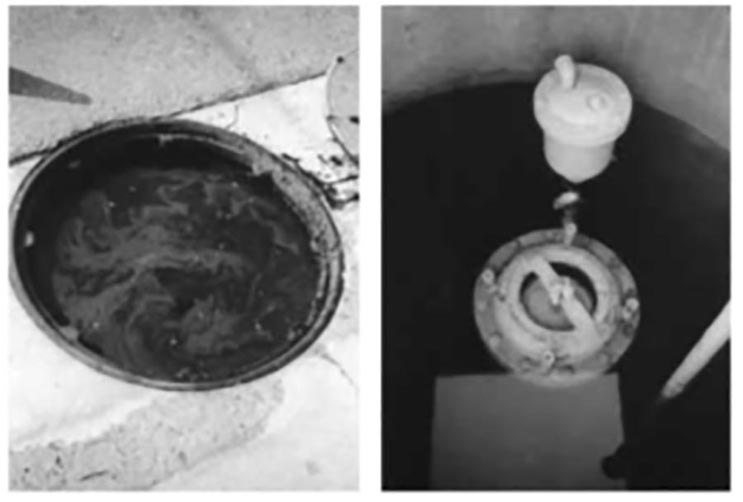 In colder climates and urban areas, water pipelines are typically buried and the air valves are installed in valve vaults below ground level. If the vault becomes flooded and a vacuum occurs in the pipeline due to a power outage or negative pressure transient, the contaminated floodwater will be pulled into the water pipeline through the air valve. Valve vaults are rarely monitored, and the contamination may go totally undetected.

Some waterworks regulations require the outlet of the air valve to be connected to a vent pipe that extends above grade and above the expected flood level. Unfortunately, this type of vent pipe subjects the air valve and pipeline to freezing temperatures and external malicious tampering. Vent pipes inadvertently provide a vulnerable direct connection between public areas and the buried potable water line setting up a potential threat. A hazardous substance or toxin can be intentionally introduced into the vent pipe, and when the air valve admits air, the contaminant will be drawn directly into the water pipeline. Finally, many water pipelines run under streets or in dense urban areas where such risers cannot be conveniently located adjacent to the pipeline.

The Inflow Preventer was developed as a solution that would avoid the use of air valve vent pipes, enhance the security of drinking water systems, and properly protect the system from contaminated floodwater and malicious sabotage. An Inflow Preventer, as shown in Figure 2, is a mechanical device mounted on the outlet of an air valve or vent pipe to allow normal flow of air in and out of the water system and prevent inflow of contaminated water into a water system as a result of flooding or malicious tampering. When floodwater enters the bottom of the device, it raises the floats, which in turn seal tightly against sensitive resilient seats with integral O‐ring type sealing surfaces. The device has redundant sealing chambers for added reliability. Even with the vault flooded and the device closed, the air valve and device can still release air from the pipeline to maintain pipeline efficiency. However, when a vacuum occurs in the pipeline, floodwater will not be allowed to enter the pipeline, so the vacuum protection feature of the air valve will be temporarily lost. If vacuum protection is critical to the structural integrity of the pipe, then an alternate scheme such as a closed surge tank should be considered. 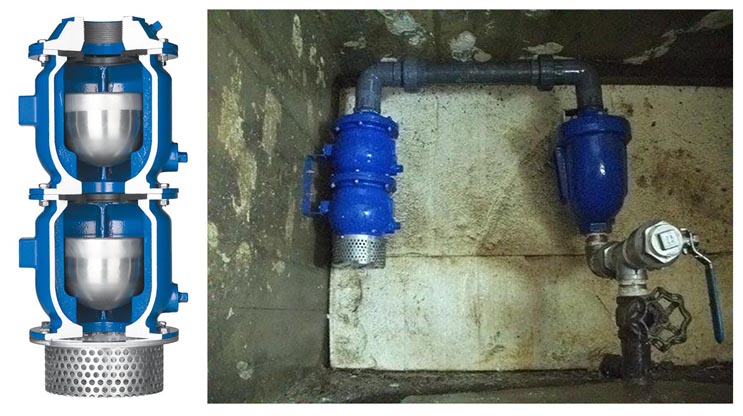 The standard AWWA C514 — Air Valve and Vent Inflow Preventer Assemblies for Potable Water Distribution Systems and Storage Facilities was published in 2015 for the water distribution industry. The Inflow Preventer was also included in AWWA M51, referenced above, as a possible solution for flooded air valve vaults.

According to AWWA M51 practices, a valve vault can be equipped with an Inflow Preventer per AWWA C514 to prevent contamination from flooding as shown in Figure 3. The vent pipe provides for regular air flow but is equipped with dampers to prevent the convection of cold air. When required by the water system, the dampers open fully to allow airflow in both directions. If the vault is subject to flooding, then the inflow preventer can be installed on the valve outlet as shown. The Inflow Preventer is normally open and allows normal air flow in and out of the water system and prevents the inflow of contaminated water into a drinking water system as a result of flooding. 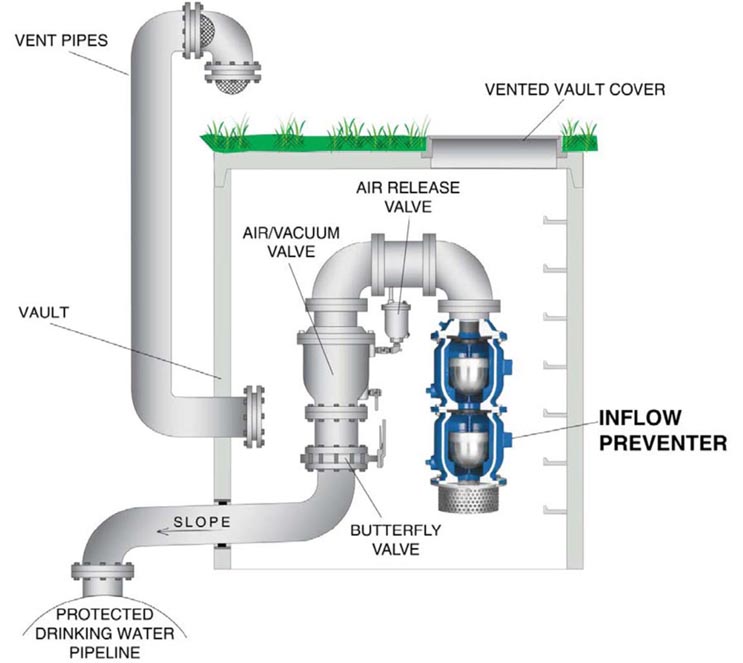 The Inflow Preventer is piped to the outlet of the air valve or system vent pipe in the vertical position and will admit and vent air out its screened bottom. The device can be mounted adjacent to the air valve or several feet away on the side of the vault. The device is available with a side bracket for wall mounting on larger vaults.

Given the heightened demand for security and safe drinking water, inflow prevention is important because air valves and reservoir vents are vulnerable to flood contamination as well as malicious tampering. The use of vent pipes can worsen the problem by allowing cold air to enter the air valve and potentially make it inoperable due to freezing and directly exposing the pipeline to the outside and malicious tampering. AWWA C514 Inflow Preventers can be applied to new or existing air valves and reservoir vents to substantially mitigate these threats.

Diane Meyer is Director of Marketing for the Val-Matic Valve & Manufacturing Corporation. She is also a member of the Water and Wastewater Equipment Manufacturers Association (WWEMA) Board of Directors and serves on the Executive Committee as the Treasurer of the association as well as the Investment Committee. WWEMA is a non-profit trade association formed in 1908 to represent water and wastewater technology manufacturers and related service providers. WWEMA is made up of many of the most prominent and influential companies in the industry who are working together to shape the future of water and wastewater technology in the U.S. and around the world. For more information about WWEMA, go to www.wwema.org. Interested in becoming a WWEMA member? Contact WWEMA Executive Director, Vanessa Leiby at vanessa@wwema.org.