WWEMA Window: Congress Ends The Year With A Splash 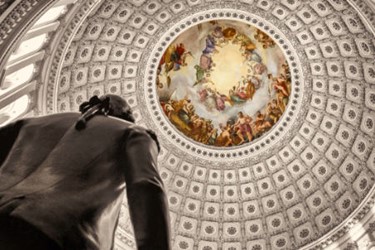 Congress ended 2019 with a splash, culminating in a budget for Fiscal Year 2020 (FY-20), House passage of the U.S-Mexico-Canada Agreement (USMCA) on trade, and impeachment of the President of the United States. On the issue of the budget, the House passed two “minibus” bills on December 17, 2019 to fund the federal government through September 30, 2020, setting up a process to get the bill approved in the Senate and signed by the president by the December 20, 2019 deadline to avert a federal government shutdown. The $1.4 trillion deal will raise discretionary spending by $49 billion.

The Domestic and International Assistance Minibus is an eight-bill domestic package that includes Labor-Health and Human Services-Education, Agriculture, Energy-Water, Interior-Environment, Legislative Branch, Military Construction-Veterans Affairs, State-Foreign Operations, and Transportation-Housing and Urban Development, which passed by a 297-120 vote. A second National Security Minibus that includes Defense, Commerce-Justice-Science, Financial Services and General Government, and Homeland Security passed by a 280-138 vote. The minibus contains new and expanded funding for many agencies and actions including:

In a long-anticipated and long-awaited action, the House Ways and Means Committee voted on December 17, 2019, with bipartisan support, to approve the implementing legislation of the United States-Mexico-Canada (USMCA) trade agreement, setting up a “get-out-of-town” vote by the end of the week. The USMCA, once approved, will replace the current North American Free Trade Agreement (NAFTA). The full House is expected to vote on the legislation on December 18. Senate Finance Committee Chairman Chuck Grassley (R-IA) introduced a companion measure, S. 3052, on December 16, 2019. The Senate plans to vote on the agreement in early January, after the impeachment trial of President Trump, according to Senate Majority Leader Mitch McConnell (R-KY). https://ustr.gov/trade-agreements/free-trade-agreements/united-states-mexico-canada-agreement/agreement-between.

Finally, in a tale of two parties, the House of Representatives formally voted to impeach President Trump after a day of debates on December 18, 2019. The House voted almost entirely along party lines for two articles of impeachment to remove the president from power — abuse of power and obstruction of Congress. The House voted 230-197 to charge the president with abuse of power and 229-198 to charge him with obstruction of Congress. Trump is only the third president to be impeached, joining President Andrew Jackson in 1868 and President Bill Clinton in 1998. President Richard Nixon resigned in 1974 before impeachment proceedings against him could reach the House floor. Both Johnson and Clinton were acquitted by the Senate, and such will likely be the case with

May we all take time during this holiday season to reflect on all the good that is America and the future that we want to create for our children and future generations. Happy holidays from all of us at WWEMA.

Vanessa M. Leiby is the Executive Director of the Water and Wastewater Equipment Manufacturers Association (WWEMA). WWEMA is the non-profit trade association representing water and wastewater technology manufacturers and related service providers. Together we are working to shape the future of water and wastewater technology in the U.S. and around the world. For more information about WWEMA go to www.wwema.org.