Watergen Provides 120 Orphans In Uzbekistan With Fresh Water From Air 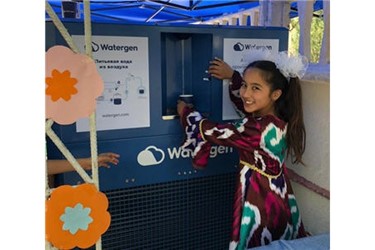 Watergen, an Israel-based innovative company that creates clean water out of air is now providing a source of freshwater for over 120 children living in an orphanage in Uzbekistan’s city of Bukhara. The technology comes in the form of an atmospheric water generator known as the “GEN-350,” which can produce up to 900 liters of water per day. A popular tourist destination but also associated with arid weather conditions, Bukhara has recently been experiencing serious water shortages. Earlier this month, water supply was even disrupted for almost two days. The entire city of Bukhara was left without drinking water including several busy hotels. Since the local underground water is unusable, fresh water is currently supplied to Bukhara from the city of Samarkand, almost 300 km away.

With a weight of just 800 kilograms, the GEN-350 is transportable and can be installed easily. Each unit contains an internal water treatment system and need no infrastructure except a source of electricity in order to operate. The GEN-350 was installed at the orphanage as part of a test pilot, estimated to run for about two months, in order to demonstrate the generators unique capabilities to produce hundreds of liters of clean, safe-drinking water in the arid environment of Bukhara.

Attending the inauguration ceremony of the GEN-350 were senior political leaders in Uzbekistan including First Deputy Prime Minister, Achilbay Ramatov; Prosecutor General, Otabek Murodov; Governor of the Bukhara region, Uktam Barnoev; and Mayor of Bukhara, Karim Kamolov. All signs show that the the pilot has gotten off to a great start. Watergen’s Vice President of Sales and Marketing, Michael Rutman, who was present at the ceremony said: "I'm very pleased with the results of the GEN-350. The children were very excited to drink the high quality water from the GEN-350.”

Watergen’s president, Dr. Michael Mirilashvili added: “Uzbekistan's water utility company was thrilled with our water from air solution and requested to run pilots in several other regions of Uzbekistan. Although there is only 20% humidity in the air of Bukhara, the GEN-350 was still able to generate hundreds of liters of high-quality drinking water.”

Dr. Mirilashvili is also the visionary behind Watergen’s goal to provide clean, safe-drinking water to every human around the world. Watergen’s efforts to make fresh, pure water available around the globe earned the company its place on the World Economic Forum’s list of the world’s top technology pioneers in 2018.

About Watergen
Founded in 2009, Watergen has devoted its innovative technology towards solving the world’s water crisis under the leadership of its president, Dr. Michael Mirilashvili. Watergen provides a game-changing water-from-air solution based on its proprietary patented GENius technology that uses humidity in the air to create clean and fresh drinking water to people everywhere.

Watergen’s WAG are installed in several countries around the globe.