Water Sustainability: Through The Lens Of A Hollywood Film Director

Making a film about water? Sign me up. When I heard that Xylem and Manchester City wanted to create a film about water challenges, I had to get involved. After all, I spent the better part of four years developing and directing a disaster movie called The Wave. I’m also from Norway, where water literally falls off the mountains. I thought I knew everything I needed to know about water, and then some. But then I learned more about the project and truly began to understand the incredible water challenges facing the world, the heroic work being done by utilities and the entire water sector, and why we simply must get the word out to the public about water.

Xylem and Manchester City challenged me to bring my storytelling expertise to bear to capture the imagination of millions of football fans across the world and to galvanize them into taking action to address water sustainability — and it’s been one of the most meaningful projects in my career.

It’s not often that you come across a script that hits you both emotionally and intellectually, that makes you reconsider how we treat our resources and our planet. When I first read the script for End of Football and learned about the extent of the water challenges escalating around the world and threats facing our future, I could not look away.

But how to get others engaged? The world’s full of noise. There are a million media outlets, and everyone’s a publisher. How could we cut through that noise and make people sit up and make a path for change? Here are three tips anyone can use to drive water and climate change storytelling:

There’s something about the power of film that can connect with you in a really strong and emotional way. I believe that through emotionally engaging storytelling we can help instil awareness and positive change, even if the viewer is just subconsciously engaged. We can help change attitudes and behaviours, in some cases in a more powerful way than bombarding people with facts and figures.

Our film illustrates what the future could be like if we don’t take steps to protect the world’s depleting water resources. The UK Environmental Agency and other scientific bodies predict severe water shortages by 2045, and the film storyline highlights how this could impact the game we love: football. It follows a young fan — initially as a child, then we see her grown up. By the end of the story, her childhood hero football star Phil Foden has become manager of Man City — but he’s mourning “a sad day for football,” watching their last game. As the film title suggests, we’re facing “The End of Football.”

With every choice we made for the film, we wanted to underscore the gravity of the problem — water wastage is happening all around us, and unless people take action there will be major impacts within one generation. As a storyteller, this was a rich challenge. We had to look for ways to build a narrative that raised the stakes. A steady drumbeat of moments heightened the tension; fires raging on the TV news cast and the price of bottled water changing from £19 to £20 in a mere moment.

Through special effects and time progression, for example, we created that unease that makes audiences take notice.

It’s an unusual idea — teaming up with a football club and a Fortune 500 company to get people engaged about sustainability issues. But when you think about it, it’s a brilliantly innovative idea too: football is the world’s favourite game; and film is the most powerful medium for engaging attention, making connections, and getting an argument across.

We often take it for granted that if you turn on a tap, an unlimited supply of clean water comes out. But hang on. Isn’t this idea of water running out irrelevant to a developed nation? Surely this could sound like scaremongering.

For me, it was important to address this apathy head on. Producing great content

is an art. Powerful storytelling creates an emotional response that causes audiences to share, click-through, subscribe, or even buy. By bringing awareness to how water scarcity could impact the game we love, and how that could affect those we know and love, we’re able to tap into that emotion. Here our screenwriter’s guiding principle is to encourage us to question the legacy we want to pass onto our children. That clear purpose allows us to move the viewer from one stage in their journey to the next.

I think our screenwriter was also very clever in enlisting humour to communicate this message. We see the young City fan correcting her Dad on legendary player Eric Brook’s goal-scoring performance, and the pair anticipating her walking out at The Etihad Stadium as Manchester City mascot. What’s great about humour is that it can take the edge off a serious message so that you're not feeling like you're being preached to as an audience. It's almost like a Trojan horse — where you pull the audience in and get them engaged, and then you surprise them with the message, making the impact really powerful.

But how do we get fans watching in the first place? The film’s narrative takes place over 25 years and sees current City midfielder Phil Foden take up the role of the club’s coach. By taking fans on this journey, we got them talking about City’s prospects under Foden’s reins — it was a neat touch.

Evidently the “End of Football” has struck a chord. In just three weeks, it was watched almost 11 million times. It’s something I’m proud to have supported. I think it is a beautiful way of raising the awareness of our water challenges in the public mind, and at the same time celebrating a legendary team in the world’s greatest sport.

I'm not the biggest sports fan, but as an old heavy metal head what I can relate to is that burning enthusiasm for the thing you love — and the collective spirit that comes with it. With the COVID-19 pandemic we’ve gotten a glimpse of a future without football matches and concerts and I don't think it's something anyone would want, for themselves or the little ones that we're passing this on to. So hopefully, the motivation to also do something about our water challenges will be a lot stronger now.

Now I just hope that people will turn off the tap when they're brushing their teeth so we still can enjoy football and concerts in 2045... 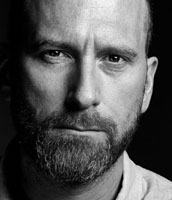 Norwegian born film and commercials director Roar Uthaug has always had a love for film. He graduated from the Norwegian National Film School in 2002. His debut feature film ‘Cold Prey’ won two Amanda awards, the Norwegian equivalent of the Oscars, for best actress and people’s choice. It then proceeded to sell to both the U.S. and the UK and spawned two sequels. In 2017 he directed The Wave, Norway’s Best Foreign Film submission for the Oscars that year and, more recently, the 2018 reboot of Tomb Raider starring Alicia Vikander. He has shot commercials for several global brands including Panasonic, Doritos, and Smart. You can hear more from Roar about climate change storytelling in Xylem’s One Minute in Water series.”