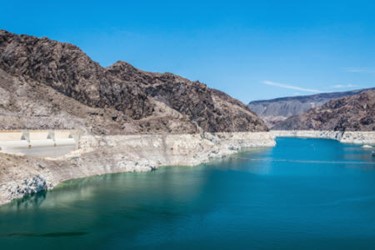 In the wake of ongoing source water scarcity, one of the country’s most critical — and critically stressed — drinking water sources will soon benefit from mandatory conservation measures.

“Arizona, Nevada and Mexico will be required to take less water from the Colorado River for the first time next year under a set of agreements that aim to keep enough water in Lake Mead to reduce the risk of a crash,” according to USA Today. “The federal Bureau of Reclamation activated the mandatory reductions in water deliveries [earlier this month] when it released projections showing that as of Jan. 1, the level of Lake Mead will sit just below a threshold that triggers the cuts.”

The agreed-upon cuts stem from the Lower Basin Drought Contingency Plan (DCP), a deal including Arizona, Nevada, Mexico, and California to reduce water consumption if and when supplies become too stressed. Water levels in Lake Mead have now been determined to reach the threshold for “Tier Zero” cuts under the plan.

“At the end of 2019, the projected Lake Mead elevation — the measuring stick for whether there is a shortage declaration on the river for 2020 — is just shy of [1,090 feet],” according to the Central Arizona Project, a renewable water supply center. “And, for the first time, the Lower Colorado River Basin will formally implement reductions outlined in the DCP at the new Tier Zero beginning January 2020.”

Even deeper cuts would have been triggered last year were it not for particularly heavy snow across the Rocky Mountains, which brought reservoir levels up. But even with that fortunate snowfall, regions that depend on the Colorado River will be making significant changes.

“Arizona will see a cut of 192,000 acre-feet in water deliveries next year, or 6.9% of its total allotment of 2.8 million acre-feet,” per USA Today. “Nevada’s share will be reduced by 8,000 acre-feet, while Mexico’s will take 41,000 acre-feet less. That water will remain in Lake Mead, and will only be recovered once the reservoir rises above an elevation of 1,100 feet.”

It’s certainly possible that levels in Lake Mead will get lower before they recover, though the DCP may be a real solution to source water scarcity. The conservation efforts are heartening, but drought is a powerful factor working against them.

“It’s the beginning of a solution and it’s also the beginning of the real problem,” climate scientist Brad Udall told USA Today. “I mean, as much as we’ve seen this problem in the last 20 years, the climate models really project a grim future with regard to temperatures.”