Water Reuse As An Emerging Solution 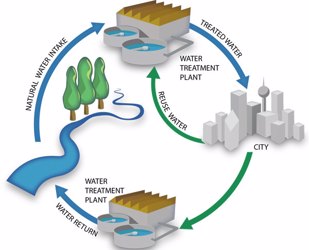 Our world's resources are far from infinite. Water often seems to be abundant, but humanity is putting a great deal of strain on the available surface and groundwater water supplies. Our failure to conserve our water supply is causing droughts, dust storms, and other environmental problems that hurt both humanity and nature. The only way to minimize the situation from turning into a disaster is to start conserving and recycling water.

Managing water is a global challenge that impacts the environmental, social, economic, and political cornerstones of our existence on Earth. Effluent reclamation and reuse provides opportunities to conserve water and maintain the quality of the existing fresh water supplies. Water reuse for various purposes is increasingly practiced throughout the world particularly in arid environments. It is meant to help close the anthropogenic water cycle and enable sustainable reuse of available water resources. When integrated to water resources management, it can be considered as an integral part of pollution control and water management strategies. It may also result in benefits to public health, the environment, and economic development.

The water cycle ensures that used water will eventually work its way back into nature, but it doesn't always end up in reservoirs that we can access. Most humans get their water from rivers, lakes, or groundwater reservoirs. When we put those resources under heavy use, we often draw water from them faster than they can replenish themselves. When we take too much from a surface water source, we could disrupt the rate of recharge and cause the little streams that branch off from it to dry up. When we take it from a lake or from groundwater, we cause them to dry up. They will eventually recover, but only if humans stop drawing water from them.

Water is essential for human survival and well-being and plays an important role to many sectors of the economy. However, water resources are irregularly distributed in space and time, and they are under pressure due to human activity and economic development. Accelerated urbanization and the expansion of municipal water supply and sanitation systems also contribute to the rising demand. Furthermore, climate change scenarios project spatial and temporal variations of water cycle dynamics, which exacerbate the discrepancies between water supply and demand. Water for irrigation and food production constitutes one of the greatest pressures on freshwater resources, with agriculture accounting for over 70 percent of global freshwater withdrawals and up to 90 percent in some fast-growing economies.

Water recycling refers to strategies to reuse water beneficially to reduce the use of available natural water resources. Every drop of water that we recycle is a drop that we don't have to take from our limited water resources. At the simplest level, water recycling can mean harvesting rainwater in a barrel.

How Does It Help?

Water reuse and recycle offers several benefits, both to us and to the world in which we live. The biggest benefit comes from preventing water shortages. That offers protection to the world's water resources, which would get drained to ensure that humans can continue to prosper while we run out of water. Recycling also ensures that we have enough water to grow crops, maintain our hygiene, and simply stay hydrated. Almost every aspect of human life uses water at some point, so running out could cause our entire civilization to collapse.

Recycling also helps to prevent pollution, especially in an industrial context. Many machines and appliances produce wastewater that carry some pollutants. If that water enters the environment without treatment, it can spread those pollutants across a surprising distance and give them a chance to kill plants and animals. Wastewater treatment and water recycling prevents the water from contaminating our rivers, lakes, and groundwater.

The Future Of Water Reuse

Right now, most people think of water recycling as an optional activity. People who care about the environment or want to save money on their water bill do it, but most other people are quite content to ignore the issue. That is likely to change in the future.

The demand for water is directly connected to both the number of people in the world and the standard of living that they want to maintain. The world's population is high and still climbing, so the demand for water is not going to drop any time soon. The developing world is also getting richer, and the increased desire for luxury products will keep increasing the amount of water that gets diverted to industry and inefficient forms of agriculture.

This means that we need to find other ways to conserve water. Recycling is not our only option, but it is one of the things that everyone can do to help. As the demand for water increases, the price of potable water is likely rise, and more people will recycle water. Even the people who don't care about the environment will start to recycle in order to save money.

Our purification technologies are also advancing. That will make water recycling even easier in the future, both on a large scale and at a personal level. That makes it seem likely that water recycling will play a large role in most water management systems in the future, especially if more people get started with it now. Important challenges in the global water situation, mainly resulting from worldwide population growth and climate change, require novel innovative water technologies in order to ensure a supply of drinking water and reduce global water pollution.

As freshwater supplies become more limited and economic development comes with increasing water demand, technologies such as desalination and water reuse are often recognised as solutions with a great potential in reducing the gap between availability and demand. However, on a larger scale, brine released from desalination plants includes chemical residues that negatively affect coastal ecosystems. Furthermore, although desalination may solve the problem of water scarcity in water stressed areas, there still lies the problem of associated wastewater management and the costs involved. The ability to reuse water, regardless of whether the intent is to augment water supplies or manage nutrients in treated effluent (also a factor leading to water reuse), has positive benefits that are also the key motivators for implementing reuse programs. These benefits include improved agricultural production; reduced energy consumption associated with production, treatment, and distribution of water; and significant environmental benefits, such as reduced nutrient loads to receiving waters due to reuse of the treated wastewater. Even though reclaimed water reuse is currently implemented in many countries, its potential has not yet been exploited in many areas, and the proportion of water reuse in total wastewater generation is still small. However, this is changing. This emerging worldview that considers that a third industrial revolution is underway, supported by the age of the internet that facilitates the exchange of ideas at a pace never seen before, sees many states beginning to use their financial and regulatory capacity to kickstart a circular economy that could create significant synergies for the wide adoption of water reuse. The concept has emerged in response to drawbacks of the conventional ‘take-make-consume and dispose’ model of growth and the shift towards sustainable development. This paper therefore examines water reuse from a circular economy perspective and investigates opportunities and risks for water reuse with the transition to such an economy

Many cities are running out of options, and they are realizing that high-grade urban water reuse is much cheaper than the alternatives. Although it is water scarcity and water supply demands in arid and semi-arid regions that have driven reuse as an alternate water supply, there are still many water reuse programs.

Dennis Abraham Thazhamon is Managing Director of Josab India Pvt Ltd. He has a Post Graduation Degree Certificate in Quality Management in Terotechnology and another Post Graduation certificate in Marketing and Strategy with a focus on entering new markets from the Linneuniversitetet, Sweden.