How much water is available in the atmosphere surrounding these cities? If enough is available it may be practical to distribute water-from-air machines (processors of atmospheric water vapor; mechanical dehumidifiers integrated with water treatment systems, often called atmospheric water generators) in these cities for a decentralized water supply solution. Decentralization is attractive because infrastructure can be built in a modular fashion. There is no need for the high capital cost of a massive central water treatment plant and distribution infrastructure. This approach is an attractive solution for tropical sites where population growth causes water consumption to outstrip the capacity of local treated liquid water resources (whatever their raw-state quality) to meet the demand.

Although it is invisible, the moisture in the air is a water resource just like a river, lake, or groundwater.  There is an important difference. The water in the air is in its gaseous phase, not the liquid phase. In contrast, liquid water droplets in the air are visible as clouds or fog. Fog harvesting, unlike mechanical dehumidification, captures liquid water droplets out of the air, usually with net-like structures and does not have to contend with the energy cost of a phase change. Fog harvesting is not discussed further here.

Changing the phase of water from gas to liquid consumes energy. In theory, 681 kWh is needed to condense, by natural processes, sufficient water vapor out of the air to fill a tank with a volume of one cubic meter (1000 L). Fortunately, in practice, we can do better than Mother Nature. To fill a 1000 L tank, a mechanical dehumidifier with four compressors, about the size of a rooftop air-conditioning unit (Fig. 1), operating in a place with water vapour density of about 15 grams per cubic meter, consumes about 400 kWh of energy. Smaller, household scale mechanical dehumidifiers have a product water energy cost closer to the natural 681 kWh per cubic meter. 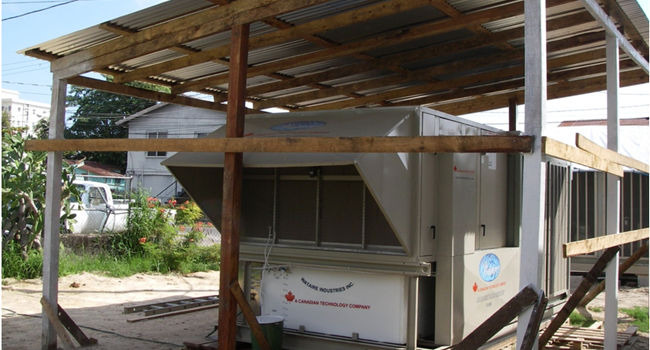 Figure 1: A processor of atmospheric water vapor with a freshwater production capacity of 2500 liters per day. Canadian Dew Technologies Inc. commissioned this machine in Belize City for a client in 2006. Photo by the author.

Because the energy cost of the product water from dehumidification is relatively high, it is crucial to understand the nature of the water resource which is the moisture in the air. With this knowledge, cost-effective use of the resource becomes possible. Atmospheric scientists use the unit specific humidity [mass of water vapor (g) / total mass of the mixture of air and water vapor (kg)] to measure the amount of water vapor in the atmosphere. When discussing the process of extracting water molecules out of the airstream through a dehumidifier it is more intuitive to use a mass and volume based unit like water vapour density [g/m3]. It is easy to imagine that 15 g/m3 is the mass of a tablespoonful of water in an air volume like that inside the cabin of a two-seater sedan automobile. A global mean water vapor density map is shown in Figure 2. Water vapor density used to be called ‘absolute humidity’, an ambiguous nomenclature now used rarely. 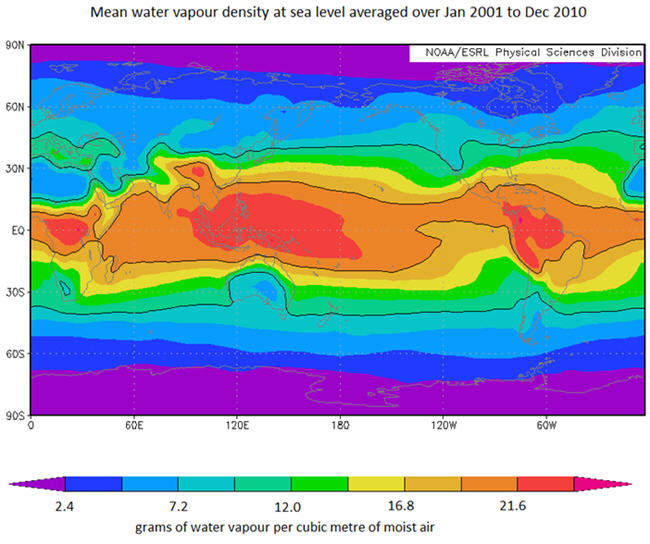 Figure 2: Global mean water vapor density at sea level averaged over the 10-year period 2001 to 2010. The base image was provided by Physical Sciences Division, Earth System Research Laboratory, NOAA, Boulder, Colorado, from their website at http://esri.noaa.gov/psd/.

Because the water production capacity of dehumidifiers is rated at a standard combination of temperature (26.7°C), relative humidity (60%), and air pressure (1 atmosphere) which corresponds to a water vapour density of 15.3 g/m3, I created an index for the water from air resource that is the ratio of the actual water vapor density to the standard water vapor density. This way, if the machine is operating in ambient air at standard conditions, the resource index is unity (1) and we know that the machine will produce water at its rated capacity. When the water-from-air resource has values less than unity we know that the machine’s rated capacity must be de-rated by some factor. This factor is discussed in Box 1.

During July, most of the cities listed by The Nature Conservancy are enveloped by moist air with a water vapour density of at least 15 grams per cubic meter. Mechanical dehumidification, under ideal conditions, can reach efficiencies of 60% in extracting water from the air flowing through the chilled evaporator coils. Efficiency is capped because coil temperatures are controlled to never dip below approximately 5°C  to prevent frost build-up on the coil which could overload the machine’s compressor(s) and damage it (them).  Typically, a dehumidifier can extract about 9 grams of water from a cubic meter of tropical moist air. In these conditions, a machine with 40 Tons (141 kW) of refrigeration capacity (with the dimensions of a 20-foot shipping container; Fig 1) can produce 2500 L of freshwater every 24 hours. An objective evaluation of the water-from-air resource is essential for minimizing time and effort to help millions of people. A dimensionless index and word-based/color-coded grading system to quantify the water-from-air resource was described earlier. The index is used to assess the resource in the twenty-three cities threatened by or already experiencing water scarcity. A tabular guide (Table 1) with color-coding from the index scheme makes the assessments easy to visualize. At a glance, we discern that prospects for tapping the water-from-air resource are less favorable at higher elevation sites outside the tropics. 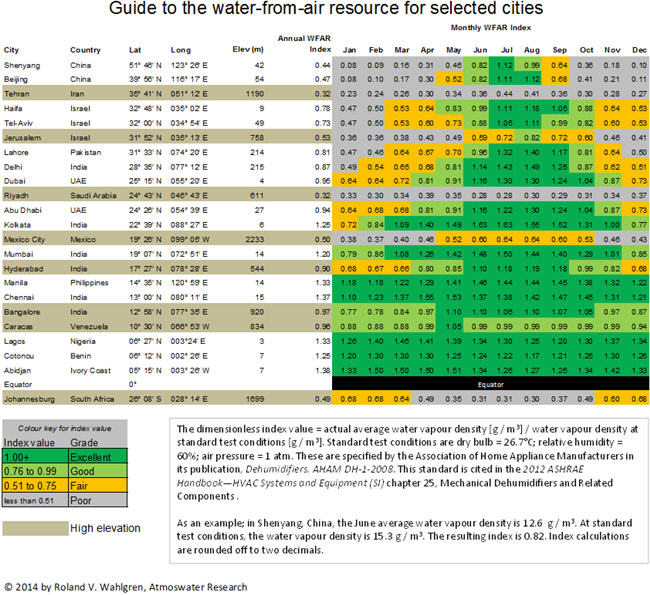 Table 1 lists the cities, geographical coordinates, elevation above sea level, the annual Water-from-Air Resource (WFAR) Index, and the monthly indices. The cities are sorted first by decreasing latitude (N or S) and then by the annual index. The resulting pattern of values and colors shows water vapor density is lowest near the Earth’s poles and highest near the equator. This is because the prevailing colder air at higher latitudes holds less moisture than the prevailing warmer air at lower latitudes.

Water vapor density decreases with elevation above sea level. This is apparent from higher altitude cities that interrupt the latitudinal pattern. From the equator and northwards, these seven cities stand out: Caracas, Bangalore, Hyderabad, Mexico City, Riyadh, Jerusalem, and Tehran.

The reversal in pattern between two high elevation cities with similar latitudes but in different hemispheres, Mexico City (2233 m) and Johannesburg (1699 m), is a result of the northern and southern hemisphere high sun seasons being opposite in time. These two cities are marginal sites for the operation of atmospheric water generators.

Cities within the band defined by the Tropics of Cancer (23.5° N) and Capricorn (23.5° S) are likely to have fair to excellent operating conditions during the year for atmospheric water generators. Cities at extremely high elevations, such as Mexico City are exceptions.

Riyadh (611 m) and Tehran (1190 m) are cities whose water vapor density regimes are impacted both by high elevation and prevailing dry air masses. Unfortunately, these two cities are unsuitable for practical operation of water-from-air systems.

In contrast, 12 lower latitude cities of the twenty-three listed are suitable for year round operations (Abidjan, Cotonou, Lagos, Caracas, Bangalore, Chennai, Manila, Hyderabad, Mumbai, Kolkata, Abu Dhabi, and Dubai). The remaining seven cities in higher latitude, temperate climate regions have a water-from-air resource that conveniently peaks in the summer months when droughts are most likely to be a problem (Delhi, Lahore, Jerusalem, Tel Aviv, Haifa, Beijing, and Shenyang).

The water treatment sub-systems in water-from-air systems must be designed to cope satisfactorily with the severe air pollution conditions that are well-known in, for instance, Delhi and Beijing.

About fifty companies worldwide are marketing water-from-air systems. About half of these companies are located in the USA. This technology has evolved through the research & development phase and the industry is either in its ascent or just entering maturity. The earliest patent in this field appears to be one issued to E.S. Belden in 1900, titled, “Apparatus for removing moisture from air”. This was United States Patent 661,944. From the 1970’s to the present there has been a steady stream of at least 50 patents issued for various innovative aspects of water-from-air devices.

The quality of firms involved in the water-from-air industry varies widely — from competent to scary. Scary companies may, for example, imply on their website that relative humidity by itself sufficiently describes the water-from-air resource. Here is a checklist for choosing credible suppliers of equipment:

I focused on 23 cities for which other researchers declared an urgent need to solve water scarcity problems. By using the analysis methods in this article I discovered that deployment of water-from-air systems is likely to be practical in nineteen of these cities. For maximum benefit to the inhabitants, the supply-side solution of deploying water-from-air systems should be coordinated with demand-side solutions like improvements in water distribution efficiency, reductions or elimination of mismanagement of surface water and groundwater, and increased water conservation actions by all sectors of society. An appreciation of the water-from-air resource by water professionals increases the range of solutions for water security challenges facing people in some of our most populous cities.

Roland V. Wahlgren, BSc, MA (Physical Geography), is Principal of Atmoswater Research and President of Canadian Dew Technologies Inc. He has researched and developed the knowledge-base for water-from-air technologies since 1984.