By Mike Preston And Rachel Swezy 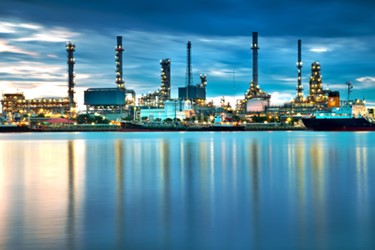 A recent survey digs into the treatment aspects of water in the power industry, revealing how electric utilities are responding to concerns over regulations and volumes of use.

Thermoelectric power and irrigation were the two largest uses of water in the U.S. in 2015, according to the U.S. Geological Survey. In 2015, nearly all of the 133,000 million gallons per day (MGD) withdrawn by thermoelectric plants came from surface-water sources, which were predominantly freshwater. Withdrawals for thermoelectric power accounted for 41 percent of total U.S. water withdrawals — a significant amount — but much of that water is returned to the environment.

Water is a vital consideration for thermal power plants, where heat and steam drive thermoelectric facilities. To no great surprise, given water’s intensive role in power generation, electric utilities are investigating ways to be smarter about how it is used. The Black & Veatch 2019 Strategic Directions: Electric Report,1 which polled nearly 900 energy sector stakeholders, showed that more than half (52 percent) of electric utilities define water management as very or extremely important for their utilities.

When looking at the results by population served, 49 percent of operators who serve more than 2 million residents feel that same way. Utility stakeholders in population centers of fewer than 500,000 were less concerned, with roughly one-third of respondents saying they didn’t consider water management important at all — perhaps because they had sustainable water supplies.

After a decade of working to adhere to tightening federal regulations — and in many cases, investing heavily to do so — electric utility operators and managers continue to grapple with water issues. Black & Veatch’s survey suggests that utilities may be fatigued by these regulatory demands, even as they pursue greater sustainability and resilience.

Utilities must meet state and federal regulations, and regulators wield considerable weight when it comes to policing a power plant’s operations — from overseeing emissions and water supply/usage to ensuring commitment to discharge requirements, to monitoring a utility’s rates.

The U.S. EPA recently updated federal power plant discharge rules (ELGs) that hadn’t been updated for over 30 years. In 2016, the EPA finalized new technology-based effluent limitations (TBELs), which require a minimum level of treatment for point source discharges, based on available treatment technologies.

The final regulations are still in discussion, creating some uncertainty for power generators. However, in anticipation of the upcoming changes, some utilities have become early adopters, investing millions of dollars to upgrade their onsite wastewater treatment facilities, while others preferred to hold off and wait until a final rule had been passed.

According to the survey, 50 percent of respondents see regulatory compliance as the No. 1 reason to make water management a priority. But savvy utilities also understand the weighty role that stewardship and sustainability play when it comes to managing a utility’s public image — particularly when it comes to water.

Renewable energy sources, such as wind and solar, require little to no water. But water continues to play a critical role at coal, gas, and nuclear power plants. An interesting caveat is that, despite continuing growth in power supply — a trend that has held firm since the 1970s — the volume of water withdrawals for power generation is declining. In some ways, this is driven by changes in power generation technology, but it also reflects utilities’ growing commitment to sustainability and water stewardship.

According to the U.S. Energy Information Administration, in 2017, the estimated average amount of water withdrawn per unit of total net electricity generated was 13.0 gallons per kilowatt-hour (kWh). This is slightly lower than the 15.1 gallons per kWh withdrawn in 2014.

When asked to define the primary drivers that are making water management a priority at their sites, respondents to the survey pointed to compliance and regulatory concerns, followed by water stewardship and sustainability. In some cases, the latter issues have motivated utilities to foster relationships with water and wastewater utilities, specifically to obtain reclaimed water for use in the cooling tower processes.

These investments, combined with an element of regulatory fatigue, are driving utilities toward hitting the pause button on additional wastewater spending. A number of thermoelectric facilities have also recently modernized their water and wastewater systems, which may also relieve utilities of this burden. 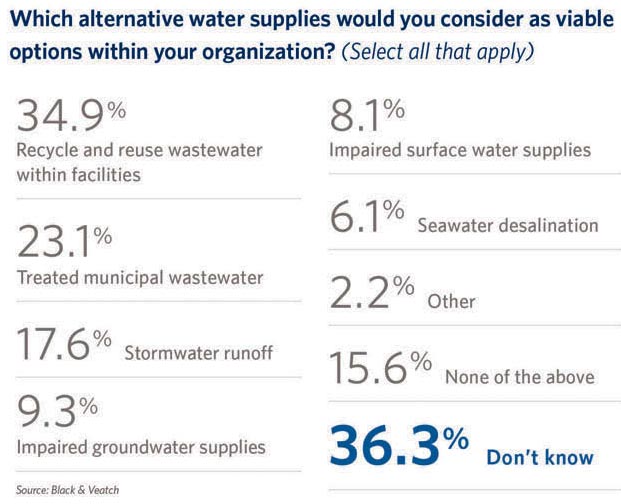 According to the Black & Veatch survey, nearly a quarter of respondents — 22 percent — do not see their utility making any investments in water and wastewater supply and treatment infrastructure over the next three years. A combined 25 percent of respondents do anticipate making investments: 6 percent said their utility plans to invest less than $1 million, 11 percent plan to spend between $1 million and $10 million, while 9 percent envision spending more than $10 million. More than half (53 percent) responded that they simply don’t know.

Taking a closer look at these numbers, these spending forecasts vary according to the sizes of the utilities’ service areas. Thirty-two percent of the smaller utilities surveyed — those that serve fewer than 500,000 residents — do not plan to make any additional investments in the next few years. Larger utilities — those serving more than 2 million people — had very different responses, with 34 percent anticipating investing more than $10 million in infrastructure spending. 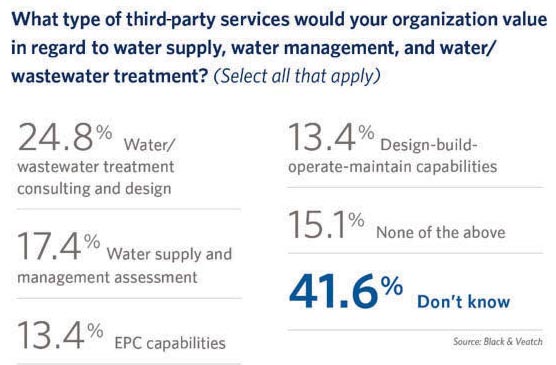 There is no doubt that these investment decisions are rife with complexity, involving a slew of options and price tags. Survey results show that utilities are willing to enlist outside help, with a quarter of respondents stating that they would value third-party services that offer water and wastewater treatment consulting and design, followed by a water supply and management assessment (17 percent) and advice about engineering, procurement, and construction (EPC) capabilities and design-build-operate-maintain capabilities (Figure 2).