Constructed wetlands have become recognized as a proven, effective water treatment technology that provides a natural way of removing unwanted nutrients and pollution. Wetlands allow contaminants to be uniformly distributed, and when exposed to growing organisms, nature converts them into a productive biomass. As microbes consume “pollution” in the water, higher organisms consume the microbes and ultimately become a part of the food chain. The result is that wetlands transform pollution into biological diversity.

BIOHAVEN® FLOATING TREATMENT WETLANDS
BioHaven® Floating Treatment Wetland (BFTW) Technology is designed around the same principles as a naturally occurring wetland. These man-made “floating islands” provide an optimal habitat for microbial and plant species. Similar to a wetland, the plants and microbes improve water quality. Unlike natural wetlands, they offer enhanced microbial growth by expanding available underwater surface area; i.e. microbial habitat. This phenomenon is created through patented design. (See Figure 1) The result is a new and strategic means to achieve a concentrated wetland effect. Along with the nutrient removal processes, BFTWs also provide ancillary benefits for water treatment. They immediately increase retention time as the flow of water is “redirected” through or around the BFTWs and the physical embodiment of the BFTWs also physically traps solids within the water column.

ELAYN HUNT CORRECTIONAL FACILITY OXIDATION POND
The Elayn Hunt Correctional Facility has struggled to meet discharge compliance. Parameters of concern have included elevated levels of Biological Oxygen Demand (BOD), Total Suspended Solids (TSS), and Fecal Coliform. Secondarily, sludge accumulation in the pond has limited the ability of the pond to provide effective treatment. Remediation of this problem would have required extensive dredging of the pond and would have placed a high financial burden on the Louisiana Department of Corrections at a time when budgets were decreasing.

On March 9, 2011, Martin Ecosystems installed BioHaven® Floating Treatment Wetlands into the Elayn Hunt Correctional Oxidation Pond in St. Gabriel, Louisiana. (30º 16’06.10” Latitude 91º 04’32.61” Longitude) This project was funded by the Louisiana Department of Environmental Quality in partnership with the Louisiana Department of Corrections. The primary goal for this project was to determine the effectiveness of BFTWs in removing the unwanted nutrients causing noncompliance issues.

A total of 1560 square feet of BFTWs were installed into the 5.1 acre pond providing 0.7% top surface area pond coverage. Martin Ecosystems strategically placed the BFTWs in front of the in- Figure 1 flow pipe to achieve the greatest amount of inflow water passing through the BFTW matrix and to slow the water as it entered the pond, ultimately increasing retention time. This installation location allowed for the greatest amount of treatment opportunity. (See Figure 2) 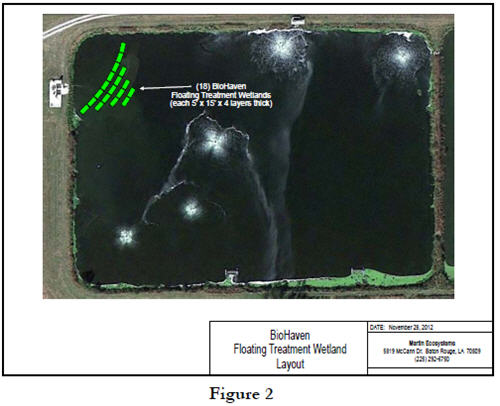 Plant holes (2” diameter) for each BFTW are pre-drilled during manufacturing which allows for easy and efficient planting at installation. Photo 1 shows Martin Ecosystems staff planting the BFTW. Duckbill Earth anchors were driven into the side of the pond to anchor the BFTWs in place. 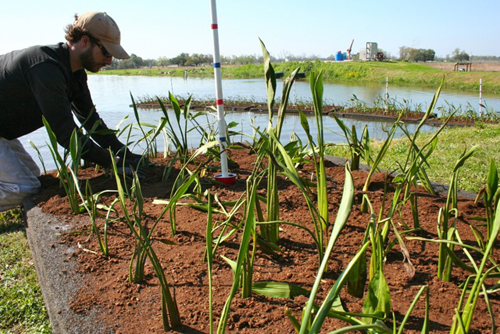 Planting the floating wetlands for installation in March 2011.

Challenges
Over the course of the study, the BFTWs faced two challenges. The first was difficulty in getting the vegetation to establish and grow. Approximately 60% of the plants initially planted in March 2011 did not survive. Plant survival in all prior projects had never been an issue, so there was uncertainty about the cause. A drought was occurring in South Louisiana at the time of installation, which was considered as a factor. The BFTWs were also floating unusually high out of the water as solids were collecting around and underneath. This was not allowing the roots of the new vegetation to adequately obtain enough water. Vegetation typically goes into a “shock” period when planted and installed into a wastewater ponds, so we allowed time for the plants to recover, but ultimately they did not. We replanted with additional Common Rush (Juncus effusus) on May 19, 2011 and again on June 30, 2011. Weighted sacks were also placed on the BFTWs in order to achieve lower floatation with the hope of providing greater water access for the plant roots. By July 2011(Photo 2), the vegetation began establishing and in August 2011(Photo 3) nearly the entire BFTW was covered with vegetation. 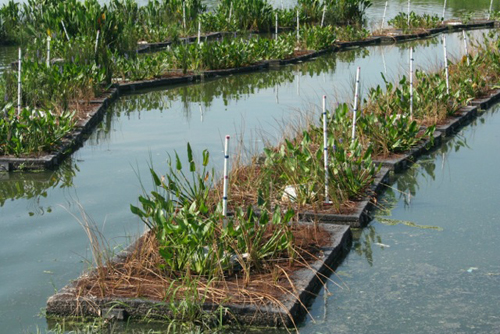 Vegetation becoming established and growing 4 months after installation in July 2011. 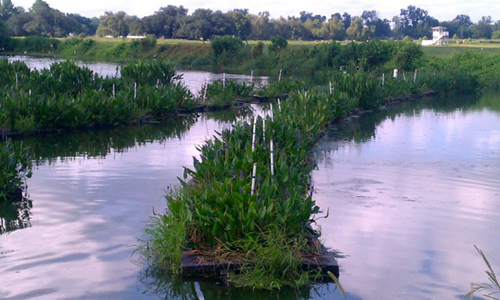 On April 4, 2012, St. Gabriel had an unusually large rainfall, which presented another challenge. According to Mark Covington with Thornton, Musso, & Bellemin, Inc, the waste water plant operator for Elayn Hunt Correctional, “This particular week had unusually high flows due to heavy rains. The day before sampling the lift station pumped over 400,000 gallons of water instead of the usual 200,000 gallons. This high flow caused inadequate aeration and settling time thus affecting BOD at the outfall.” This rain event was the first noncompliance event since the BFTWs were installed in March 2011. The BOD level on this day was 76 mg/L with a permitted requirement of 45 mg/L. Despite this event, the system recovered the following week with a BOD sample of 5.4 mg/L.

Results
At the start of this project enhancing facility compliance was a primary goal. The data in Figure 3 suggests that the BFTWs have met this objective. The non compliance events before installation of BFTWs exceeded 5 and sometimes 10 per year.

Financial Considerations
The total cost of this project was less than $40,000.00. This included the BFTW installation, plants, and monitoring for one year. Dredging the pond would have had a much higher ticket price estimated at over $1,000,000.00. BFTWs were installed for a fraction of that cost; demonstrating their ability to help communities as well as, public & private industry achieve and maintain consistent compliance in a very cost effective manner. It should be stated that annual and/or bi-annual trimming of the plants will be required for maintaining the BFTWs. This would be a minimal added cost.

Project Extension Note
In November 2012, the BFTWs were removed from the wastewater pond in order to remove all vegetation and replant them with Sunshine Vetiver Grass (Chrysopogon zizanioides). Martin Ecosystems has found this grass to have extremely high nutrient removal rates, which have the potential to further enhance the treatment capabilities of the BFTWs. Louisiana State University’s Ag Center has agreed with the Louisiana Department of Environmental Quality and the Louisiana Department of Corrections to conduct a two year study of BFTWs and Vetiver Grass in waste water treatment. The BFTWs were re-launched on December 20, 2012. Be on the lookout for updates on this new study.