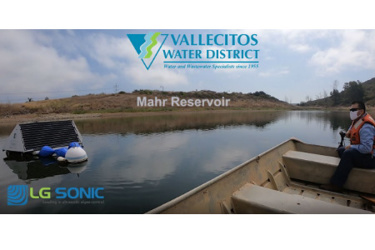 The Vallecitos Water District (VWD) recently received two awards for its innovative use of technology to reduce algae blooms at Mahr Reservoir. VWD received the “Excellence in Action” national award from the WateReuse Association and the “Innovation and Resiliency” state award from the California Association of Sanitation Agencies.

VWD is known for its sustainable practices in water and wastewater treatment processes, without any compromise in water quality. VWD is now using a new ultrasound technology to address water quality at the Stanley A. Mahr Reservoir with a reduced need for chemical treatment.

Mahr Reservoir was completed in 1981. Originally called La Costa Storage No. 1 Dam and Reservoir, it was renamed after VWD’s original founder, 35-year board member Stanley A. Mahr. It stores up to 54-million gallons of reclaimed water to be used later for irrigation. VWD has contracts with the City of Carlsbad and Olivenhain Municipal Water District to provide water as needed, as much as five million gallons of recycled water daily.

Because the reservoir’s location receives intense sunlight with little rain, algal blooms can occur in the nutrient-rich recycled water. The most common method of treating algal blooms is with chemicals. They are costly and labor-intensive to apply.

VWD instead uses technology developed by the international company LG Sonic, which provides a complete overview of the water quality allowing swift identification and treatment of algal blooms.

Every ten minutes, an MPC Buoy in the Mahr Reservoir measures and monitors green and blue-green algae population, pH, turbidity, dissolved oxygen, and water temperature. The data is collected in real time and uploaded to a web-based software. The software uses the data to predict algal blooms three to ten days in advance.

The LG Sonic buoy can create a sound barrier in the top water layer, which affects the buoyancy of the algae, preventing it from rising where it can absorb sunlight for photosynthesis to grow. Without sunlight and nutrients, algae cells sink to deeper water where they degrade due to natural bacteria and do not release toxins into the water.

With overall algae levels reduced by this technology, the need for chemical treatment is also reduced, allowing the Vallecitos Water District to provide high quality reclaimed water to its customers.

LG Sonic’s specific low power ultrasonic transmitters emit signals which are not harmful to people, fish, plants or other wildlife.

“These awards are proof of the Vallecitos Water District’s commitment to innovation,” said Vallecitos Board President, Mike Sannella. “District staff are to be commended for their efforts to use innovative technology to improve and enhance our operations.”

About Vallecitos Water District
As an independent, special district, Vallecitos is dedicated to providing water, wastewater and reclamation services to over 105,000 people in a 45-square-mile area that includes San Marcos; the community of Lake San Marcos; portions of Carlsbad, Escondido and Vista; and other surrounding unincorporated areas.

Due to the evolving situation with the COVID-19 Novel Coronavirus and Executive Order N-29-20, Vallecitos holds board meetings via teleconferencing. The public is encouraged to watch or listen to the meeting from their homes and observe the meeting electronically or listen in by phone. The District’s Board meetings are held on the first and third Wednesday of each month at 5:00 p.m. To provide public comments prior to the meeting, submit comments via e-mail at PublicComment@VWD.org up to 90 minutes in advance of the meeting. Comments received are handled by the Clerk of the Board of Directors as if submitted in person. All written comments that are received at least 90 minutes before the meeting will be provided to the Board, and a record of the receipt of comment will be noted during the meeting. To comment during the meeting or to watch or listen to the live meeting, go to www.vwd.org/meetings. Board meetings are also televised on San Marcos TV. For more information, visit www.san-marcos.net/smtv.