Utilities Under Fire: Why Rate Hikes Are A Scary Proposition

I have a valued contact who works for a water utility in California, where water issues are a daily concern for providers and customers alike. One would think that the prospect of not having adequate water service would peak customers’ concerns, but it’s the prospect of losing about $20 per month that seems to worry them more — or at least the angriest, loudest of them. The reaction is scary, in fact.

Here’s a picture sent in from the anonymous utility worker, taken during a “water district takeover” staged outside a utility board meeting. I’ll withhold the name of the municipality as well, so as not to impeach the community at large; the display represents only a specific faction, though a sizable one. “We had 100 to 300 [ticked] off people in our building,” my source estimated. 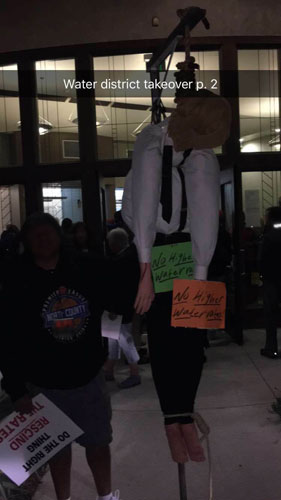 Yes, that’s a hypothetical water district representative being hanged in effigy. Though this method of expression is a long-standing form of protest, it’s also a bit heavy-handed — for these times, and for the situation. After all, the rate increases are not motivated by profit, but to give the municipality the means to deliver a safe, sustainable water supply to its customers — including those who threaten them, even if it is figuratively.

“I've grown accustomed to the threats … something new every day, like this sign” said the utility worker, a water conservation representative for the water district. “The reason? We raised the base rate up $20.” 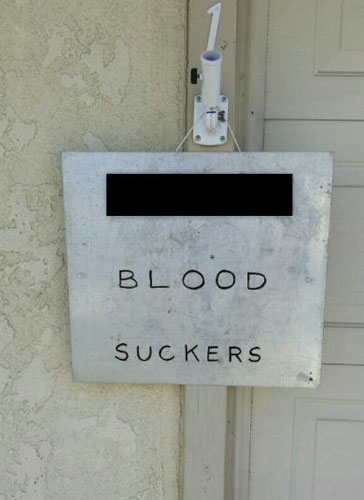 This is freedom of speech at play, of course, and the voice of the people should be heard. But this somewhat extreme reaction to a rate increase highlights the importance of public outreach and ‘value of water’ campaigns. While $20 may be an admittedly large percentage increase in relation to a typical monthly bill, this is also said to be an affluent community, and what’s the price of water security?

There may be a parallel and lesson here that we can draw from another water-supply initiative that has drawn public ire, that of potable water reuse. Municipalities have learned that outreach and education prior to implementation will bolster support significantly. The first step is to whittle away at the ingrained notion among the majority of Americans that clean water is virtually free and endlessly available. Nowhere in the country should this fallacy be more evident than in drought-plagued California, yet these pictures reveal that it is still an uphill battle in many cases.

As my embattled source attests, “The struggle is real.”