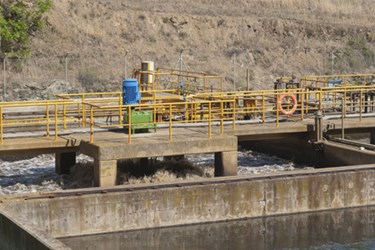 There are many different treatment processes available to remove odor from foul air. Some processes force the air through a vessel containing a bed of activated carbon pellets where the odor compounds are adsorbed onto the carbon and clean air is released. Other processes force the air through a scrubber vessel, which acts like a “chemical shower” where the odor compounds in the air react with chemicals in the “shower” and are oxidized and removed before the clean air is released. Still other processes force air through biologicallyactive compost or a vessel containing plastic biological media where the odor compounds are captured and biologically oxidized for food, releasing clean air to the environment. These are only three common technologies for odor control, but virtually all other odor treatment processes also require a vessel containing a bed of media or a reaction chamber where the removal process takes place.

There are also design criteria used by engineers to design these different odor control processes. These criteria establish the minimum and maximum dimensions of the vessels, volumes of media, airflow rates, odor concentrations, and many other design conditions recommended by manufacturers or shown to be successful in past applications.

One of the most common design criteria is called “empty-bed contact time” or EBCT (also called “empty bed residence time” or EBRT). No single design criteria has been more used, and potentially misused, than EBCT. EBCT simply refers to the amount of time (usually in seconds) that air must spend in contact with the media or the contact chamber inside the process vessel. With no real basis in science or technology, this rule-of-thumb design criteria has persisted in odor control processes due to its simplicity. EBCT is calculated without regard for the volume of the physical media, hence the name “empty bed.” The fact that the volume occupied by the media is not considered in the EBCT calculation makes EBCT a convenient but inaccurate design criteria. Different media with different densities and shapes will perform differently although the EBCT is identical. But how much inaccuracy is built into the EBCT varies by process. 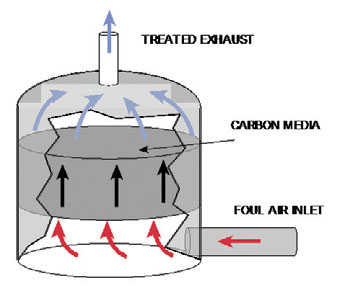 The required carbon media volume is determined based upon the balance of several factors including vessel diameter, carbon type, and empty bed air velocities. Media bed air velocities between 50 and 100 feet per minute (fpm) are recommended, with 60 fpm being used in most municipal odor control cases. Combined with the maximum recommended media depth of 3 feet (based upon head losses), this results in a 3-second EBCT for the media. Although EBCT is used by engineers as part of the design process, it is based on the results of common scientific principles plus standardized carbon testing using prescribed testing procedures (e.g., ASTM D-6646 in the case of activated carbon). ASTM stands for the American Society for Testing and Materials, which has published standard test procedures for most everything related to engineering, materials, and the environment. The testing is performed in strict accordance with approved written testing procedures. Since the EBCT design criteria for activated carbon odor control systems is based in large part on science and standardized testing, the inaccuracy impact is low.

Chemical Scrubbers
Figure 2 illustrates the basic components of a standard chemical-based odor control scrubber. The vessel commonly contains a plastic chemical-resistant packing, which provides a large surface area for the chemical-laden water pumped up through spray nozzles. The high surface area allows direct oxidation of odor compounds by the chemicals in the water. A small volume of the scrubbing liquid is allowed to drain out the oxidized byproducts. This volume of water is replaced by makeup water and fresh chemicals.

Chemical scrubbers are designed based upon the surface area of the plastic packing in the vessel, water and chemical concentrations and flowrates, and media contact time. The typical media EBCT for a chemical scrubber is between 2 to 4 seconds, with 3 seconds being common.

Biological Odor Control
Biological odor control processes are still considered a new entry into the odor control technology field, despite a 25-year history of excellent performance in the U.S. Biological odor control started with the development of “biofilters,” which force odorous air through different types of organic and inorganic media designed to grow biological organisms. As the air is forced through the media, naturally present soil bacteria acclimate and grow on the media while consuming and removing the odor compounds before releasing clean air. Figure 3 is an illustration of a early in-bed, organic media biofilter. 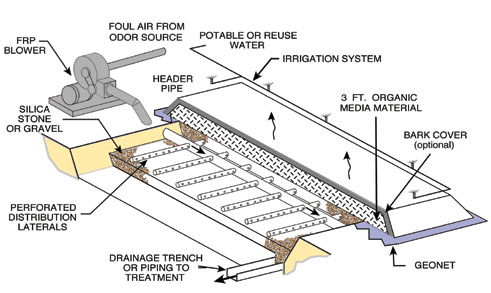 These biofilters used compost, crushed wood products, large tree bark, and many different types of media, all with different shapes, sizes, tree types, and densities. While engineers learned how to control and operate these biofilters through trial and error, there was no standardized media testing. Many mistakes were made using media that were too fine, too coarse, too weak, too large, etc. The biofilters that worked well were scrutinized just as much as the biofilters that failed, but there was no concensus on the reasons to adopt any of them, so the only common criteria that was adopted by most designers was EBCT. Since EBCT for an in-ground biofilter is directly related to media depth and foul air flowrate, these criteria were, and still are, major design criteria.

The early biofilters that worked well had widely varying EBCT values. Evaluation of the EBCT data discovered that EBCTs below 60 seconds usually resulted in poor performance, while those above 60 seconds generally performed well. As a result, 60 seconds became the de facto EBCT for organic media biofilters. Further sampling and measurement of the exhaust from these biofilters revealed that approximately 20 seconds of EBCT was required to remove H2S (hydrogen sulfide), while the other 40 seconds were required to remove the volatile organic compounds (VOCs) in the inlet air. Even flawed, the EBCT of 60 seconds seemed to work.

However, it is easy to see that the different sizes of media (from fine compost to large sticks and branches) have vastly different surface areas, porosities, unit weights, and head losses. Over the ensuing years, engineers have been able to sample more and more inlet and outlet odor concentrations, drainage water constituents, and other operating parameters to assist with design criteria, but the lack of specific testing protocols (such as ASTM) places major design emphasis on the old EBCT criteria, which is used to this day. Although the EBCT design criteria is seriously flawed for organic media biofilters, it continues to be a point of contention in the design of these very effective and important odor control technologies.

Some vendors of packaged biofilters advertised lower EBCTs for their products because they are “better” and deserve a lower EBCT design criteria. In fact, with no other standardized guidance criteria, a lower EBCT results in a smaller biofilter, which translates into lower cost. Some package system suppliers advertised extremely low EBCTs for their systems without any basis in fact that they would work at that rate, simply to be lower cost and win the job. It is often claimed in the literature that a certain packaged biofilter “only requires 20 seconds of EBCT to remove the odor” when, in reality, the fine print says “odor is H2S,” not VOCs. Of course, it is known that VOCs require twice the time to remove as H2S, but the ploy works.

Biotrickling Filters
The same situation has happened with biotrickling filters. The basic process of a biotrickling filter is illustrated in Figure 4. Biotrickling filters (BTFs) are specialized biological odor scrubbers in that the biology is grown in special plastic media with very high surface areas, permeabilities, and odor removal rates. The odorous air is collected and forced through the specialized plastic media where certain species of biology grow to consume and remove the odor compounds. Irrigation water is sprayed on the top of the media and nutrients are added in some cases.

It is important to note that some researchers and manufacturers have invested heavily to test and progressively improve their biotrickling filter media to make it more effective and cost-efficient. This investment has allowed some structured biotrickling filter media providers to greatly outperform older-style media. Testing has shown that some new-generation biotrickling-filter-structured media have greatly surpassed the performance of earlier and more common media. Naturally, this investment is protected with patents and a certain amount of old-fashioned secrecy to prevent copying and ensure their market advantage.

While some manufacturers can claim total odor removal with much lower EBCTs (based upon higher-performing media), the engineering community is still skeptical of these claims in the absence of additional supporting design criteria.

Summary
It is clear that biological odor control technologies are in need of additional standardized design. It is not that the sampling and testing methods necessary to calculate the specific odor elimination rate (or specific odor compound elimination rate) in grams/day/cubic foot of media are not available. Nor is it that we lack the knowledge of how to establish standardized testing for biotrickling filter media so that we can consistently provide highquality odor controls. We simply lack the organization, the will, and the determination to prepare the standardized criteria and persuade ASTM to include these criteria as part of its program.

James Joyce, PE, has more than 36 years of experience in wastewater odor and corrosion control, and has written six manuals of practice and more than 50 peer-reviewed technical papers. Joyce has managed more than 500 odor and corrosion remediation projects worldwide and has conducted numerous technical workshops, seminars, and lectures. He holds bachelor’s degrees in biology and civil engineering and a master’s degree in environmental engineering from Virginia Tech.