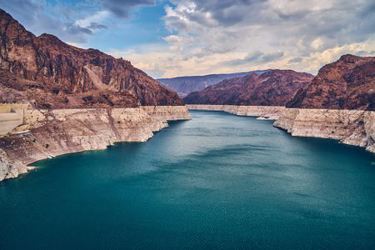 As pervasive water scarcity in the American West continues to set records and force unprecedented changes, recent emergency action taken by the seven states that use Colorado River water is one of the starkest reminders yet of just how severe the problem has grown.

“The U.S. Department of Interior asked the states to consider a deviation from the existing operating rules — to hold back 480,000 acre-feet in Lake Powell,” The Nevada Independent reported. “While such a move would bolster the water elevations at Lake Powell, curbing an immediate risk of hydropower losses, it would accelerate the physical decline of Lake Mead by about 7 feet. Over the past two decades of drought, the country’s largest manmade reservoir has dropped, with a notable bathtub ring marking where the water line once stood when the lake was full.”

The current rules governing Colorado River water would mandate the federal government to release 7.48 million acre-feet of water downstream to Lake Mead, a critical source-water body for Arizona, California, Nevada, and Mexico. But Lake Powell is also becoming a dwindling source-water body for thousands of consumers, as well as an imperiled source of electricity.

This first-ever decision to hold back on the mandated release is indicative of how prolonged and intense this current drought has become.

“After the driest two-decade stretch in 12 centuries, both Mead and Powell fell below one-third of their capacity last year, throwing the Southwest into crisis,” according to New York Magazine. “All of that makes the Southwest’s deliberations over the Colorado River a window into how climate change is putting pressure on divisions embedded throughout American society.”

Across historic water-sharing decisions like this one, drinking water contamination challenges, impacts on rates, and more, the drought has brought its share of challenges for drinking water systems throughout the country.

And even as unprecedented actions — like the decision to hold Colorado River water back — are taken, the fundamental causes of water scarcity are going to keep wreaking havoc.

“The Colorado River Basin has seen back-to-back dry years — with another below-average season of runoff expected this year,” per the Independent. “Indeed, forecasts already suggest that Lake Mead could drop below a critical elevation, triggering a new round of cuts for Lower Basin states next year.”