Turning Toxic Lemons Into Lemonade, From Algae To Biofuel 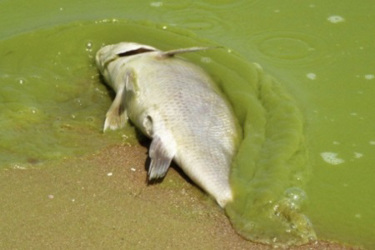 An algal turf scrubber could be the solution to a problem that threatens to suffocate the ecosystem of the Great Lakes.

Farms need an immediate fix to the algal blooms they cause despite the efforts of individual companies and farmers, said Western Michigan University chemist John Miller.

The algal turf scrubber filters water over a designated area for algae to grow and eventually be harvested for use as biofuel. That makes it an efficient solution.

Algae is 12 times more productive as an ethanol-based biofuel than alternative crops like corn, soy and switchgrass, Miller said. Unlike those other sources, its entire biomass can be harvested for energy.

He compared harvesting algae to shearing sheep: Once the metaphorical wool has grown, it can be harvested for use in fertilizer or ethanol-based biofuel.

It’s an “opportunity to couple surface water remediation with renewable fuel production,” he said. Scrubbers have already proven to be an efficient solution to prevent algal blooms in places such as Florida, where they were placed upstream of Lake Okeechobee.

Cyanobacteria blooms, which appear as a blue-green algae, have historically left parts of the Great Lakes’ surfaces with a toxic film. This film depletes the water of oxygen, killing the surrounding natural life.

These blooms grow quickly from July to October when temperatures increase.

When algal blooms become harmful to an ecosystem, they’re classified as harmful algal blooms. What characterizes such blooms is an algae overgrowth that contains toxins, chemicals and pathogens.

Lake Erie in particular has been overwhelmed by harmful algal blooms as a result of nutrient runoff from farms, scientists from the National Oceanic and Atmospheric Administration say.

To truly eliminate the threat would require a complete revamp in how Midwestern farmers operate, experts say.

Some companies are creating a new model of farming that emphasizes more efficient fertilizer and better soil health, which would lead to less runoff into local waterways.

Despite individual efforts, no large-scale change in farming practices have happened yet, according to Miller.

Algal turf scrubbers offer a more immediate solution than a systemic change in farming practices by removing nitrogen and phosphorus from surface water. This prevents the blooms at their source, Miller said.

Addressing harmful algal blooms further upstream is much more practical than changing farming practices, Miller added.“By the time those nutrients get to the bodies of water, the problem is too big,” he said.

The problem with getting algal turf scrubbers operational in Michigan and Ohio has been a combination of differences in climate from more tropical areas like Florida, where water doesn’t freeze, and lack of funding from the U.S. Department of Energy, he said.

The department no longer funds ethanol research “in any meaningful way,” Miller said. Even in small-scale production, given proper funding and research, algal turf scrubbers could quickly improve water quality, wetland habitats and the vibrancy of ecological communities, Miller said.

Damian Carrieri, a chemist and algal researcher at Seattle-based Lumen Bioscience, said algae can “produce renewable ethanol that is better for the environment than corn-based or sugar-based ethanol.

“This technology works, but is still costly mostly because of the cost of growing and harvesting algae at large scale,” Carrieri said.

Miller agrees. ”It’s a missed opportunity, and partly the opportunity is missed due to the difficulty in obtaining funding to bring it to fruition,” he said.

Despite the difficulty in installing algae turf scrubbers, the process is happening elsewhere.

BioProcessAlgae has a large-scale operation at its plant in Omaha, Nebraska. Company officials say it has successfully generated revenue by using bioreactors to create ethanol fuel from algae.

Company officials say they have recently opened a 5-acre production facility to process algae into viable biomass for ethanol production.