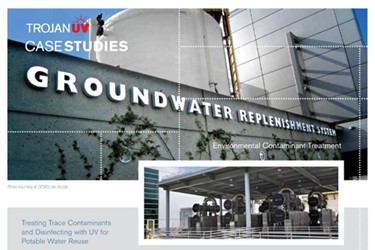 While MF and RO provide treatment for a variety of organic compounds, there are a number of contaminants that, due to their small molecular size (among other reasons), can pass through even the most advanced RO membranes. Common in wastewater, a compound known as N-nitrosodimethylamine (NDMA) is present at the GWR System as a by-product formed during upstream wastewater treatment processes. NDMA is formed primarily from the combination of certain precursor chemicals, coagulants, and chlorine in wastewater treatment plants. The NDMA molecule is considered to be carcinogenic at very low concentrations and, although it passes through MF and RO membranes, it is destroyed with ultraviolet (UV) light by a photochemical process known as UV-photolysis. In addition, using a low concentration (3 parts per million [ppm]) of hydrogen peroxide, the system initiates an oxidation reaction that destroys other contaminants such as pharmaceuticals or industrial contaminants that have been shown to be present in secondary effluent. Together with the other treatment processes in the GWR System, the TrojanUVPhox™ creates extremely high quality water from wastewater that would otherwise be lost to the ocean.