By Joseph A. Cotruvo

The U.S. EPA regulates total trihalomethanes (TTHMs) to reduce risks from bladder cancer and other maladies, but studies suggest there are many other factors to consider.

Bladder cancer incidence in the U.S., Canada and several other countries has not changed substantially since trihalomethanes (THMs) were detected in drinking water in the early 1970s and total THMs (TTHMs) were regulated in 1979. A few have shown upward or downward trends. TTHMs are not carcinogens per se when tested in drinking water. TTHMs were regulated as general indicators for other disinfection byproducts (DBPs) that are not commonly measured or regulated. Halogenated acetic acids (HAAs) were added later. Concentrations of TTHMs in drinking water have declined since then, but there does not seem to be a detectable consistent relationship with bladder cancer incidence. The drinking water risks might not be zero, but they must be very small, if at all, compared to the multitude of bladder cancer risk factors that are known to exist. The concept of technology-based management of TTHMs in drinking water as indicators is still valid because it induces water providers to produce better-quality drinking water, but it must never result in reduced protection from microbial contaminants that are well-managed by disinfection.

The four regulated THMs are chloroform (trichloromethane, TCM), bromoform (tribromomethane, TBM), dibromochloromethane (DBCM), and bromodichloromethane (BDCM). THMs were first detected in drinking water in the early 1970s by a brewery chemist in the Netherlands using headspace analyses (Rook, 1974), who was skeptical at first but eventually published the results. It was later confirmed and expanded upon by U.S. EPA chemists (Beller et al, 1974). THMs and other DBPs are formed by halogenation and oxidation reactions between chlorine and organic carbon that is naturally present in source waters. It is interesting that gas chromatography technology was slow in being applied to water, because it had been used in organic chemicals analysis and research since the late 1940s (Cremer, 1949), and equipment was becoming available in the 1950s. Analytical sensitivity has improved as better detectors were produced.

The National Toxicology Program provided high-dose lifetime bioassay data for TCM by corn oil gavage in rats and mice (NTP, 1976). Rats devoloped cancers in the kidney and mice in the liver. In other corn oil tests, TBM produced a few tumors in only the high-dosed rats (NTP, 1988); BDCM produced kidney and liver tumors in mice and kidney and large intestine tumors in rats (NTP, 1987); and DBCM produced liver tumors in mice but no effects in rats under the test conditions (NTP, 1985). The EPA later produced cancer risk assessments based upon the assumption that they were non-threshold carcinogens. Corn oil gavage studies are even more remote than the usual high-dose bioassays because they involve unrealistic dose rates and the possibility of metabolic interactions between the chemical and the corn oil. There were other and later studies in drinking water and diet that conflicted with the NTP corn oil results (NTP, 2006).

The EPA initially regulated TTHMs in 1979, well before all of the testing had been reported. The initiator for regulation was the positive TCM data; the other THMs were included by structural analogy and preliminary mutagenicity results. The regulation was not directly based upon the toxicology but was technology-based, using TTHMs as indicators of the presence of many DBPs concurrently produced but not measured. The maximum contaminant level (MCL) was set at 0.100 mg/L (100 μg/L, 100 ppb) as an annual system average, which was technically and economically achievable and could be implemented in water supplies without adversely affecting the significant benefits of microbial disease reduction of chlorination. The EPA revised the TTHM MCL downward to 0.080 mg/L with less carcinogenicity data and applied it as annual averages on a sampling site basis in the water distribution system (NPDWR, 1998).

Retesting in drinking water did not produce cancer conclusions for any of the four TTHMs. TCM was later determined to be a threshold carcinogen, but only at doses much higher than occurred in drinking water, which means that it should be assessed with a safety factor applied to doses below which there is no risk (Jorgenson, 1985). The individual EPA maximum contaminant level goals (MCLGs) for the THMs are now TCM, 0.07 mg/L; DBCM, 0.06 mg/L; BDCM, zero; and TBM, zero. The TCM could have been considerably higher, because the EPA very conservatively and arbitrarily assigned drinking water intake as only 20 percent of the total daily exposure from all sources. For example, a more realistic 60 percent relative source allocation would have made the MCLG 0.210 mg/L, but that would have undermined the 0.080 mg/L MCL. So, the EPA treats only two of the THMs as non-threshold carcinogens. The World Health Organization’s (WHO) drinking water guidelines determined that TCM, TBM, and DBCM are not non-threshold carcinogens and calculated values with safety factors. The guideline values are TCM, 0.3 mg/L; TBM, 0.1 mg/L; DBCM, 0.1 mg/L. BDCM was considered to be a possible non-threshold carcinogen with a guideline of 0.06 mg/L, but in the last edition in 2017, the WHO took note of the more recent non-cancer results in drinking water bioassays and indicated that it will reexamine the issue in the next Guidelines edition.

What are the other low-concentration DBPs that might be concurrently present with THMs, and what is their toxicology? Woo et al. (2002) provided a structure-activity assessment of 209 DBPs for carcinogenic potential. None received High ratings; High-Moderate ratings were attributed to three that are rapidly detoxified, 12 Moderate, 58 Low-Moderate, 98 Low, and 33 Marginal.

Several writers have attempted to estimate bladder cancer risks from THMs. The EPA estimated that from 2 to 17 percent of bladder cancers could be attributed to chlorination, but cautioned that it could be zero because causation had not been proven (USEPA, 2016). Others have computed values based upon hypothetical risk calculations. One (Bull, 2012) arrived at a 1/1000 lifetime risk from chlorinated water based on meta analyses. Another (Regli, 2015) estimated a lifetime incremental risk of 1/10,000 per microgram per liter (μg/L).

About 75 epidemiology studies of varying quality have been published internationally over the years. About eight studies and two meta analyses have arrived at small relative risk values in the 1.4 to 2.5 range for bladder cancer, which is the only cancer endpoint with some consistency. Hrudey et al. (2015) concluded that: “Quantitative risk estimates derived from toxicological risk assessment for chlorinated DBPs currently cannot be reconciled with those from epidemiologic studies.” Perhaps the most significant difficulty with epidemiologic studies is the large uncertainty in attempting to quantify lifetime exposures to DBPs from drinking water as well as other sources. Many assumptions and estimations must be made; thus, small-odds ratio findings drawn from imprecise exposure assessments are very problematic.

Some brominated THMs and many non-DBP chemicals are metabolized to produce a mutagenic product, so the possibility of a genotoxic mechanism may exist for them (Ross and Pegram, 2003) . There are reports worthy of further investigation of a higher risk of bladder cancer in some persons with genetic polymorphisms coding for activation of brominated THMs, and some HAAs and many industrial chemicals (Canter et al., 2010).

Bladder cancer is a relatively low-occurring cancer in most world populations. It is about 4 percent (male) and less than 3 percent (female) of annual new cancer cases in the U.S. (American Cancer Society, 2018). Its frequencies differ by region and countries. Age standardized rates in the U.S. were 19.8/100,000 in 2014 (CDC, 2017). The European Union incidence rates per 100,000 were 27.4 (males) and 5.6 (females). The highest rates were in Spain, and the lowest were in Finland, Slovenia, and the U.K. (Ferley et al., 2010). There are significant race and ethnicity factors. Rates per 100,000 in the U.S. were 21.1 (Whites), 11.4 (Blacks), 10.7 (Hispanics), 8.1 (Asia/Pacific Islanders), and 8.4 (American Indian/Alaska Native) (CDC, 2013, 2017). Bladder cancer is strongly age-related, with about 90 percent diagnosed at over 55 years and 70 percent over 65 years. The male-to-female ratio in the U.S. is about 3.5. Identified risk factors include gender, smoking, diabetes, ethnicity, and chemical exposures (aromatic amines and arsenic), with smoking accounting for about half, and with type 2 diabetes also a substantial risk contributor (American Cancer Society, 2017). Other occupational risks include mineral oils (hairdressers, painters, leather workers) and medical care (certain drugs, diagnostic ionizing radiation, renal transplants). Other associations include obesity/overweight, human papilloma virus, HIV, and prior cancers (Cancer Research UK, 2017; Chawki et al., 2015). Other studies indicate that greater drinking water consumption lowers risks (American Cancer Society, 2016; Michaud et al., 2007). Diet has not been associated with bladder cancer risk (Cancer Research UK, 2017).

Numerous epidemiological studies have examined potential correlations between TTHMs and bladder cancer. Reconciling putative drinking water risks from THMs or other DBPs that are concurrently produced with the now-known non-cancer toxicology of THMs along with the exposure uncertainties in published studies were the reasons that we (Cotruvo and Amato, 2019) undertook an ecological comparative national trend analysis of historical THM concentrations and water treatment practices. They were compared with bladder cancer incidence over the 40-plus years since THMs were identified and then regulated in many countries. Heather Amato researched and assembled the published national data on bladder cancer incidence and smoking and lung cancer incidence. The latter were included for context, since smoking is strongly associated with bladder cancer, and lung cancer and smoking rates have declined in all of the countries that were studied. 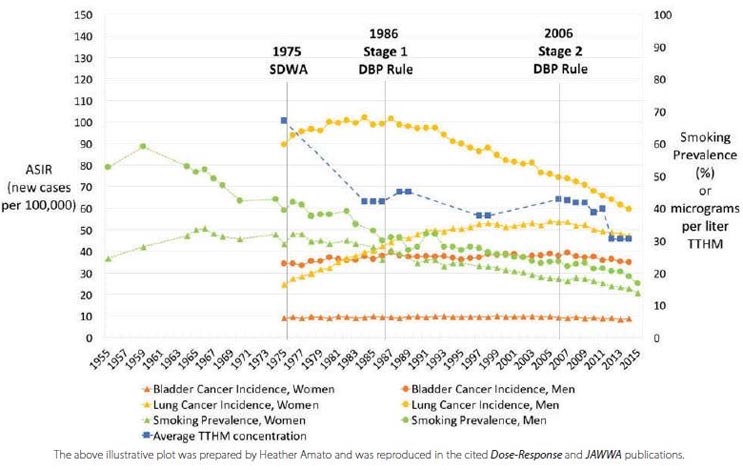 Trends in incidence of bladder cancer in eight countries in the 45 years were examined since THMs were detected in chlorinated drinking water (Cotruvo and Amato, 2019). TTHMs are the principal regulated DBPs along with HAAs. Concentrations of TTHMs have declined in most of the eight countries that were studied, as has smoking prevalence. Incidences of bladder cancer have usually stayed relatively flat, especially for females, with some variations.

The U.S. example shown in Figure 1 plots reported average TTHM concentrations over the years versus bladder cancer incidence, smoking, and lung cancer for males and females.

Average U.S. TTHM levels have declined from about 67 μg/L in 1975 to about 30 μg/L in 2015. Bladder cancer rates for both men and women were significantly different, but each was essentially unchanged during that 40-year period. Smoking rates declined by about two-thirds, and lung cancers showed a parallel decline for men but an increase for women, perhaps from prior increased smoking. Results were obtained from seven other countries.

Since THMs are not carcinogens in whole animal tests in drinking water, they may not be appropriate surrogates for studying potential cancer risks in drinking water. Etiology of bladder cancer is complex; incidence correlates with age. Previously identified risk factors include smoking, type 2 diabetes, gender, ethnicity, arsenic, aromatic amines, and several occupations. As a predominant risk factor, smoking trends probably dominate incidence rates, but additional time might be required to determine whether a DBP risk exists due to long latency periods. Published epidemiology studies linking TTHMs in drinking water and bladder cancer should be viewed with caution because of the low potential risk, exposure quantitation difficulties, and the other multiple, large-risk contributors. Causal drinking-water-related bladder cancer risks remain questionable, if at all, and are likely small compared to other factors, although surrogate-based DBP management is an appropriate strategy for maintaining drinking water quality as long as it does not compromise microbial disinfection.

Dr. Joseph Cotruvo is president of Joseph Cotruvo and Associates, Water, Environment and Public Health Consultants, with a Ph.D. in physical organic chemistry from the Ohio State University. He is board certified in environmental sciences and an adjunct professor in chemistry and of environmental sciences at the University of Toledo. At the U.S. EPA he was the first director of the Drinking Water Standards Division, initiating the EPA’s Drinking Water Health Advisory Program, and director of the Risk Assessment Division in the Toxics program. He was a member of the Board of Directors of DC Water and has over 300 publications, presentations, and articles on health risk, water quality, and safety.