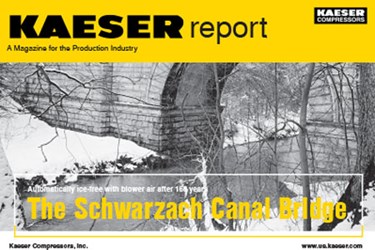 When it opened in 1846, the Danube-Main (Ludwig) Canal was an ambitious engineering project intended to put the recently founded Kingdom of Bavaria on the map as a modern industrial power. One of the two most imposing architectural monuments along the Ludwigs Canal is the large canal bridge—or aqueduct—above the Schwarzach gorge. Completed in 1844, the Schwarzach canal bridge is a historic monument. Learn how Kaeser’s Com-paK blowers help to ensure the bridge doesn’t freeze over in harsh winters to protect the structure from being damaged.