The Future Of Water Supply In Florida

A majority of water utilities in Florida have historically relied on groundwater for their drinking water supply. In 2010, Florida water utilities used 2.2 billion gallons per day (BGD) of freshwater for public water supply compared to a total of 6.3 BGD used. Groundwater represented 89% of the 2.2 BGD freshwater used for public water supply (USGS, 2013). Fresh groundwater sources at shallow depths have historically been available in abundance. Source development and treatment was relatively simple and cost effective. In coastal areas with limited fresh groundwater aquifers, utilities began to drill deeper into brackish groundwater aquifers and provided treatment in the form of desalination. As the state’s population has grown over the past several decades, so did the demand for water – in 1990 Florida’s population was around 13 million and has since increased to 20 million, with a current fresh water demand of 6.4 BGD for drinking water, irrigation, agricultural needs, and industrial uses. During that time, many small- and mid-scale groundwater systems were planned and built to meet potable water demands for the growing population.

Regulatory pressures also increased for utilities to provide more sustainable solutions for future generations. Three of the five Water Management Districts determined that in some areas of the state, fresh water aquifers had been over-allocated, resulting in salt water intrusion and adverse impacts to wetlands and surface water bodies. This also resulted in withdrawal quantities from fresh water aquifers being ‘capped’. Brackish groundwater aquifers have also been seen as a finite resource due to limited recharge from the surface to this deeper zone.

In the next 20 years, Florida’s population is expected to grow from the current 20 million residents to more than 25 million, while the fresh water demand for all uses is expected to increase by over 20 percent to approximately 7.9 BGD. The state also welcomed more than 94 million visitors in 2013 – a number expected to top 100 million in 2014. In preparation for this increased demand, each Water Management District in Florida is required by the Florida Statutes sections 373.0361(6) and 373.536(6)(a)4 to develop regional water supply plans with a planning horizon of 20 years. These long-range plans promote source diversification and identify new potential alternative water supplies (AWS), including reclaimed water, brackish groundwater, storm/surface water, and seawater.

The Florida Department of Environmental Protection reports yearly on the status of these AWS projects, including number of projects, capacity made available, and funding. Since 2005, the majority of the AWS projects have utilized reclaimed water for irrigation use and brackish groundwater for potable use. By 2013, nearly 400 AWS projects were completed having made available 427 million gallons per day of alternative water supply. Of this total, 331 of these AWS projects utilized reclaimed water or brackish groundwater (FDEP, 2013). In West Florida some large off-stream surface water storage projects have been developed due to the presence of larger rivers in that region. Highly-treated reclaimed water is not yet widely accepted as a direct or indirect source for potable water, and capital construction and annual operating costs of brackish groundwater treatment facilities are relatively high, as summarized in table below. Recently, water managers have gained a renewed interest in the development of surface water sources. So far this method has been implemented in developing systems including the C-51 aggregate mine/reservoir in Palm Beach County, Lake Point in Martin County, Cow Pen Slough at the inactive Venice Minerals mine site in Sarasota County, and Taylor Creek in Orange and Osceola counties. 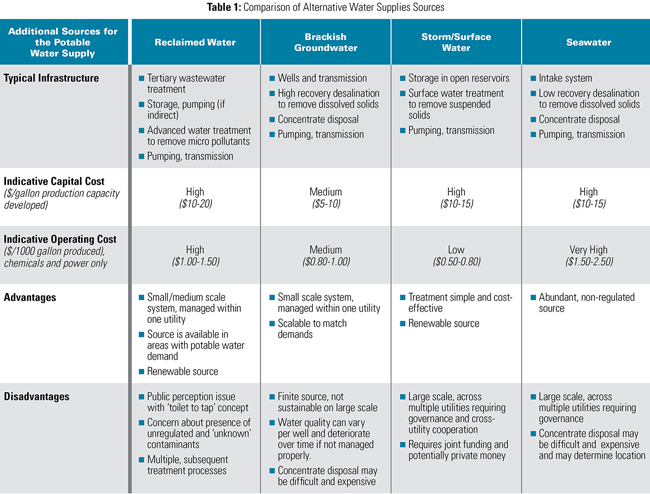 Off-stream reservoir concepts have the potential in Florida to allow for surface water development that minimizes environmental impacts. MWH Global recently completed the design and construction management services for the 6-billion-gallon Peace River Manasota Regional Water Supply Authority reservoir in Desoto County. This reservoir utilizes an off-stream reservoir design concept.  The off-stream reservoir stores excess water from the Peace River during wet seasons while the river remains a free-flowing water source and environmental requirements for maintaining a minimum flow are met.  The project was recognized with the Grand Conceptor Award by the Florida Institute of Consulting Engineers in 2010. 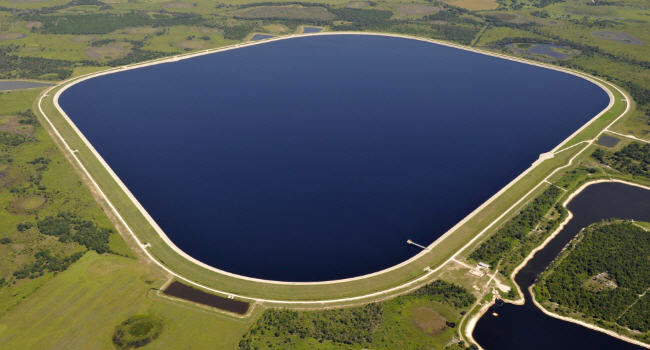 Surface water has several important advantages over other AWS sources. First, Florida has sufficient annual rainfall to make surface water a sustainable and renewable source, particularly in combination with raw and/or finished water storage. Second, the infrastructure including the required treatment processes is relatively simple and the annual operating costs are lowest of the remaining AWS options. However, depending on the location of the surface water source in relation to the water demands, the costs of reservoirs, raw and finished water pumping and transmission can be significant. Although other AWS sources will continue to be investigated for certain uses and areas, this combination of renewable source and low operating costs can make surface water very attractive in some locations where the storage and transmission costs are not cost prohibitive. Utility managers will need to work together and evaluate project life-cycle costs among the various options to identify the most cost-effective solutions for rate payers.

Water professionals in Florida are at a nexus today to define the future of water supply with the following recommended considerations in mind:

Based on recent regional planning efforts, such as the Central Florida Water Initiative, where three Water Management Districts and local public utilities are cooperating to identify sustainable future sources, water planners are on the right path. The statutory framework is already in place in Florida to allow this type of regional cooperation to advance. Forward-thinking managers seeking regional solutions will develop the foundation for long-term solutions to meet the needs for a growing population of residents, businesses and a significant visitor population.