The Cure For Membrane Biofouling 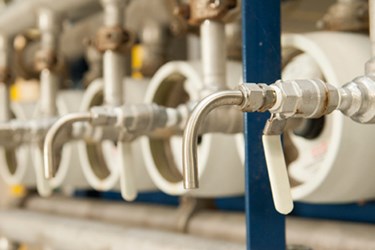 By Michele Braas and Jason Wert

As more organizations, municipalities, and companies turn to water reuse as a means to decrease their water and energy footprints and reduce costs, these groups implement technologies that often involve lowand high-pressure membrane filtration. A common challenge of membrane filtration is biofouling, which is the colonization of the membranes by bacteriological growth, resulting in decreased performance of the membrane system. Biofouling particularly concerns municipal wastewater operators in their reclamation processes. These operators must consider the cost-effective application of technology to control biofouling while ensuring the technology provides other benefits such as advanced oxidation.

At the University Area Joint Authority (UAJA), serving an area in central Pennsylvania, leaders have implemented an advanced oxidation process (AOP) to control biofouling of its reverse osmosis (RO) system. The additional system simultaneously improves the Authority’s ability to remove contaminants of concern.

The University Area Joint Authority
Surrounding Pennsylvania State University and the Borough of State College, UAJA provides wastewater collection, treatment, and water reuse to more than 80,000 residents. While not providing wastewater services to the university’s entire campus, the Authority manages the surrounding growing community’s need for longterm sustainability and watershed protection. Nearby flow the headwaters of Spring Creek, a high-quality, cold-water fishery. Because of its designation as “high quality” and the potential for temperature impacts from the heat within wastewater discharge, the Pennsylvania Department of Environmental Protection (PADEP) places strict limitations on both the quality and volume of treated effluent discharge allowed from the Authority.

The UAJA facility meets tertiary effluence standards with some of the most stringent discharge limits in the state, including a 0.13 mg/L total dissolved phosphorus standard. First constructed in 1969 with a hydraulic design capacity of 3.84 MGD, the Authority upgraded its facility first in 1992 and again in 2002. The PADEP also granted re-ratings in 1993 and 2013. Today, the site is rated for a maximum monthly flow of 10.56 MGD and 50,000 pounds per day of organic loading.

To meet the PADEP’s regulatory restrictions, the Authority implemented an award-winning water reuse program in 2002 and began operations with its new facility in 2005. It now reclaims a portion of its treated wastewater effluent to Spring Creek with water quality exceeding state and federal limits for drinking water.

The Authority also provides 1.0 MGD of beneficial reuse water to the community for swimming pools, laundromats, car washes, turf grass irrigation, heating and cooling supplies, and stream augmentation. This not only reduces the volume headed to Spring Creek but also offsets the potable water requirements within the community.

Advanced Water Treatment
The UAJA Beneficial Reuse Project Advanced Water Treatment Building houses a series of processes that transform secondary clarifier effluent into a water supply that meets all federal and state requirements for drinking water. Originally, the processes consisted of microfiltration, RO, pH stabilization, UV disinfection, and chlorination for distribution residual. After the most recent system update began operating, the Authority discovered the planned intermittent biocide treatment for water prior to its entry into RO did not sufficiently control biofouling. To stabilize pressure gains, the Authority installed a combination of chlorination and dechlorination steps prior to RO, with supplemental biocide application every few weeks.

During a periodic performance review in 2013, the Authority noted elevated salt passage and nitrogen concentrations in its reuse water. The resulting discharge was still within the required limits; however, the RO membranes had exceeded their usable life. The Authority elected to replace those membranes in 2015. With new membranes as part of the process, the organization decided to review all of its costs associated with the membrane operations, finding that its biofouling costs had risen dramatically throughout the years. Additionally, the Authority found that its equipment for on-site generation of sodium hypochlorite was worn and likely in need of a significant capital upgrade.

As part of its planning process, the Authority retained RETTEW, a firm specializing in environmental engineering, to evaluate, design, permit, and bid a cost-effective disinfection process upgrade featuring better control of biofouling, along with other water treatment advantages. Together, the partners selected a new disinfection process to reduce operational costs, improve disinfection performance, and replace the membranes.

The previously existing biofouling control method consisted primarily of injecting chlorine followed by dechlorination, as well as the periodic application of a biocide in the water stream prior to entry into RO. Operational costs for the previous planning year are shown in Table 1.

Advanced Oxidation Processes
One method to control biofouling is AOP, which destroys contaminants by oxidation using reactions with hydroxyl radicals. These radicals are one of the strongest oxidants that can be applied in water and are 200 percent more effective in oxidation than sodium hypochlorite. Hydroxyl radicals can oxidize most compounds present in water, including organic compounds, trichloroethylene (TCE), endocrine disrupting compounds (EDCs), N-Nitrosodimethylamine (NDMA), pesticides, and pharmaceuticals.

RETTEW took samples from the microfiltration effluent and provided them to various manufacturers to test for effectiveness of each manufacturer’s systems and to determine key performance indicators to dictate operational economics. As the primary goal was to provide pretreatment for RO, the limited application of hydrogen peroxide in this location did not provide sufficient experience to merit further consideration and was not included in the bench-scale testing. The process used heterotrophic plate counts removal as the key indicator of biofouling control. The bench-scale testing indicated that UV, ozone, and chlorine dioxide performed equivalent to the Authority’s existing biofouling controls and could reduce the plate counts to nondetect.

RETTEW then reviewed each alternative for implementation and economic impacts (see Table 2). All options were determined to be more cost-effective than the current treatment system.

The Authority and RETTEW also considered the potential benefits of applying technologies that could also be modified to an AOP. While the PADEP currently does not require AOP for indirect potable reuse, national trends indicate it could be dictated in the future, as the method is quickly becoming a required technology in water reuse applications similar to the Authority’s reuse system. Additionally, the U.S. EPA Water Reuse Guidance Manual suggests AOP for implementation on indirect potable reuse applications, which the Authority would ultimately pursue in later phases of its Beneficial Reuse Project. As AOP could provide this subsidiary benefit consistent with national regulatory trends and guidelines, preference was given to these technologies. Of the alternatives tested, ozone could provide the additional advantage of AOP disinfection per EPA water reuse guidelines.

While UV disinfection provided the greatest economic savings to the Authority, the potential longterm benefits of AOP by ozonation led the Authority to select ozone disinfection as the preferred method. RETTEW designed the system to allow for future higher dosages, complying with recommended AOP methodologies and providing biofouling control.

The AOP System At UAJA
The AOP process consists of an ozone gas generation system combined with support processes to inject the ozone gas into the RO feed and secondary safety structure. System requirements include the following:

A third-party vendor supplies the oxygen, which is stored in an exterior cryotank specially made for that use. When required for the process, a vaporizer converts liquid oxygen to high-purity gaseous oxygen and conveys the substance, under pressure, into the AOP system. To improve operation performance, the Authority chills its oxygen gas to a minimum of minus 60 degrees Fahrenheit dew point.

The ozone generator converts chilled gaseous oxygen into ozone gas, with a maximum capacity of 53 pounds per day of ozone at a 5 percent concentration. Additional capacity could be gained in the future by increasing the concentration of ozone in the gas. The ozone gas is first applied to a sidestream water feed through a venturi injector, and then mixed with the RO feed to the ozone contactor.

The ozone contactor is a 4,200-gallon stainless steel baffled tank designed to provide the minimum contact time for reaction. Based on the treatability study conducted, the design contact time is five minutes at a dose of 4.0 mg/L of ozone. Off-gassing is controlled through the removal of headspace gases in the ozone contactor, through an ozone destruction skid. The gas is then discharged into the atmosphere outside the building. The Authority monitors the off-gas for ozone concentration, ensuring an ozone-free discharge.

As an aggressive oxidant that would damage thin-film composite RO membranes, the Authority must quench residual ozone in the water. RETTEW adapted a portion of the existing chemical dosing system to feed liquid sodium bisulfite into the water before the RO feed, which provides sufficient removal and protection. 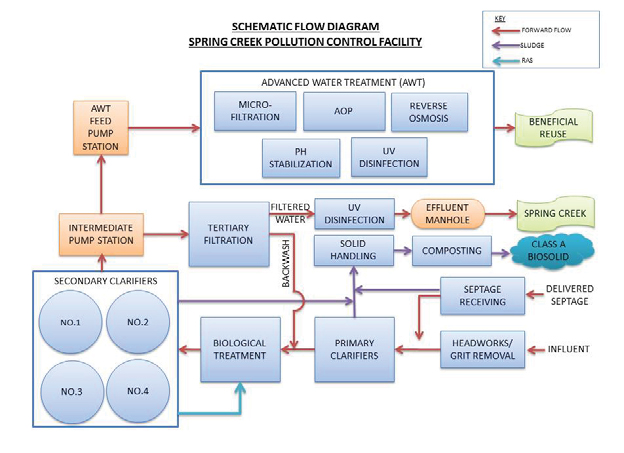 Construction
The Authority initiated construction in the summer of 2014 and began operations in early 2015. Equipment costs were lower than anticipated during the AOP evaluation, resulting in an additional $100,000 in capital cost savings to the Authority. Total project costs related to the AOP portion were approximately $800,000.

To date, power and oxygen consumption have been lower than predicted. The energy savings from the project were enough for the Authority to receive a rebate from the local electrical utility, further enhancing project returns and payback.

Operational monitoring is underway to characterize the reduction in total organic carbon (TOC) and contaminants of concern to document removal efficiencies and their impact on the RO system operations. System operations are thus far stable, not showing any performance decrease with the use of ozone for AOP, as opposed to the previous chlorination/dechlorination scheme.

Braas is an environmental engineer and the firm’s water reuse expert, engaged in projects across the U.S. She has more than 20 years of experience in designing wastewater systems and drinking water distribution systems, including coordinating design, evaluations, and implementing industrial pretreatment programs. She also manages grant applications, permitting, operation analysis, and construction-related activities.