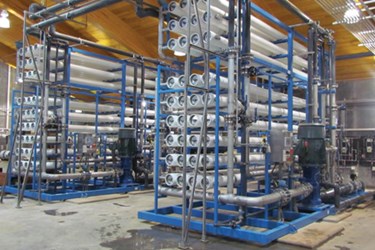 Severe drought prompts both Big Spring and Wichita Falls to recycle wastewater effluent for drinking water use. Will others follow suit?

When John Grant and his team in Big Spring, Texas, initially decided to build the first-ever direct potable reuse (DPR) facility in the U.S., they weren’t trying to make history.

In fact, Grant, the general manager for the Colorado River Municipal Water District (CRMWD), wasn’t even aware that there are only a handful of facilities worldwide that utilize DPR— the process of reusing treated wastewater as drinking water without an environmental buffer.

The CRMWD was simply looking to provide clean, safe water for the district’s consumers in Odessa, Big Spring, Snyder, and Midland during the region’s worst drought in decades.

“When we started our project back in 2002, we didn’t even intend for it to be a DPR project. We were just looking for new water supplies in our area,” said Grant. “We weren’t able to build any more surface reservoirs because we physically had no more room, most of the fresh ground water had already been developed, and indirect potable reuse (IPR) wasn’t an option because we get over 60 inches a year of evaporation.”

It took over a decade to research, test, and determine an alternative, but by May 2013 the CRMWD opened a DPR plant — which can treat up to 2 million gallons of wastewater effluent per day to drinking water standards.

The plant immediately gained national attention, and another Texas town took note. By June 2014 Wichita Falls — located 230 miles away from Big Spring  — opened the second U.S. DPR plant, which can treat up to 10 million gallons of wastewater effluent per day.

While both Wichita Falls and Big Spring use the DPR process, each plant’s methods vary slightly.

The Big Spring plant treats the wastewater effluent at a new $14 million facility using microfiltration, reverse osmosis (RO), and ultraviolet disinfection (UV). That water is then added to a raw water pipeline that also sources water from an area lake. This mix (20 percent recycled water, 80 percent raw water) is then distributed to five drinking water facilities in the region (serving a total of 250,000 people) where it is treated again using conventional drinking water treatment techniques.

Implementing DPR did not require much additional technical knowledge.

“This technology is not rocket science,” said Grant. “This is all technology we already knew how to use.”

In Wichita Falls, there was no need to build a new plant just for DPR. This is because one of the region’s lakes is brackish and so a microfiltration and RO plant already existed to treat that source water.

All that was needed for DPR was a 13-mile aboveground pipeline to connect the wastewater treatment facility to the drinking water plant. The pipeline cost around $13 million.

Like Big Spring, Wichita Falls mixes its treated effluent with raw water. Their mix is 50-50 and takes places at the same facility where it is treated again using conventional drinking water treatment techniques. The end result is distributed to roughly 150,000 people.

The long-term goals of each facility also differ. While the Big Spring plant is considered a pilot project with plans to expand, the Wichita Falls facility is only a temporary solution.

There are plans to transition Wichita Falls to an IPR facility (wastewater recycling using an environmental buffer) in the next two to four years depending on drought conditions. DPR was chosen as the first stage because the utility already had most of the technology in place. The aboveground pipeline created for DPR has been sized for IPR flow into a lake and will save the utility $6 million when they start the IPR project.

“The DPR gives us a high volume of water at a very low cost, so we wanted to do it as quickly as possible,” explained Daniel Nix, utilities operations manager for Wichita Falls. “But with DPR we have a 66 to 70 percent recovery rate because we lose some of the water in the treatment process. With IPR we will recoup almost 100 percent of the wastewater effluent, although it would be subject to evaporation for the hottest few months.”

In both Big Spring and Wichita Falls, gaining community support for DPR wasn’t as difficult as some expected. Despite the “yuck factor” often associated with water recycling, both communities were mostly supportive of the projects from the beginning. It was the dire drought conditions that convinced people that DPR was necessary, said Grant.

“In West Texas we have a better appreciation of water than other parts of the country,” he said. “We still had some who were concerned, but most people were OK with it once we provided them with information.  We held public meetings, we did news releases, we did television and radio, and we went around to civic clubs and did talks.”

Education was also key in Wichita Falls. They created a video about the DPR project, which features utility representatives, doctors, and experts from local universities talking about the disinfection process and the safety of drinking recycled water.

“The video was met with quite a bit of success,” said Nix. “We brought the media into the fold very early, we told them every step of the way what we were doing, and they’ve been getting the word out. Since we brought this treatment plant online, the feedback has been that the water tastes better than the lake water we were working with before.”

Because there aren’t any other examples of DPR in the U.S., permitting and regulating these new facilities presented a few challenges.

“The state of Texas, which is no different than any other state, does not have regulations and rules for DPR because no one has done it,” explained Nix. “So we had to work with the Texas Commission of Environmental Quality (TCEQ) to develop guidelines from scratch, and that took some time.”

For both Wichita Falls and Big Spring, extensive testing and verification was required and will continue to be required for the next several years. While there was little precedent in terms of recycled water regulations, the Clean Water Act did assist indirectly in making a DPR facility possible, explained Nix.

“The broad and far reaching regulations from 40 years ago are what make this possible today,” he said. “The Clean Water Act made changes to the way wastewater must be treated and turned into a very high quality water source. We sampled our wastewater effluent and compared it to 97 drinking water standards. With the exception of three components it was already up to drinking water standards before it was even treated.”

What’s Next For DPR?

With two DPR facilities now operating in the U.S., both Nix and Grant are confident that the verification and regulation process will get easier for their plants and other future DPR plants that may open. Already DPR is picking up steam throughout the Western U.S. The city of Brownwood, Texas, has approved a DPR project with the TCEQ but has not started construction because of public backlash. El Paso, Texas, which has had an IPR aquifer recharge project for many years, has also approached the TCEQ about the possibility of moving to DPR. In California, multiple IPR plants are in operation, and there are significant efforts underway to better understand and form regulations around DPR applications.

Nix has received calls from those interested in learning more about DPR from all over the world.

“We’ve had people call from other parts of the U.S., Israel, Australia, and the United Kingdom,” he said. “Once Big Spring and Wichita Falls are up and running for a while, we are going to prove to the world that this is viable water resource. DPR is just going to continue to grow.”