SWAN Corner: Creating And Implementing A Smart Industrial Monitoring Network And Advanced Data Analytics At The City of Memphis 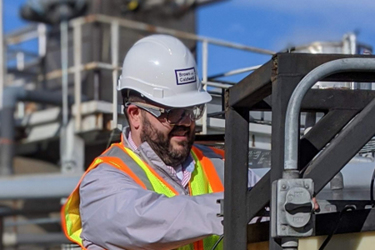 In June 2018, the Stiles Wastewater Treatment Facility (WWTF) located in Memphis, TN, experienced an abnormal event where the influent pH exceeded historic levels. With the maximum pH measured for that day greater than 11.5 standard units, the Stiles operations staff immediately notified the City of Memphis Industrial Monitoring and Pretreatment Program (IMPP). Four crews went to the field to collect and analyze grab samples from their 10 largest industrial users (SIUs) for pH, and to confirm the calibration of the industrial pH sensors. The Stiles WWTF record influent pH was attributed to three major SIUs discharging wastewater with high pH, one of which was discharging higher than its permit limit. While the City’s operations staff made operational changes to ensure no National Pollutant Discharge Elimination System (NPDES) permit violation occurred, this harmful condition killed a substantial portion of the WWTF biomass, which took over a week to fully recover.

This was not the first time a scenario like this has occurred, however it was a defining point for the City of Memphis Division of Public Works and its IMPP. The City decided there must be a better solution for monitoring its over 100 permitted industries with limited IMPP staff.

Traditional monitoring methods included the City conducting 24-hour composite sampling once or twice per year at each permitted industry, with each having their own continuous pH and flow metering equipment. While pH and flow data were collected continuously, the data were not immediately accessible to the City, as industries are only required to submit self-monitoring reports to the City monthly — long after an event may have occurred.

“The traditional way of monitoring really doesn’t tell the whole picture,” said Tasha King-Davis, City of Memphis Administrator of Environmental Compliance and Permitting, referring to the 24-hour composite and grab-sampling procedures. “[Traditional monitoring] captures only a snapshot of the industrial discharge for that day and does not show spikes in discharge water quality, which may impact operations of the collection system and the WWTF.”

The City teamed with Brown and Caldwell in late 2018 to pilot their new digital solution — a smart sensor network where water-quality monitors could be installed directly at permitted discharge points for five of the largest industrial users. The smart sensors provided measurement of pH, biochemical oxygen demand (BOD), total suspended solids (TSS), chemical oxygen demand (COD), nitrate, and a spectral fingerprint using UV absorbance over a wavelength range of 200 to 800 nanometers (nm). This data was transmitted via cellular network to a cloud-based server for visualization in near real-time.

“Having real-time data is a game-changer,” said Scott Morgan, City of Memphis Senior Environmental Administrator. “It allows staff to see what is being discharged and provides time to react if it is something that will affect the system. This is a great tool to protect our employees’ health and safety and to help ensure we maintain a healthy biomass at the treatment facility.”

For example, one holiday weekend during the pilot test, a slug discharge occurred at one of the SIUs where sensors were installed. The smart sensor network notified City staff, giving them adequate time to make necessary changes in operations to protect biomass prior to the slug discharge reaching the treatment facility.

The pilot project, in addition to supporting data collection for other projects, also served as a proof-of-concept project for the City to assess the feasibility of making a paradigm shift to digital water-quality monitoring as a long-term solution. This change in approach would enable the accessing of data in near real-time, while also minimizing O&M labor for obtaining this information, freeing up staff to prioritize time for high-value efforts. The result? The pilot project has opened the City’s eyes to a new world of possibilities for enhanced source control.

“Digital solutions have allowed the City to enhance oversight of industrial discharges without the need to increase staffing,” said King-Davis. “Instead of having to send staff to the industries to check for pH, remote monitoring continuously sends pH data to our fingertips.”

In addition, the City’s Public Works Division now has a vision of being a Smart City and wants to be a “leader in how a public utility can maximize the use and application of smart technologies,” according to Director Robert Knecht.

The City of Memphis and Brown and Caldwell are in phase two of the project, with 12 smart sensor water-quality stations installed to date, at 10 of the largest SIUs and at the two WWTFs to address corrosion in the collection system and the pH swings at the WWTFs. This phase of the project is focused on measuring and reporting pH in near real-time through using Internet of Things (IoT) technologies. Data is transmitted to a cloud-based platform where the Brown and Caldwell team ingests data and transforms it to automated data visualization. With lessons learned from the pilot phase, the City recognized that having individual logins for each monitoring station to view data was cumbersome, so Brown and Caldwell developed a solution to mitigate this issue. All data is combined into a single data viewer with the capability of filtering for individual SIUs, dates, and other data parameters. This data is then automatically converted to information using graphs, charts, percentages of noncompliance, and other performance metrics to give the City more than just a snapshot of each industrial discharge.

“The City has the ability to not only see pH noncompliance while it is happening, but also can see the duration of pH noncompliance,” according to King-Davis. “We have a better understanding of what is being discharged by industries, and if necessary, the ability to make operational changes before industrial wastewater reaches the treatment facilities and could be detrimental to our treatment process. Instead of a severe weather preparedness warning system, we have a wastewater preparedness warning system.”

In addition to the smart sensor network deployed throughout the City, Brown and Caldwell is developing an operations dashboard to consolidate numerous data sources into a unified platform. This will allow data trending for influent and effluent at the treatment facilities, energy use from SCADA systems, industrial loadings from the pretreatment program database, laboratory data from the laboratory information management system (LIMS), and other operational and performance data. Currently, another six smart water-quality sensors are being installed at both treatment facilities to provide further insight around water quality entering and leaving the treatment facilities and will support analytics to better understand treatment performance. These smart sensors will help operations staff optimize treatment, providing additional opportunities for efficient and resilient operations.

The platform is being developed in the Google Cloud, using Microsoft PowerBI and Google Big Query, with SpringML developing the data pipelines to be used for analytics. However, this is just the beginning for the City of Memphis becoming a “smart utility.”

“There are many long-term benefits to utilities who utilize new digital-based opportunities such as artificial intelligence, machine/deep learning, smart analytics, and smart technologies,” Director Knecht said. “The greatest long-term benefit of being a ‘smart utility’ is cost savings. With long-term utilization, smart technologies will reduce O&M costs and identify capital funding needs much more strategically. These savings will ultimately benefit the utility’s customers who pay for the cost of the services provided.”

John Abrera is the National Integrated Digital Applications Leader for Brown and Caldwell.