Surprising Facts From The 'Value Of Water' Poll

You may have seen the recent poll results announced by the Value of Water Coalition indicating near universal agreement (95 percent) on the need for reliable water systems, along with the somewhat surprising fact that a majority (60 percent) would agree to higher water bills to support them. The real surprise, however, is who is willing to pay the most.

The full report reveals that the lowest income earners, those making less than $40,000 annually, are ready to take a bigger financial hit for the sake of water infrastructure than higher-earning respondents. Note in the table below that 19 percent, as compared to 9 percent for the middle income bracket and 11 percent for the highest earners, would be willing to increase their water bill by more than 10 percent.

Table 1. How Much More Are You Willing To Pay? 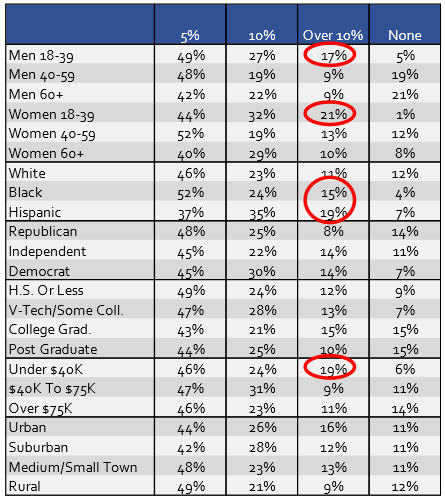 There are some other noteworthy elements highlighted in Table 1. Young people, whether male or female, are more apt to support higher rates than older generations. Though they are often knocked by older sets (including mine, the Gen Xers) for being self-absorbed, Millennials are not selfish — at least not financially, with respect to this poll and topic. Their willingness to pay more fits the narrative that Millennials are more concerned with quality of life (i.e., clean water) than the almighty dollar.

The poll also shows that black and Hispanic respondents had more buy-in for higher water rates than white respondents. “Somewhat curious is the pattern of groups willing to pay over 10 percent: Younger adults, minorities, and those with lower incomes,” the poll report summarized. 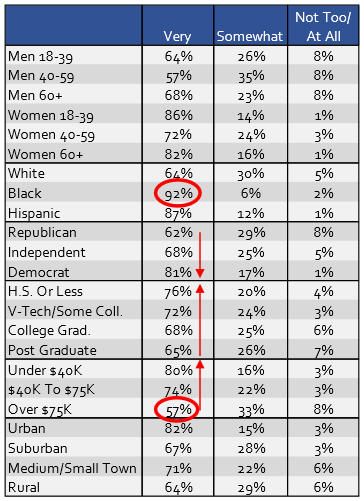 These group disparities, and how the ‘have nots’ are leading the charge, struck me as a surprising aspect of the survey. But then you think about the people affected in lead-poisoned Flint, MI — mostly minorities and low-income families, based on demographics — and it begins to make more sense.

The Flint tragedy also continues to disproportionately affect children due to the developmental impacts of lead contamination. This fact may have moved the needle more with women, who showed stronger support for water investment than men across every age group. The Flint connection is relevant not only because the situation is so recent and high-profile, but because it was explicitly referenced in survey questions.

Taken together, the results paint a picture of a “coalition of the concerned,” as described in the report’s conclusion, consisting of “women, African-Americans, Hispanics, non-college educated, lower income, and urban respondents [who] felt it was very important to improve and modernized the water infrastructure system. These groups show the most significant movement towards paying more after being informed of the water issues.”

The news is encouraging that 60 percent of those polled would pay higher rates to secure their water supply and safety, and most utilities would especially laud the “coalition of the concerned” for submitting to the top rate suggested. It’s good news because the work needs to be done and the money will have to come from somewhere, but shouldn’t the most highly educated, highest earners be on board as much as anyone?