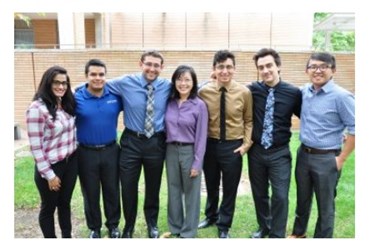 A team of students from the University of California, RiversideBourns College of Engineering was recently awarded a $15,000 grant from the Environmental Protection Agency for a reusable storm drain filter that is less costly and more environmentally friendly than currently available models.

The key innovation is the calibrated indicator and filter system. The filter is made of 100 percent recycled textiles. The indicator is a 3-D printed device made with the same material as the filter and a translucent biodegradable plastic that includes a polymer that changes from a powder to a gel when it is saturated with oil and/or heavy metals and needs to be replaced.

The filter material is a blend of 100 percent recycled polyester, rayon, and cotton fibers. Preliminary testing of the filter material show it is capable of adsorbing oil at six times its mass and that is has an adsorption capacity of between 73 to 87 percent, a figure the students believe will increase with additional refinement.

The team received the $15,000 as a phase one winner of EPA’s P3 (People, Prosperity and the Planet) competition. Team members are: Franklin Gonzalez, Karim Masarweh, Johny Nguyen, Diego Novoa, Kenneth Orellana and Taljinder Kaur. With the exception of Kaur, who is an MBA student, all the students are seniors and either environmental or chemical engineering majors. Kawai Tam, a lecturer at the Bourns College of Engineering, advises them.

The team is building on the work of several previous members who worked on this project, which is called “Sustain-A-Drain.” In 2012, one of those teams won several awards at WERC: A Consortium for Environmental Education and Technology Development design competition in Las Cruces, N.M.

The project addresses a key need for industries and business, ranging from automobile maintenance shops to food processing sites, which are required to obtain a storm water permit and implement control measures to prevent contaminated runoff from entering storm drains.

The Sustain-A-Drain system addresses both of those problems, with the indicator and reusable filter.

The system, which has been preliminarily tested in the living laboratory at UC Riverside’s Corporation Yard, where 500 campus vehicles are maintained, includes the indicator, recycled fiber filter, which sits in a metal mesh filter, as well as a water diverter and sediment catcher.

Once fully saturated and indicated, the fiber filters will be cleaned with a biodegradable detergent. The problem with that process is that it results in wastewater with the oils and heavy metals that have been removed from the filter.

In the coming months, the students plan to address that by testing a mushroom, which previous research has shown removes contaminants from water. The mushrooms breaks down contaminants to harmless compounds. The technique is environmentally friendly and potentially inexpensive.

They also plan to do further testing on the best way to clean the filter and how many times the filters can be used before it needs to be replaced.

The students believe the Sustain-A-Drain product would potentially be sold for $300, which would make it less costly than products currently on the market, which they say sell for between $350 and $500, in addition to being longer lasting because of its reusability.

About The University of California
The University of California, Riverside is a doctoral research university, a living laboratory for groundbreaking exploration of issues critical to Inland Southern California, the state and communities around the world. Reflecting California's diverse culture, UCR's enrollment has exceeded 21,000 students. The campus opened a medical school in 2013 and has reached the heart of the Coachella Valley by way of the UCR Palm Desert Center. The campus has an annual statewide economic impact of more than $1 billion. A broadcast studio with fiber cable to the AT&T Hollywood hub is available for live or taped interviews. UCR also has ISDN for radio interviews. For more information, visit www.ucr.edu.