State Of Utilities: Climate Change And The Obama Effect

The annual State of the Union (SOTU) address was met with the typical Monday-morning quarterbacking from all sides: How did the president do? Was he honest? Was he accurate?

While I have no interest in parsing President Obama’s performance here, his strong statement on climate change is worth noting for water and wastewater professionals. “No challenge  poses a greater threat to future generations than climate change,” he said. It was perhaps the most quotable moment of the night, and an emboldened stance on what is considered a controversial topic. But is it really controversial?

Let’s say it’s partially controversial. There’s a near-universal consensus, even among politicians, that the earth is warming. The Senate recently voted 98-1 in favor of an amendment stating that “climate change is real and is not a hoax.” The divide comes when the stakes are raised to “climate change is real and human activity significantly contributes to climate change,” which was asserted in a separate amendment (both amendments were attached to a Keystone XL pipeline bill). The latter failed on a 50-49 vote, needing 60 votes to pass. Therein lies the controversy, but global warming is real. As the president stated in the SOTU:

“2014 was the planet's warmest year on record. One year doesn't make a trend, but this does — 14 of the 15 warmest years on record have all fallen in the first 15 years of this century. The Pentagon says that climate change poses immediate risks to our national security. We should act like it.”

Policies aimed at reversal (or at least slowdown) of the trend are long-term tasks, fraught with politics along the way. In the meantime, utilities are seeing extreme weather in the form of both droughts and “super” storms. Conservation and water reuse can help increase the available water supply and overcome drought, but what about the problem of too much water?

Coinciding nicely with the SOTU, the U.S. EPA recently launched a tool to predict and prepare for storm surges. Focused on the American Gulf and Atlantic coasts (including Puerto Rico and the U.S. Virgin Islands), the Storm Surge Inundation Map generates interactive maps illustrating “the abnormal rise of water generated by a storm, over and above the predicted astronomical tides.” Information from FEMA’s 100- and 500-year flood maps, NOAA's Sea, Lake, and Overland Surge from Hurricanes (SLOSH), and the National Hurricane Center's coastal county hurricane strike maps are all synthesized to produce a “worst-case scenario.”

From there, it’s incumbent upon communities and utilities to protect themselves through proper planning and infrastructure upgrades. That requires capital, which is hard to come by and requires approval from stakeholders. Federal financial help may be forthcoming through the new Water Infrastructure and Resiliency Finance Center or WIFIA, but projects are more readily approved when you know exactly what you’re asking for and why it’s necessary.

Based on their work with the New York City Department of Environmental Protection (NYCDEP), and in collaboration with fellow consultants CH2M HILL, Hazen & Sawyer developed a “strategic risk and triple-bottom-line adaptation framework” for WWTPs. The framework provides a “roadmap to enhance flood resiliency … considering existing vulnerabilities, cost, and level of protection,” and was presented at WEFTEC 2014 by Hazen & Sawyer’s Anni Luck and Laura Bendernagel. The roadmap includes three phases of assessment.

Phase 1: Climate Analysis – What future climate and storm surge conditions should the utility/municipality prepare for?

The key goal of Phase 1 is to establish the design flood elevation, which can be calculated with the following formula: Design Flood Elevation = Current Surge Projections + Future Sea Level Rise

Thanks to the EPA’s Storm Surge Inundation Map, utilities now have a simple means to perform this calculation.

Phase 2: Vulnerability Analysis – What are the critical flood pathways, what infrastructure/buildings are at risk, and what are the at-risk assets worth?

Phase 3: Adaptation Analysis – What protective measures should be implemented to reduce risk while balancing cost?

The following slide from Luck and Bendernagel’s presentation details individual adaptation strategies derived from NYC’s resiliency plan, as well as their effectiveness and relative cost. 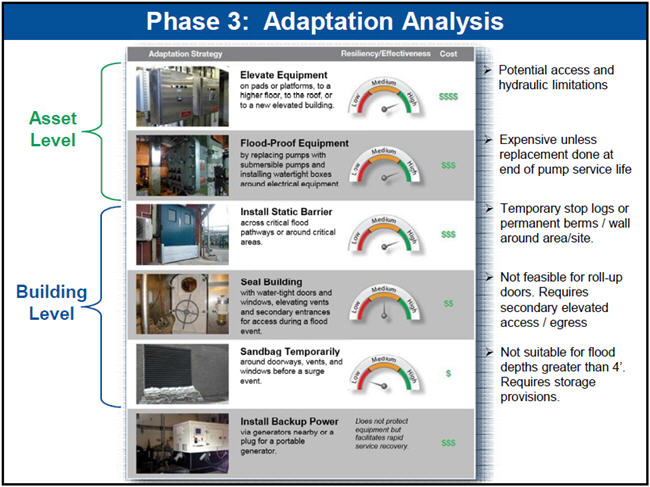 The final step is to “implement robust design standards and harden infrastructure through capital projects.” Again, knowing your situation should help garner the necessary financing.

There is certainly ample incentive to implement resiliency procedures, and now — due in part to the president’s State of the Union address — there is added public and political focus on the topic of climate change. “No challenge  poses a greater threat,” according to Obama, but will his words inspire action? Maybe not within the government, but utilities should act now to prepare for bad weather days ahead.