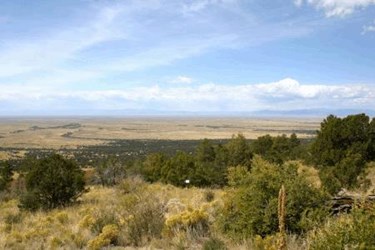 A new computer algorithm that can “fill in” underground water levels in areas where quality data is not available could lead to improved models of groundwater flow in regions where pumping and aquifer depletion are a concern.

A new computer algorithm developed at Stanford University is enabling scientists to use satellite data to determine groundwater levels across larger areas than ever before.

The technique, detailed in the June issue of the journal Water Resources Research, could lead to better models of groundwater flow. “It could be especially useful in agricultural regions, where groundwater pumping is common and aquifer depletion is a concern,” said study coauthor Rosemary Knight, a professor of geophysics in the Stanford School of Earth, Energy & Environmental Sciences.

Knight and her colleagues recently applied the algorithm to determine groundwater levels across the entire agricultural basin of Colorado’s San Luis Valley. As a starting point, the algorithm uses data acquired using a satellite technology called Interferometric Synthetic Aperture Radar, or InSAR, to calculate changing groundwater levels in the San Luis Valley between 1992 and 2000.

InSAR satellites use electromagnetic waves to monitor tiny, centimeter-scale changes in the elevation of Earth’s surface. The program was initially developed in the 1980s by NASA to collect data on volcanoes, earthquakes and landslides, but Knight and her colleague Howard Zebker, a professor of geophysics and of electrical engineering at Stanford, have in recent years adapted the technology for groundwater monitoring.

The Stanford scientists, led by former postdoctoral scholar Jessica Reeves, had previously shown that changes in surface elevation could be correlated with fluctuations in groundwater levels. However, they were only able to do so for a relatively small area because they had to manually identify and analyze high-quality pixels in InSAR satellite images not covered by crops or other surface features that could obscure elevation measurements.

The new algorithm, developed by Jingyi “Ann” Chen, a Stanford postdoctoral researcher in Knight’s group, automates this previously time-consuming pixel selection process. “What we’ve demonstrated in this new study is a methodology that allows us to find high-quality InSAR pixels in many more locations throughout the San Luis Valley,” said Chen, who is first author of the new study.

As a result, the team was able to calculate surface deformations – and, by extension, groundwater levels – for the entire agricultural basin of the San Luis Valley, an area covering about 4,000 square kilometers – or about five times greater than the area for which groundwater levels were calculated in the prior study. What’s more, the team members were able to show how groundwater levels in the basin changed over time from 2007 to 2011 – the years when InSAR data that could be analyzed by the algorithm were available.

“Jessica showed that there was useful information in the InSAR-derived deformation, and Ann has made the technique for extracting that information reliable and practical,” Zebker said.

Having a continuous map of deformation in the San Luis Valley led to the team discovering that there is a delay between the time when groundwater is pumped out of an aquifer and when the ground sinks, or subsides, in response to the water removal. These time lags might be useful indicators of the geological properties of an aquifer, said Knight, who is also a senior fellow, by courtesy, at the Stanford Woods Institute for the Environment.

“In a sand aquifer, there is no time lag between when the water is pumped out and the ground surface deforms,” Knight said. “However, if clay is present, it will take much longer to deform in response to pumping, so there will be a detectable time lag.”

The next step, Zebker said, is to take the information about groundwater levels and aquifer characteristics extracted from InSAR satellites and incorporate it with data from other sources to develop improved models of groundwater flow.

“The goal is to take into account the full water budget,” Zebker said. “This means accounting for water recharge such as rainfall and for discharge sources such as evaporation and runoff.”