Solving Water Scarcity With Reuse — The Tale Of Tucson 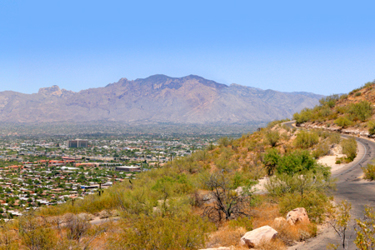 Two water leaders from Tucson, AZ, reveal how big cities can thrive in the desert, even amid  historic drought.

Water-scarcity issues are all too familiar for many people throughout the world, but Americans have largely been spared the daily worry of getting what we need from the spigot. However, that peace of mind — the privilege of plentiful water — is being challenged in the U.S., particularly in the West, due to persistent drought.

While average citizens likely don’t concern themselves until restrictions on water use are ordered, city officials and water managers must think much further ahead. It is their job to ensure the sustainability of supply for decades to come, if not longer, even as the climate warms, droughts linger, and people continue to flock to dry, sun-drenched locales.

This is the quandary for Timothy Thomure, John Kmiec, and many more of their ilk — those who keep the spigots flowing for both citizens and industry, so that services run and needs are met, and so that Americans can keep their peace of mind, but hopefully in a mindful, resource-conscious way.

Thomure is assistant city manager for the City of Tucson, while Kmiec is deputy director at Tucson Water, and together, they tackled the following questions about the state of water in Arizona and what state officials have done to improve it. Their insight is especially important because of their success, given that it can be a model for others. Read on to learn Tucson’s remedy for water shortages — a multifaceted approach that includes reuse, conservation, public engagement, and policy enactment — which should also become the way of the West and perhaps the best way forward for all of us sooner or later.

Tucson is known as a leader of U.S. cities for reclaiming water. How did that come to be?

With the advent of the Arizona Groundwater Management of 1980, Tucson became dedicated to using renewable supplies like recycled water. By 1983, Tucson constructed a tertiary treatment plant for the advanced treatment of secondary effluent received from Pima County. At the same time, Tucson began the pilot aquifer recharge program for effluent, later to become full-scale. Aquifer recharge using surface-spreading basins provided the required tertiary treatment necessary by the ADEQ [Arizona Department of Environmental Quality]. The Tucson reclaimed water system, using directly filtered water and recovered, recharged groundwater from aquifer storage of effluent, allowed the city to quickly convert irrigation uses, like turf for parks and golf courses, to the renewable supply of reclaimed water. City-funded expansion throughout the 1980s and 1990s converted most high non-potable uses throughout the community to a renewable, reclaimed water supply. By removing large volumes of water from the potable water system through the creation of this other distribution system, Tucson Water was able to manage its water supplies for drinking water in a more efficient way.

Can you describe the treatment path from wastewater to reuse?

Secondary effluent is received from the Pima County Agua Nueva facility. Traditionally, that water is either directly tertiary treated or placed in surface-spreading basins for aquifer recharge. In more recent times, the city and other water providers have been receiving aquifer recharge credit for water recharged through the Santa Cruz River. The recovered water — tertiary effluent, whether received directly from the wastewater plant or recovered from the aquifer — is then disinfected, tested for quality, and delivered as Class A water to the reclaimed water system for distribution.

How much of Tucson’s water comes from reclamation, and where is it utilized?

Has Tucson ever considered going from indirect to direct potable reuse?

To what degree do these programs require public outreach and participation?

At Tucson Water, sustainability through water conservation is a large part of our outreach. Bringing information to customers on the value of conservation and providing rebate programs for appliances and water harvesting have helped Tucson Water’s overall per capita water use to decline significantly over the decades. People don’t conserve, or become sustainable, magically. Outreach on the value of water, how the urban water cycle works, and the energy-water nexus are all important for people to understand the true value of water. Once they do understand, an ethic of conservation is created. For example, Tucson Water customers in 2021 use about the same amount of water annually as they did in the early 1990s, but with more than 200,000 people in growth.

What other plans, if any, does Tucson have to bolster its water supply?

Do you see the stress factors — population growth, drought/climate change, etc. — getting worse in the future, and how do you stay ahead of the challenge?

The first part of the answer is “yes and no.” The preponderance of climate science indicates that Tucson will continue to get warmer, although projections of total precipitation are mixed as to whether it will increase or decrease in our area and are much more uncertain. Regarding population growth, Tucson has decoupled increasing water demand from population growth over the past two decades. It is no longer a direct stressor to water supply, although it is often considered as such.

With an eye toward the future, Mayor Regina Romero and city council voted to pass differential water rates recently. This is a policy decision that, among other things, is designed to encourage conservation by charging a higher rate for water to higher users of this valuable resource.

What lessons can other water-stressed cities learn from Tucson’s experience?

Continuous community involvement on “how water works” within their community is key. When people know how their water is brought to them, they respect the process and value the resource more.

Education, conservation, and local ordinances and policies make a difference.