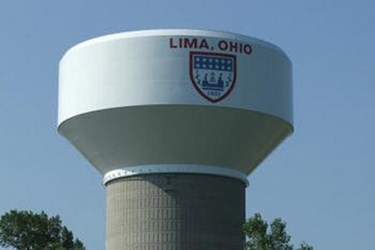 Plant upgrades for the Lima, OH, drinking water facility were nearly $14 million, and the solution chosen — post-filter granular activated carbon (GAC) adsorption — wasn’t necessarily the cheapest option. But when water quality is at stake, capital isn’t the only cost to consider.

The writing was on the wall for the City of Lima (OH) and its surface water treatment plant (WTP): Early in 2012, with the Stage 2 Disinfectants and Disinfection Byproducts Rule (DBPR) and the Long Term 2 Enhanced Surface Water Treatment Rule (LT2) bearing down, a preliminary evaluation indicated that the plant was in danger of violating the limits set for disinfection byproducts (DBPs). The 30-MGD-capacity facility, which has an average flow of 15 MGD and serves a population of 75,000, moved quickly to maintain regulatory compliance and the high water quality it had always delivered. The rule required that an adequate treatment technology be put in place by April of 2012, with reporting to start in 2013. To keep in compliance, the utility enlisted MWH to evaluate the best method to control DBPs, while also addressing periodic taste and odor (T&O) issues.

The Lima WTP relies on five upground reservoirs for its water, and is therefore subject to LT2 requirements for the inactivation of Cryptosporidium, Giardia, viruses, etc. The existing plant employed conventional two-stage treatment, featuring coagulation and lime softening followed by recarbonation, gravity/rapid sand filtration, polyphosphate addition for corrosion control, and chlorine for disinfection. The amount of chlorine needed to consistently inactivate the disease-causing microorganisms, however, resulted in the formation of DBPs.  It’s a balancing act that many utilities are becoming familiar with — one created by the U.S. EPA to ensure pathogen- and DBP-free water for every customer, especially those on the outskirts of the distribution system. Whereas the Lima WTP could previously lump together results from the quarterly samples taken at various distribution system sites to comply with DBP maximum contaminant levels (MCLs) under Stage 1 DPBR, Stage 2 dictates that each sampling point must hold up on its own. Lima’s DBPs, specifically total trihalomethanes (TTHMs) and haloacetic acids (HAA5s), would be monitored based on a locational running annual average (LRAA) — the per-site average over the course of the year. Furthermore, it was incumbent upon the utility to conduct an initial distribution system evaluation (IDSE) to find and monitor the most troublesome spots in the system.

“You have to go out and do an IDSE, then change where you sample to make it even more challenging,” stated Tim Wolfe, Americas Water Treatment Practice Leader for MWH Global. “Basically, the regulations were saying, ‘Let’s pick the worst sites you can and try to meet the MCLs at each site.’

“After Lima did their IDSE, they came to MWH and said, ‘Hey, it looks like we might have an issue here.’”

Like most any utility these days, cost was an important consideration, but not the only one. First and foremost was water quality, but also constructability, ease of operation, and what Wolfe termed “disinfection efficiency” in reference to EPA state rules regarding contact time for chlorine residual (CT = residual chlorine residual [mg/L] x effective contact time [minutes]).

“In Ohio and in many other states, when the surface water treatment rules [LT1 and LT2] came out, it basically said, ‘Thou shalt meet CT requirements at peak hour of treatment.’ State regulators told Lima, ‘Okay, you've got a 30-MGD plant. Prove you can meet CT at 30 MGD.’”

Under these parameters and without modifications, Wolfe notes, the plant’s de facto maximum capacity would be reduced to just 22 MGD, despite its 30-MGD design. Wolfe recalls the time he explained this fact to the Lima’s top decision-makers. “I remember the deputy utilities director looked at me and said, ‘Wait a minute, you want me to tell the mayor I lost 8 MGD capacity? What happened?’ I told him, ‘Well, you basically lost up to $20 million overnight,’” referring to the value of the potentially "wasted" infrastructure already put in place.

The only way to get it back, based on the options available, was post-filter GAC adsorption (learn more about CT capacity here). When the retaining of the plant-approved capacity was considered alongside the capital cost, the real value was apparent.

“I applaud the city,” said Wolfe. “They realized, ‘You know what? When you look at all the factors, this will work.’ GAC solves all of their issues: the periodic taste and odor, the DBPs, and the problem of disinfection efficiency.”

Like GAC adsorption, the BAC (“bio-bug”) options could have satisfied Stage 2 DBPR requirements by removing total organic carbon (TOC), which reacts with chlorine to form DBPs, but they failed in other areas. BAC by itself, according to Wolfe, would not sufficiently address T&O, and therefore was quickly dismissed. Adding ozone in front of the BAC filters (as Wolfe puts it, “changing spinach into mashed potatoes and gravy,” to make the troublesome organics attractive to the bugs on the filter media) solves for DBPs and T&O, but doesn’t adequately handle Crypto or resolve the lost disinfection capacity issue with Giardia.

The post-filter GAC solution clearly had more benefits, but it also required more work and to go with the upfront capital costs. 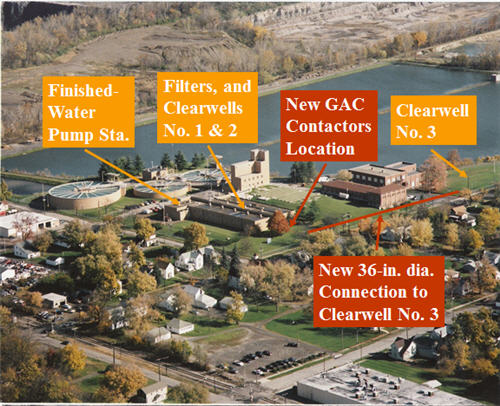 The adsorption units had to be deep enough to hold 10 feet of GAC, which needs to be reactivated once the carbon is spent. The bench-scale studies performed by MWH indicated that, based on nine-month usage (the units are offline in the winter months, when DBP and T&O issues subside), the carbon will need to be reactivated — hauled off-site, put in a furnace to drive off contaminants, then returned to the site — every two years. Total O&M costs are estimated to be $650,000/year, mainly attributable to GAC expenses, but also due to the increased energy needed for new pumping requirements. By comparison, ozonation with BAC filtration would carry an annual O&M cost of $400,000/year.

The intermediate pump station was necessary to accommodate the depth and volume of GAC, but was also utilized to serve a larger purpose. The pump station, along with some baffles and a 36-inch pipeline connection, effectively rerouted the flows through the clearwells (AKA chlorine contact tanks, which allow the disinfecting action to complete), thereby achieving “disinfection efficiency” and maintaining the plant’s full design capacity. The new, optimized flow pattern also allows individual clearwells to be removed from service for routine maintenance.

The construction wasn’t without its challenges, as the plant footprint was restrictive, with homes sitting just beyond its borders. That forced MWH to build the GAC adsorption units a bit higher and less wide than what is typical, with brick walls added to hide the units from view. The final piece of the puzzle was integrating the upgrades into the plant’s existing SCADA (supervisory control and data acquisition) system.

Before the improvements to the Lima WTP, TOC was leaving the plant at 3 mg/L, resulting in elevated levels of DBPs. As TOC was reduced to 1 mg/L, the DBPs followed suit. In the first reporting period after post-filter GAC adsorption was instituted, the third quarter of 2012, a dramatic reduction in TTHMs and HAA5s can be seen (see charts below). 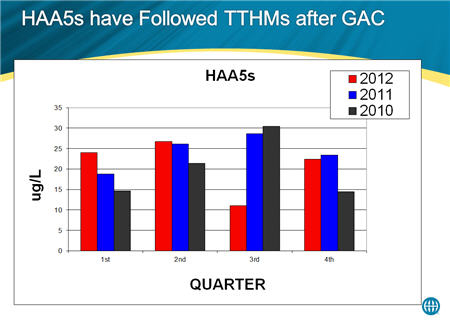 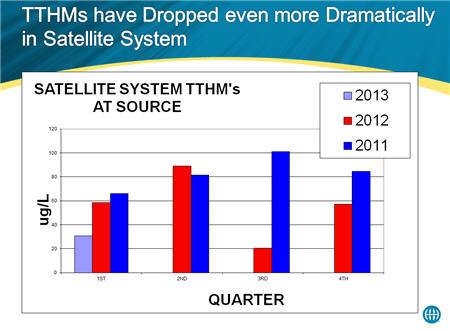 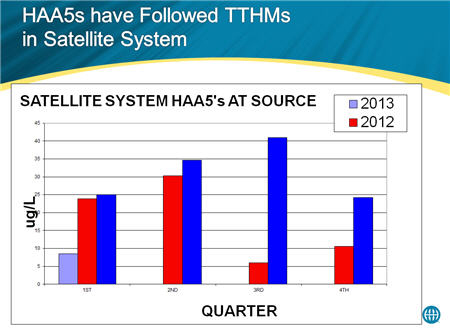 In addition, chlorine use has been more efficient and less costly. Note the year-to-year disparity, beginning in July. 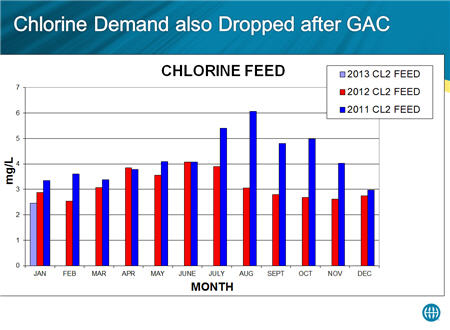 Even with less chlorine, the municipality maintains full compliance with LT2. The water is therefore verified safe — free of pathogens and DBPs — but also, though there is no chart to illustrate it, it tastes and smells better than ever.

Despite these hard economic times, the Lima WTP, in choosing the best (not the cheapest) treatment option for its facility and its customers, proved that you can’t — or, more accurately, shouldn’t — put a price on water quality.

Are you struggling with a DBP issue? How do you effectively balance pathogen inactivation and the formation of DBPs? Share your thoughts in the comments section below.