Sewer Sense: Smart Decisions About Sanitary Sewer System Is Paying Off For Utility And Customers 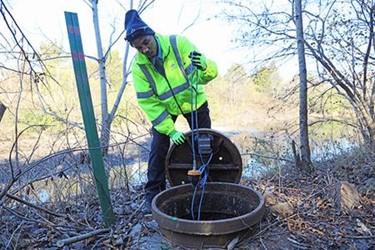 When flow levels reach a certain point, the sensors automatically trigger an alarm that alerts appropriate Service Authority staff to respond. This technology also displays a graph of the sewage flow level in a sewer main that can be viewed remotely on a laptop in near real-time.

Before purchasing these devices, the Service Authority would have to manually check the flows through manholes on an as-needed basis. This meant when large rain events were forecasted, a crew could be stationed all night next to manholes to ensure that a sanitary sewer overflow did not occur due to possible infiltration and inflow of groundwater and rainwater into the system.

“This device helps save Service Authority employees from spending overtime or even regular time on this issue, freeing them up to do other important work,” Infiltration and Inflow Manager Rob Wilson said.

“The utility evaluated the cost, and the reduction in man-hours and improved level of service more than offset the costs of the device,” added Operations & Maintenance Director Don Pannell.

“It gives us an early warning system in known overflow areas,” said Wilson. “In both of those cases, it tripped the alarm, so our Collection & Distribution crews were able to flush the lines. That prevented any inconvenience to our customers as well as insurance issues where we might have had to pay to have a few houses cleaned due to overflows.”

The Service Authority has 10 devices in operation and is interested in adding an eleventh. Since the sensors are small and easy to install, the Service Authority has been able to move the devices around to better monitor areas where backups and sanitary sewer overflows could cause environmental issues and expensive hassles for some of the utility’s nearly 350,000 customers.

This November, the Service Authority installed sensors in an industrial area near the Potomac River in eastern Prince William County as well as a heavily used commercial area of Manassas located near a large retaining pond.

The device was installed in Manassas due to concerns about how a large planned mixed-use development upstream might impact that particular manhole. While the area has not been flood-prone in the past and this fall has been dry in Northern Virginia, the current flow through that part of the sewershed is already nearing full capacity.

“After a couple of rain events, we will be able to take a snapshot with SmartCover to see what is going on at this particular manhole location before any new development occurs,” said Wilson.