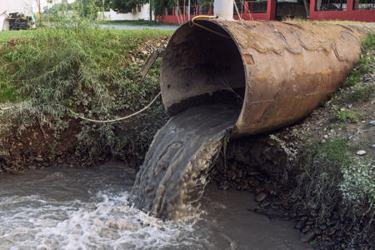 The UK has around 1,500 individual river systems, totalling over 200,000km in length. It’s common for sewers here to accept both untreated human waste and rain water in a combined system. Water and sewerage companies are permitted to release this wastewater into inland and coastal waters without treatment under exceptional conditions, such as following heavy rainfall.

Environment Agency figures, mapped by The Rivers Trust, show that there were more than 400,000 untreated discharges in 2020, lasting a total of 300 million hours. Stormwater overflows act as pressure relief valves, preventing large volumes of mixed human waste and stormwater from overwhelming the system and backing up into homes and businesses during downpours.

Numerous high-profile sewage pollution events have focused public attention on the activities of water and sewerage companies, which under existing law are required to report any sewage releases they lack permits for to the regulator — the Environment Agency in England and Wales.

Our recent analysis of pollution incident data from every water and sewerage company in England sheds light on the failings of this approach. We found that, while various companies have very different records on pollution, pollution incidents have been on an upward trend since 2018.

As much as 5% of pollution incidents from sewage treatment works and pumping stations could be going unreported. The results also indicated that pollution events which aren’t reported promptly by a company are likely to cause more severe damage to the environment.

The UK government recently amended legislation to oblige water and sewerage companies to progressively reduce damage to rivers and waterways from sewer overflows. This means the water industry will be required by law to show it has reduced the amount of untreated wastewater being released into waterways over the next five years. But by leaving it up to private companies to disclose their wrongdoing, the government is unlikely to make much progress.

Cracking Down On Pollution

Inadequate and inconsistent reporting by water and sewerage companies makes it difficult to get an accurate understanding of how much sewage pollution there really is. The government’s reluctance to toughen the protection of inland and coastal waters is particularly worrying at a time when more and more people are enjoying open-water swimming.

Wastewater releases when water flow is low, such as during dry weather, can be particularly damaging to ecosystems and bathers. This is when waters are likely to contain more disease-causing microbes, such as norovirus.

More extreme weather as a result of climate change will ramp up the strain on Britain’s ageing sewers. That will make it difficult enough reducing approved stormwater discharges. Illicit pollution incidents must be stopped entirely where possible.

Standardising the process for reporting pollution could make this process easier. In the long-term, Britain should change its combined sewerage system to one in which wastewater and stormwater are collected and dealt with separately. In the meantime, improving natural flood management by regenerating wetlands and removing surfaces like concrete where possible could also help.