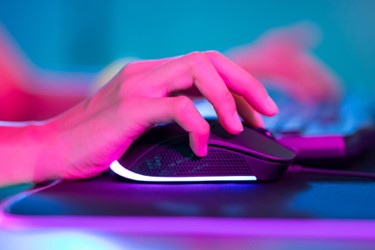 If you thought gaming was just for kids and couch potatoes, serious gaming may change your perspective — and how you manage your utility.

Fyodor Dostoevsky used to say that the degree of civilization in a society can be judged by entering its prisons. Something a lot more prosaic could be said about civilization: Its progress can also be measured by looking at its sewers. The rise of the Roman Empire would certainly not have been the same without the ability to sustain great urban centers where the occurrence of diseases and epidemics could only be controlled by installing a system that isolated waste from sources of drinkable water. Similarly, contemporary issues like climate change will be significantly influenced by how efficient and how environmentally harmful we are in disposing of the wastes we create.

As a mere computer scientist developing visualization and decision support systems, I was surprised by the fact that so many fundamental societal challenges are somehow linked to the way we store, carry, and treat water (and wastewater). When you combine that simple observation with a handful of interesting facts about how we can change human behavior, as well as some recent technological breakthroughs, things start to click together and a new picture begins to emerge on how the water industry can tackle the problem of customer engagement more efficiently than ever before.

The first idea is simply that people learn better by doing. Given the choice of reading page after page of a long report or alternatively practicing how to operate a machine by doing simulated runs, the latter will always win.

The second idea, drawn from the Socratic principles of early Greek philosophy, is that the best way to make people behave in a rational way is to make them question their own preconceptions and to enable them to arrive at the correct conclusion using their own logic. You can solve 95 percent of a problem with an engineering or a scientific solution, but often, the last 5 percent of it is about how to persuade people to make use of your solution — which will ultimately determine whether the whole exercise was a success or not.

The third idea is that technology has come so far that it is now easy and cheap to connect different participants online via a web browser, ask them to poke a computer model together, and enable them to interact with it in a way that significantly enhances the knowledge base of the individual or the group. What would have taken a team of engineers several months to build a few years ago now simply requires a single programmer and a couple of weeks of work.

These three ideas form the basis of a new form of engagement: serious games. These are games designed for other purposes than mere entertainment, and although they can take the form of simple and enjoyable activities, they can as well become challenging and complex utilitarian tasks akin to military warfare exercises that can stretch over weeks. In fact, as a training tool for engineering and policymakers, serious games could provide novel and efficient ways to teach team members to optimize complex multi-optimal problems while having to deal with their own conflicting priorities and a general lack of resources. As a customer-engagement tool, the proven ability of serious games to raise awareness, facilitate dialogue, and train for crisis response is infinitely superior to standard survey practices.

One windy evening in September 2016, in the small village of Millbrook in Cornwall, U.K., a workshop was taking place in the scout hall. The village had lately been at the center of a series of large pluvial flood events that led to catastrophic and repeated damages to many homes and businesses. The workshop, organized by the Westcountry Rivers Trust, intended to present causes of the Millbrook flood events as mostly pluvial, and to emphasize land use and natural flood management measures as potential solutions, as recommended by hydrology reports. The weary residents, unconvinced, ended up hardening their initial views on what should be done. The water operator was surely to blame for not sorting out the reservoir in the village and the drainage infrastructure. In typically understated British fashion, cups of tea were drunk, unshakably polite words were exchanged, but nevertheless, the underlying mood was electric and tense. The workshop was going nowhere and there was no satisfying outcome in view for the different stakeholders. Something different needed to be done. To resolve the problem, some specialist researchers from the University of Exeter were engaged to join the trust and a serious game was created a few months later.

Experimental results showed that the game had both an informative and a transformative effect on the participants. Not only did the game improve the players’ understanding of the problem, but it also led them to use inductive reasoning from data produced by the game to correctly confirm or reject hypotheses. As a result, more than 70 percent of the participants revised their initial assumptions about what they thought was the correct solution to the Millbrook problem. Surprisingly, considering that we only had two residents from the Millbrook community actually playing the game, there nonetheless was a significant impact on the ground. These two residents communicated with other local stakeholders and together initiated the formation of an ongoing natural flood management partnership for action in Millbrook. The Water publication resulting from that work concluded “the Westcountry Rivers Trust has stated that the Serious Game has helped to strengthen the relationship between Westcountry Rivers Trust and Millbrook residents, parish councillors, academic researchers, and local experts. They also added that this game will be a valuable tool, enabling them to communicate natural flood management concepts to a wide range of individuals across the southwest of England. They concluded that the combined effect of the aforementioned benefits has increased the likelihood that natural flood management measures will be implemented in the Millbrook catchment area.” 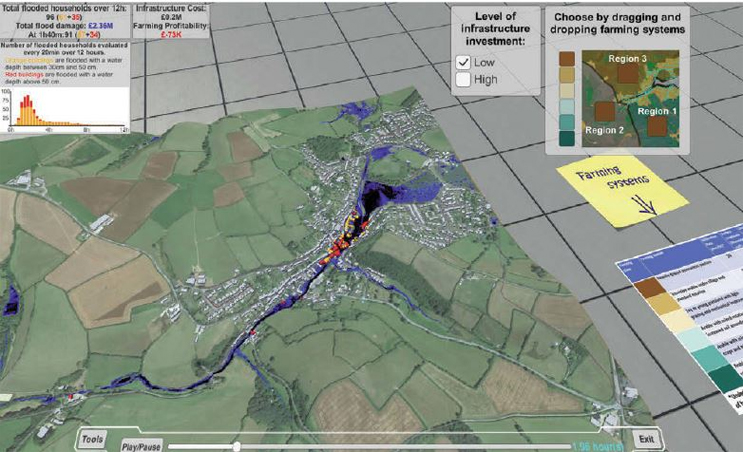 A screenshot from the Millbrook Serious Game case study

How To Do It

So, if serious games are that good, what prevents the industry from using them?

Well, nothing really, besides the fact that they are a relatively new and untested practice. The technology is ready, the need is there, and the resources available are more than sufficient to implement it. If you are interested in adding serious games to your arsenal of communication and marketing techniques, here is a three-step mini-guide on how to do it…

Sadly, the field of serious gaming is presently overtaken with lengthy reports about game design and very little real-world output. What you want is to find someone who can give a real return on your investment.

The two criteria to look for are:

Usually, you will either find someone good at programming but not so good at the evaluation, or conversely, someone good at psychology and marketing but not experienced at programming. People that have real experience in doing both are still a rarity, but it is also possible to create teams of two with these respective specialities and to get them to do the job together.

Step 2: Think about why you need a serious game before you start making it.

New tech is great, but you can sometimes do whatever you need just as well with a bit of common sense, pen and paper, and some already existing assets. Serious gaming will only be better than a series of workshops if you want to reach tens of thousands of people online at minimum cost, and you want them to understand complex problems that cannot be captured in a few PowerPoint slides.

For example, flood prevention in an urban–rural environment requires both the management of limited resources and the involvement of multiple stakeholders with different perspectives such as residents, farmers, business owners, utility companies, and policymakers. Such a complex problem would fit the bill for a serious game. On the other hand, creating a serious game just to try to persuade people to use less water at home would be a bit of a technological overkill, as there are many simpler ways to change customer behavior.

Another relevant example could be that you want customers to understand what dilemma you are facing as an operator and you want them to discover the most critical services that could be improved with limited resources. You would then like them to suggest in the most rational manner how to prioritize these services. A serious game would be a really good way to do it.

Step 3: Once you make a serious game, reuse and improve it.

The serious game will never be perfect at first. You will need people to play it several times and give you feedback until you have a better tool. But once you have refined the tool, you can then reuse it for other similar problems at minimal cost.

As Benjamin Franklin said: “When the well is dry, we know the worth of water.” With the looming environmental crisis, it is likely that getting clean water to everyone cheaply and abundantly will become more and more problematic. In fact, it will become very difficult unless we involve the help and support of everybody, including members of the public. Signs of these trying times are already visible in the tense way the regulator is starting to act towards service providers. England’s Water Services Regulation Authority has just told Thames Water to return £100 million to customers as a result of its poor performance on customer satisfaction. Staying ahead of the curve with public engagement will become vital for operators that want to survive in the context of climate change and the ensuing blame game resulting from the predictable social and political effects of resources scarcity.

Having implemented serious games for the optimization of water distribution systems, for flood prevention, and for policymaking in the context of climate change, I have come to appreciate their huge potential for training and public engagement. In fact, it is probably one of the most potent tools for connecting complex technical problems to people if set up properly. And that’s the thing: If making a game can be challenging, making a serious game is even harder. You need to add technical modeling, training capability, and — above all — you must to be able to measure the cognitive effect on the participants.

As with any investment, make sure you get the best advice from someone with experience in the domain before deciding to invest some of your hard-earned money. Be clear about your business case for building serious games for customer engagement or professional training. Beyond that, it should be known that the University of Exeter is at the forefront of the research on serious gaming applied to the domain of water and would be delighted to collaborate with members of the industry.

If you are interested in improving training and communication, maximizing customer satisfaction, and multiplying business opportunities through serious gaming, email me at mehdi. khoury@gmail.com. Or, come play with leading water experts from more than 45 countries at the WEX Global 2020 in Valencia, Spain, March 2-4, co-hosted by GoAigua and Global Omnium. Full details can be found at www.wex-global.com or by emailing info@wex-global.com.

Mehdi Khoury is an associate research fellow in the Centre for Water Systems at the University of Exeter. His main area of expertise is serious games and interactive visualizations, as well as machine learning (classifiers using hybrid techniques such as Fuzzy Gaussian Inference, evolutionary algorithms, and deep learning). As a computer scientist, Dr. Khoury’s research interests are in serious games applied to multidisciplinary problems as well as complex systems visualization and optimization. The latest research activities are focused on the development of a serious game modeling consequences of climate change on the nexus of interdependencies formed by water, food, land, energy, and climate.