Selenium has emerged as a water treatment contaminant of concern in industries such as mining, oil refining, and power generation.  In southeastern Idaho phosphate mines, selenium has been a major issue for two decades and is currently the subject of a large-scale federally mandated cleanup effort.  In British Columbia’s Elk River Valley coal mining operations, Teck Resources Ltd. is actively searching for methods to control and treat selenium discharges.  The company, which currently operates five coal mines in the region, is in the midst of investing $600 million on water diversion and treatment facilities, aquatic monitoring programs, and R&D to improve selenium management (Missoulian, 2013).

Understanding the source, fate, and transport of selenium in oil refinery wastewater is also a challenge, along with subsequent treatment, for U.S. oil refineries with a selenium limit in their National Pollutant Discharge Elimination System (NPDES) wastewater permit.  Desalter wash water originating from the sour water stripper is responsible for most of the selenium contribution to refinery wastewater.  It has been found that treating low-flow, high-concentration isolated streams in a refinery is the most cost-effective approach, both for capital and O&M costs.

Selenium is an element with symbol Se and atomic number 34.  It is located in the periodic table beneath elemental sulfur; selenium oxides (selenate and selenite) are chemically similar to sulfate.

Selenium is found in metal sulfide ores, where it partially replaces sulfur (Wikipedia, 2015).  Selenium salts are toxic at high concentrations, but trace amounts are necessary for cellular function in many organisms, including animals.  Selenium is an ingredient in many multivitamins and other dietary supplements, including infant formula.

The principal aqueous forms of inorganic selenium are selenate (Se6+) and selenite (Se4+).  Selenate is typically much more difficult to treat and remove.  Selenate predominates in oxidizing environments as SeO42-, while selenite is present in moderately reducing conditions as SeO32- or HSeO3-.  One colleague recommends differentiating the two species phonetically based on their ease of treatment:  he “likes” selenite and “hates” selenate.

Selenium is removed from wastewater principally through either biological or chemical/physical processes.  This article will describe those technologies, several technology providers, and other sources of information.

Dissolved selenium (selenite or selenate) can be biologically reduced by bacteria under anoxic conditions to elemental selenium, which is a pink-colored metal.  This process requires a carbon source to serve as an electron donor and a several-hour hydraulic residence time (HRT), similar to biological denitrification.  If nitrate is also present in the water, it will typically be preferentially reduced before bacteria reduce selenite/selenate.  The typically low concentrations of selenium to be removed mean that lower doses of carbon, including methanol or molasses, can be used compared to denitrification.  Biological treatment processes commonly require upstream treatment (to remove solids) and/or downstream treatment (to filter biomass, precipitated selenium, and possibly add dissolved oxygen) to meet discharge limits.  One advantage of biological treatment is that both selenate (Se6+) and selenite (Se4+) species are reduced to elemental selenium. 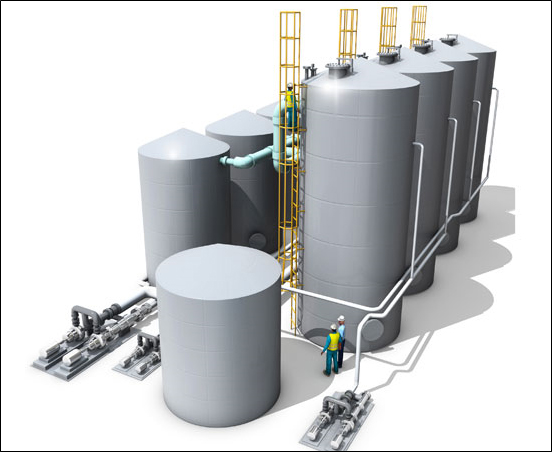 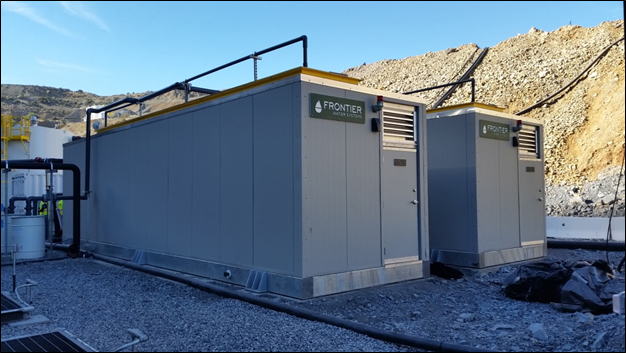 Frontier Water’s hybrid FBR containerized system for selenium removal at a California quarry.  Each of the two modules have a design capacity of 250 gpm.

Frontier Water provides a hybrid FBR system for selenium removal.  Frontier’s modular system, called SeHAWK™, has flow capacities of 50 to 1,000 gpm per unit with a smaller footprint than competitive systems.  Frontier has reportedly installed bioreactors currently removing 430,000,000 mg/yr (950 lb/yr) of selenium from U.S. waters, with HRTs as low as 40 minutes.

Constructed wetland treatment systems (CWTSs) have also been utilized to successfully remove selenium and other metals.  Nutrimens® is a nutrient source distributed by Tersus Environmental to aid the biological treatment process.

BioteQ has its Selen-IX™ process for selenium removal.This system is unique in that a small volume of spent regenerant solution is directed to a selenium electrochemical reduction step, where iron is added to form an iron-selenium solid (as in iron co-precipitation).The selenium-free solution is recycled back to the IX circuit, which concentrates the selenium into a sludge and eliminates the regenerant waste stream.

Selenite is typically simpler to remove than selenate.  Here is a summary of how the various treatment technologies can be applied to selenite and selenate.

Deep-well injection has also been used for wastewaters containing selenium.  Deep-well injection technology was installed in 2013 at a Southern California utility to resolve environmental concerns over its discharge of spent cooling-tower water to the Salton Sea (AGID, 2013).  The main concern here is the high capital cost of drilling high-capacity, deep (typically greater than 2,000 feet) wells capable of maintaining permeability over time.

For more information on selenium removal in general, contact Mark Reinsel at www.apexengineering.us.