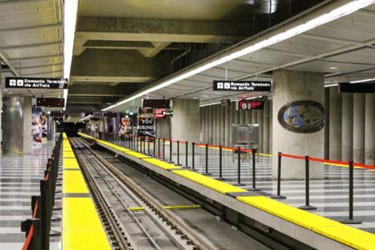 San Francisco may be best known as a hotbed for the cultural changes of the 1960s and as a hub for some of today’s leading technologies. Now, it is bringing that cutting-edge reputation to bear in the water recycling space.

For decades, millions of gallons of groundwater have pooled beneath the city’s public transportation system, Bay Area Rapid Transit (BART). Like many cities around the country, San Francisco didn’t do much to optimize this groundwater — pumping it directly into the sewer system. But local steam heat provider Clearway Energy saw an opportunity to recycle it.

“With the help of a $500,000 grant from the San Francisco Public Utilities Commission [SFPUC], the company installed a 1,000-foot pipeline and replaced aging sump pumps to transport the groundwater to its Jessie Street plant, instead of into the sewer system,” according to the San Francisco Chronicle. “The company also invested around $3 million into a water-treatment system needed to scrub brackish water of minerals and large debris that would otherwise build up in the company’s pipes.”

Despite the significant initial investment, the plan appears to be a win-win for the city and Clearway Energy. Clearway provides steam heat to approximately 180 buildings downtown by vaporizing potable drinking water, which cost it about $2.2 million last year.

“The energy center started processing the recycled water this year and is on track to save around 30 million gallons of drinking water annually,” per the Chronicle. “That’s enough to supply 2,000 San Franciscans with water for a year. The SFPUC estimates that each person in the city uses about 42 gallons of water per day.”

In a similar water recycling effort, San Francisco is treating water from rainfall and foundation drainage and using it to water trees, clean streets, and flush toilets. The Chronicle reported that his could save 15 million gallons of drinking water per year.

All told, the city is doubling down on efforts to conserve drinking water at a time when climate change may be putting it at greater risk.

“In San Francisco, and throughout California, we need to continue to prepare for the effects of climate change by being more resourceful when it comes to our water supply,” the city’s mayor, London Breed, said, according to the Chronicle.

To read more about how cities around the country recycle their water, visit Water Online’s Water Reuse Solutions Center.