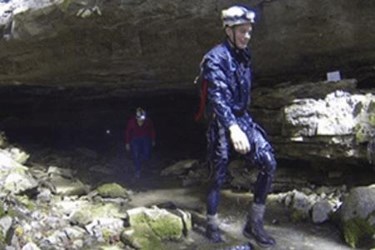 A team of students led by Lee Florea, a geological sciences professor, and doctoral student Gilles Tagne has been collecting water samples from a cave stream in an aquifer in south central Kentucky, a mostly rural area where agriculture, timber and confined animal feeding operations (CAFOs) are important to the economy.

Florea likens the area’s landscape to an airliner's black box that records everything — in this case, all that enters the caves through sinkholes. The water “may return to the surface at springs elsewhere within a matter of days,” said the faculty member, who has been studying the region for several years and has a family farm there. “The aquifer is a great source of information on water quality.”

The aquifer is in what’s called a karst landscape, which contains sinkholes, caves, springs and disappearing streams. The state’s surface geology is 55 percent limestone and has more than 4,300 recorded caves and more than 150,000 sinkholes, the Kentucky Speleological Survey notes. At least 130 caves have a mile or more of mapped passages, including the world’s longest cave system at Mammoth Cave National Park.

For the last year, Ball State’s team visited south central Kentucky to examine how water and the material it transports move through the part of the cave system studied, which includes 7.1 miles of mapped underground passages.

“There is a great deal of natural carbon in the water that comes from vegetation, but we see spikes in concentration of carbon that may result from nearby farms, mostly cattle, and CAFOs, mostly poultry,” Florea said. “In fact, south central Kentucky has scores of these poultry farms, and their waste may go from the operations and into the groundwater.

“The waste travels through the soil and rock, where some is absorbed but much still makes its way into the underground stream and rivers. Communities now have much better water sanitation systems than a few decades ago, but it’s still important that we know where the pollutants are coming from to improve our water quality and ecosystem health.”

From Africa to France to Kentucky
Tagne, a native of Cameroon, earned his master’s at a college in France. He spent three months on-site in Kentucky, collecting water samples.

“It was incredible to have the opportunity to go into the caves every day to study water movement and chemical imbalances,” he said. “Not a lot of students get that chance to spend three months studying water like I did.”

Tagne believes that experience could lead to his dream job at a nonprofit organization working on water and sanitation-based projects in developing countries.

“It is interesting to overview the research aspect of water contamination like what we are doing in Kentucky, but it could be rewarding to see that the results actually help to define new regulations and impact positively the life of a community. And this is basically what I want to do for the rest of my career as a water scientist, be able to apply my knowledge to community development projects in Africa and around the world.” 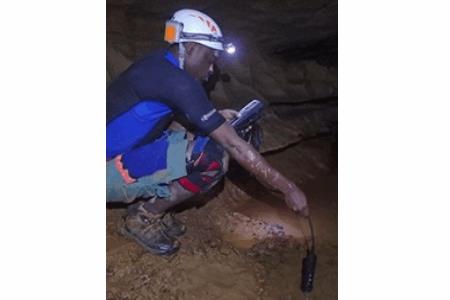 Florea and Tagne are reviewing the data collected and plan to submit research papers to peer-reviewed publications in the coming months.

“The research is very important for the people who live in that area, since whatever they put in the water could impact people living miles downstream,” Florea said.

“If they see they are impacting the same people they go to church with, then they are more likely to be more neighborly. I think they’ll be more receptive to try another strategy for their farming operations.”

Romania is the next project
Florea believes the Kentucky findings, which may show water quality’s widespread effects, could be applicable around the world and will play a significant role in his next major study. He recently received a Fulbright scholarship that combines teaching and research for nine months this year and next in the Transylvania region of Romania.

He will research groundwater within the caves of Apuseni Nature Park (known in Romania as Parcul Natural Apuseni) and teach hydrogeology, with an experiential learning module about groundwater in karst environments.

“It will be fun to take what I’ve learned over the last few years in Kentucky and apply those techniques in Eastern Europe. Besides, it’s fun to climb through caves,” he said. “We should have some interesting findings in the coming years from that part of the world, which can help us develop a global dialogue to face our many problems with environmental management.”