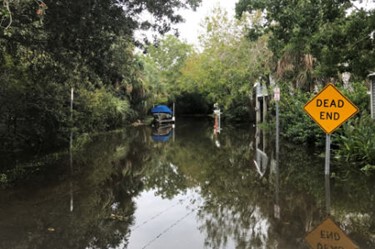 As the potential for flooding seems to rise and the necessary stormwater infrastructure needed to deal with it appears to be lacking, communities around the country are taking stock of their own resiliency measures and planning for the future. But in South Carolina — a state that has seen historic rainfall, major hurricanes, and persistent sea level rise in recent years — there seems to be debate about what that plan should be.

The state’s floodwater commission released a report in August 2019 outlining the acute flooding threats it faces.

“South Carolina has experienced numerous episodes of flooding in recent years — along the coast, rivers, and low-lying interior areas due to rains, storms, hurricanes and tides,” the report reads. “Together, these incidents highlight the need for a statewide plan to accommodate and mitigate flooding impacts in the state.”

The report goes on to make a handful of “Key Recommendations,” including the installation of artificial reefs, wetland protection, and the burying of power lines — as well as the following:

“Development of flood water channelization and the construction of reservoirs to assist with flooding while providing regions with lakefront property, business and recreational opportunities and energy.”

It is this section of the report that seems to have ignited the most debate, receiving stark criticism from a recent letter penned by the Senior Conservation Leadership Alliance, a group of retired scientists and regulators.

“The alteration of natural stream and river channels to clear the way for commercial development allows destruction of naturally functioning systems and increases flooding,” according to the letter, as reported by The State. “Likewise, creating reservoirs with associated residential development creates future flooding problems, and destroys the natural functionality of the river and associated wetlands.”

Members of the Senior Conservation Leadership Alliance include a former chief marine scientist for South Carolina’s Department of Natural Resources, a former U.S. Fish and Wildlife Service biologist, and the former dean of the University of South Carolina environment school.

“The alliance’s letter said the Floodwater Commission should have focused more on improving the safety of existing dams and having the government buy out flood prone properties,” per The State. “It says dam safety was ‘overlooked,’ even as legislators are seeking to drop regulation for most of the state’s 2,400 dams.”

The alliance also took umbrage with the call to construct artificial reefs, which it argued could make beach erosion worse.

Ultimately, the Senior Conservation Leadership Alliance was just one group of many to offer public comment on the draft summary report. A full draft report is expected to be released in November 2019, with a final version on the way after that.

But, in the meantime, South Carolina’s flooding problems are only poised to get worse as current and former officials can’t seem to agree on how to address the problem.

“Scientific research suggests South Carolina is feeling the effects of climate change, a phenomenon driven by greenhouse gases that are released from power plants and other sources,” The State reported. “Those gases are heating up the planet, causing sea levels to rise, hurricanes to become more intense and weather extremes to become more common.”