The amounts of nitrogen and phosphorus—which in excess can degrade water quality—have declined dramatically in the Potomac River since the 1980s, and are on track for further reductions, says a new COG report.

The findings of the report, Potomac River Water Quality in Metropolitan Washington, were presented today to the COG Board of Directors. The report analyzes long-term data from 1985 to 2016, rather than relying on a single year or point in time, which can be impacted by weather conditions.

Investments in and actions by the region’s wastewater treatment plants largely account for this significant progress, supporting increases in jobs and population while improving Potomac water quality.

For example, discharges of nitrogen from the region’s wastewater treatment plants have decreased by about 75 percent from their peak in the early 90s, and phosphorous by about 94 percent from levels in the late 1970s. 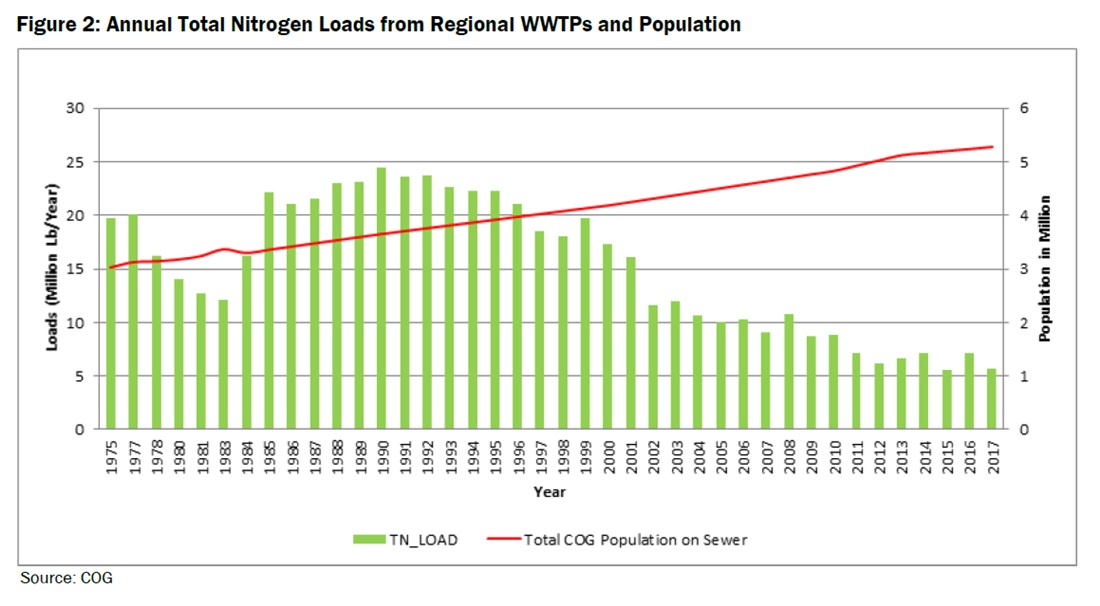 “The Potomac River serves as the primary source of our region’s drinking water, but it’s also an important economic driver for our region, so this analysis reveals we have much to celebrate,” said Jon Stehle, Chesapeake Bay and Water Resources Policy Committee Vice Chair and City of Fairfax Councilmember. “We’re thrilled to be measuring progress in the river, but we’re also observing it, with development at National Harbor, the Wharf, and Alexandria, and renewed recreation on the water.”

The report notes other key points of progress in the Potomac watershed:

More visible signs of progress include less algal growth and in turn more acres of underwater grasses—12 different species—particularly in the freshwater portion of the Potomac estuary.