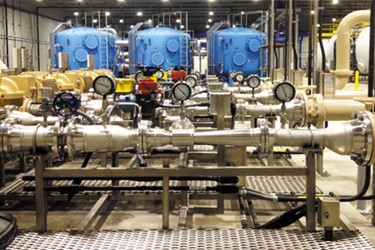 In 2008 Texas was facing an extended drought and the City of San Angelo was weighing its alternatives. The City felt the Hickory Aquifer well field was the best water option available, but this water contained significant amounts of radium and iron. Ion exchange technology was chosen to remove the radium from the water, but before that could happen, the iron would need to be removed from the water to avoid fouling of the ion exchange resin. The Hickory Aquifer Groundwater Treatment Facility typically had a flow rate of 2 - 8 MGD and pressure of 80 - 100 psi. In prepping the water for iron removal, it would be critical to sufficiently oxygenate the raw water while removing any undissolved gas bubbles—all without breaking pressure.